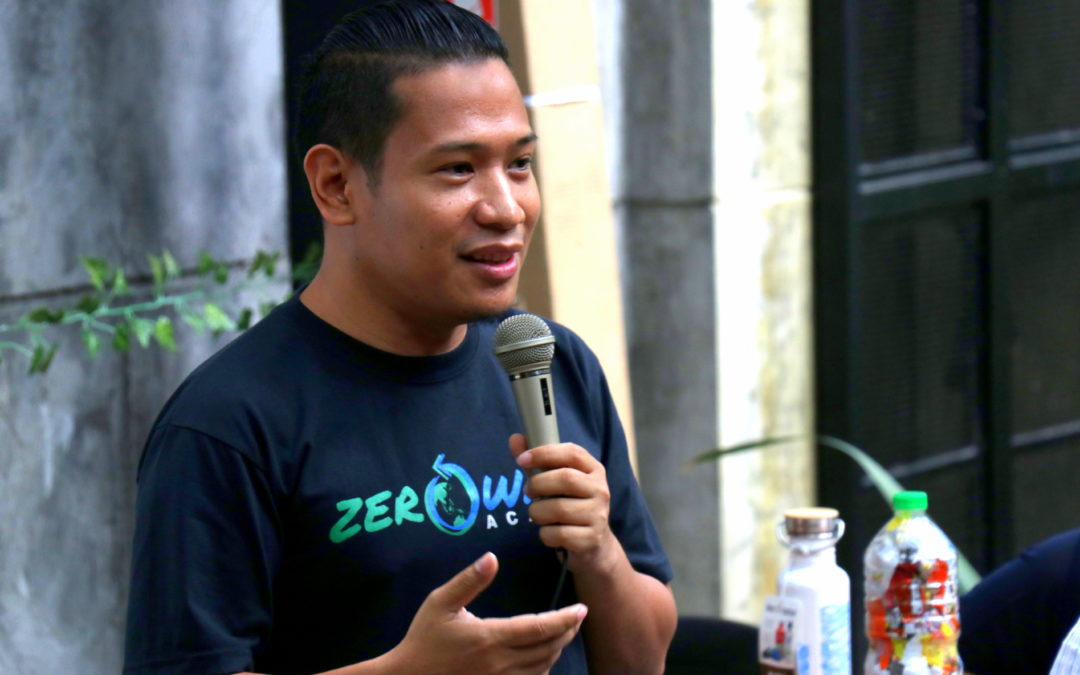 It was like a modern version of the biblical story of David and Goliath, where the young boy David took on the giant Goliath—an uneven battle that saw the underdog eventually emerging victorious.

In our version, Froilan Grate, regional coordinator of GAIA Asia Pacific and president of Mother Earth Foundation, was taking aim at not just one but many giants, represented by the world’s biggest consumer brands. If that’s already a lopsided battle, throw in the fact that Froilan was also inside the giants’ den—the brands’ very own conference, the Sustainable Brands Forum in Vancouver, Canada held last June 6. 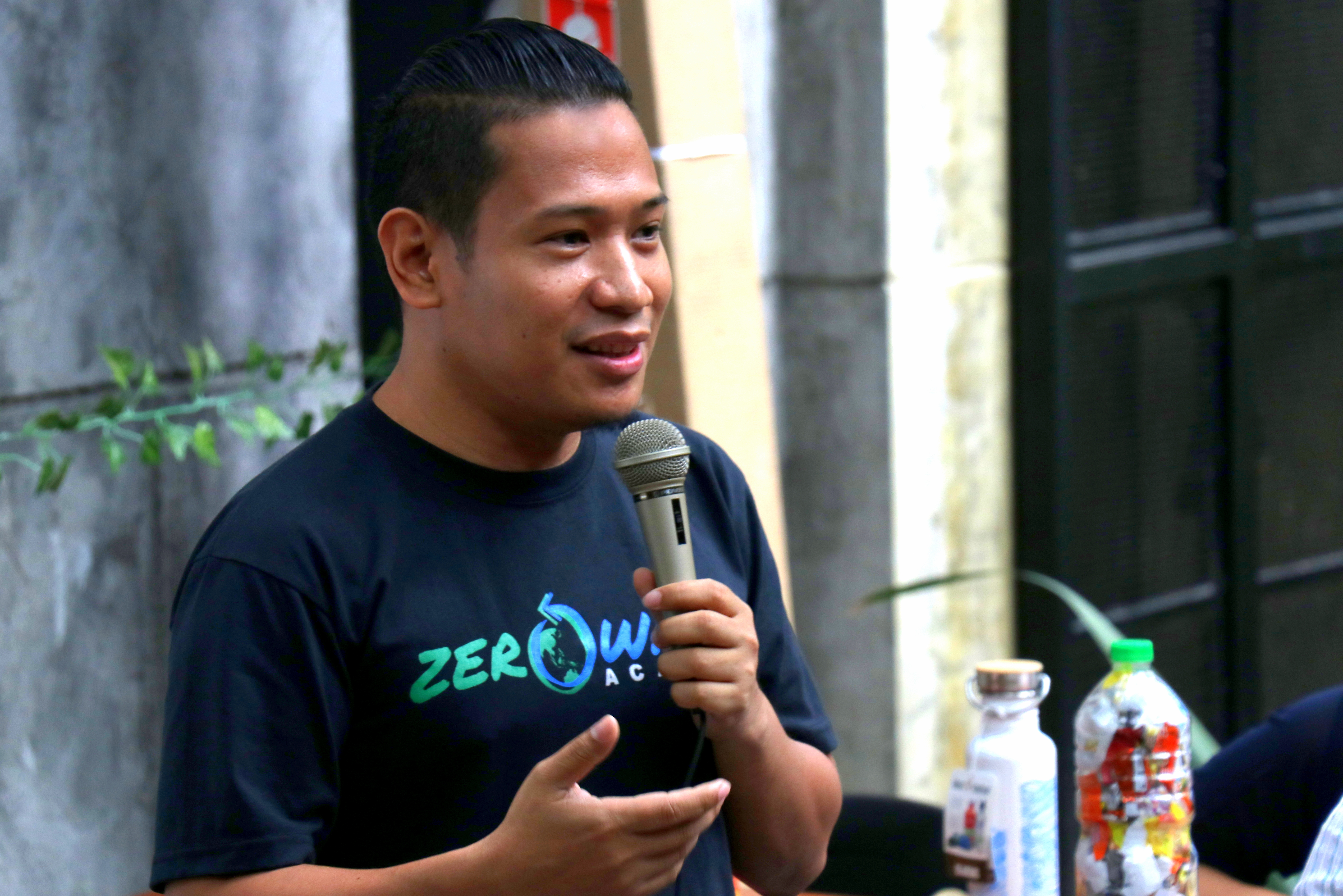 His mission: confront the top brands about their major role in the global plastic pollution problem.

Back in the GAIA Asia Pacific office in Manila, Philippines, a private hashtag was created in support of Froilan—#prayforfroi—a joke intended to make light of the situation which also conversely emphasized the gravity of what their leader was about to do.

But Froilan, in the company of friends from US-based NGOs working on plastic pollution, did not feel nervous at all. Like David, he knew he was doing it for the right cause and that he was sufficiently armed: in his hands was damning evidence that many of the companies in that conference are anything but “sustainable.”

But what brought Froilan to this battle?

From the point of view of the #breakfreefromplastic movement of which GAIA is a member, it’s about time that polluting brands are confronted with their own hypocrisy. As NGOs promoting real Zero Waste solutions, they knew that these brands are nowhere near sustainable, as the name of the conference suggests. Worse, these brands are also happily evading the responsibility of the marine pollution they are causing by passing the blame on to governments and the consumers.

But for Froilan, speaking out at the conference was not just in fulfillment of his leadership role. It was also the logical next step to his Zero Waste journey that started 15 years prior.

As a Zero Waste activist before the term was even coined, Froilan has been bringing his own reusable tumbler, lunch box, cutlery, and bags wherever he goes—for which he was generally regarded as “weird” before the trend started catching on. As staff of Mother Earth Foundation, he was deeply involved in helping barangays (villages) and cities in the Philippines in implementing the country’s solid waste management law. The law decentralizes municipal waste management down to the smallest level of government (the barangay), requires door-to-door collection of segregated waste, and establishment of materials recovery facility (MRF) in every barangay, among others.

A crucial part of the Zero Waste implementation is the at-source Waste Assessment and Characterization Survey (WACS), now popularly known as waste assessment and brand audit (WABA). Indeed, Froilan has worked too many years in various communities and contexts, and conducted too many WACS and WABAs to know that blaming the people and the government is just a tactic  corporations use so they can continue with business as usual.

“Results of the at-source brand audits we conducted in various parts of the Philippines show that corporations are the source of problems. They keep producing and using products that cannot be managed… products that can neither be composted nor recycled,” Froilan said, adding that their findings consistently showed that a huge percentage of the problematic waste are single-use plastic, most of which are branded.

Armed with data from the Philippines, Indonesia and India, and in front of an audience which included representatives from the offending brands, he challenged another commonly accepted narrative: that Asia is the source of the global plastic waste problem caused by these countries’ lack of waste management and discipline.

“Waste pickers and waste workers divert as much as 80% of waste from landfills. But why can’t they divert 100%? It’s because of the problematic products that can neither be composted nor recycled,” he said.

In an interview, Froilan emphasized that the top 10 plastic polluters are multinationals headquartered in the Global North.
“It is these manufacturers who should be tagged as the sources of the global plastic problem, not the countries they flooded and burdened with their problematic products. These consumer brands cannot, for example, sell products in sachets in their own countries. So they come to Asia, and push their products despite fully knowing that these countries do not have the infrastructure to manage the problems caused by their products,” he said.

Asked how the brand representatives reacted to his presentation, Froilan shared that a representative accused him of simply shifting the blame on to the brands, instead of encouraging the people to manage their waste well by recycling more and not littering, and demanding that governments establish efficient waste management systems.

“The accusation is not only uncalled for, but also cruel and unjust. They’re talking to someone who has been doing his part for decades and worked with communities in implementing Zero Waste programs. I know very well that even if there was an efficient waste management system and consumers composted all their organics and recycled all their recyclables, there will still be a percentage of the waste that will not be managed simply because it is unmanageable—their packaging!” Froilan shared.

Froilan emphasized that these companies have made billions of dollars out of the problematic products, so they must take responsibility for the waste their products create. “Exposing them as the top polluters is simply showing the world who is really to blame, and making them accountable,” he said.

About his experience at the Sustainable Brands Conference, Froilan shared: “I don’t have any illusion that one single talk can make companies change their minds over their product packaging. But I’m happy that the conversation has started. People are more aware now. More people are demanding change, so companies are realizing that doing nothing about plastic waste will ultimately hurt their bottom line.”