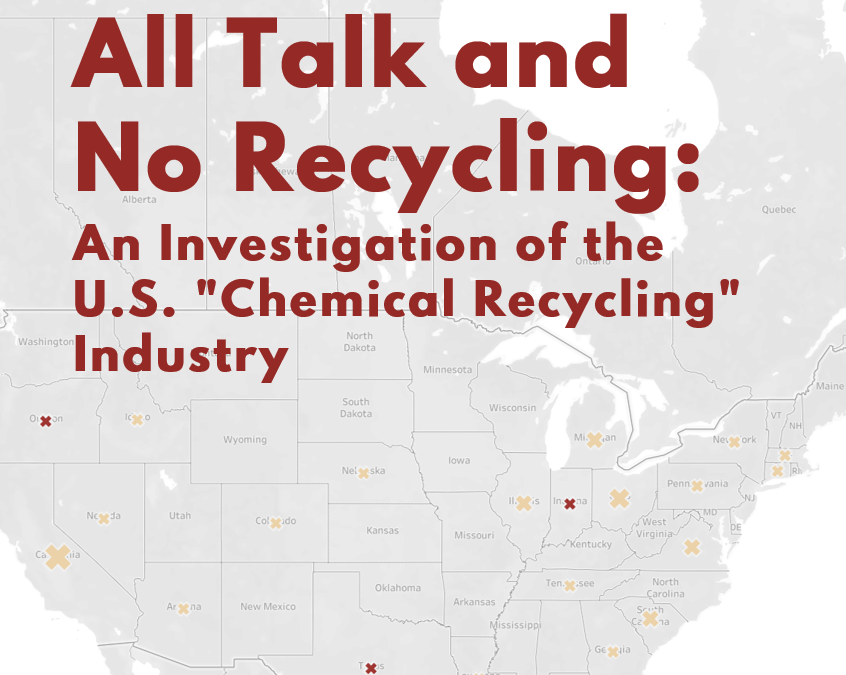 July, 27, 8am EST, Berkeley, CA—Amid overwhelming plastic pollution and an exponential rise in plastic production, the fossil fuel industry has touted chemical or “advanced” recycling as a solution to the plastic crisis. “Solving the Climate Crisis: The Congressional Action Plan For a Clean Energy Economy and a Healthy, Resilient, and Just America” by the House of Representatives’ Select Committee on the Climate Crisis, unveiled on June 30th endorses “chemical recycling,” using much of the same language also pushed by the American Chemistry Council and other players. Similar language made it into the Federal RECOVER Act, and states across the country are passing or considering industry-backed bills that would pave the way for “advanced recycling” to take root.

However, a new report by the Global Alliance for Incinerator Alternatives (GAIA) reveals that what industry in the U.S. calls “advanced recycling” is largely the opposite— turning plastic into fuel to be burned. This network of waste and burn facilities overburden low-income communities and communities of color.

The report finds other fatal inconsistencies in how the industry markets “chemical recycling” versus the reality: millions of dollars have been invested in “chemical recycling” projects, yet based on public information, out of the 37 facilities proposed in the U.S. since 2000, only 3 are currently operational and none have been proven to successfully recover plastic to make new plastics on a commercial scale. The report follows a technical assessment of chemical recycling, which found the technology to be polluting, carbon intensive, and riddled with system failures, disqualifying it as a solution to the escalating plastic problem, especially at the scale needed.

Denise Patel, GAIA US/Canada Program Director, states, “Plastics are the new villain of the climate fight, and elected officials can’t fall for industry’s claims that they have a silver bullet solution, especially when the evidence does not back up those claims. With the rising crises of climate change, pollution, and economic insecurity under the backdrop of a global pandemic, we have no more time or money to waste on dangerous tech-fixes. Policymakers need to fight climate change at the source, by pursuing policies that place limits on production and support zero waste systems.”

Dr. Andrew Neil Rollinson, chemical reactor engineer, specialist in alternative thermal conversion technologies, and author of a Technical Assessment of chemical recycling states, “Sound engineering practice and common sense shows that chemical recycling is not the answer to society’s problem of plastic waste. It represents a dangerous distraction from the need for governments to ban single-use and unnecessary plastics, while simultaneously locking society into a ‘business as usual’ future of more oil and gas consumption.”

“Industry-promoted ‘chemical recycling’ gives the false impression that we can chemically recycle our way out of this crisis, and detracts from what the US should be doing:  reducing the use of plastics. This technology has not worked in the past, cannot survive without significant taxpayer subsidies, creates few jobs and brushes aside the serious climate change and air toxics issues associated with plastic production. We urge the authors of the House report to remove the chemical recycling recommendation if they are serious about addressing climate change,”  said Judith Enck, President of Beyond Plastics and former EPA Regional Administrator.

According to the Association of Mission-Based Recyclers, “The fact that plastic-to-fuel is being labeled as “recycling” is just plain wrong, and threatens the legitimacy of the recycling industry. However, even if plastic-to-plastic chemical recycling was feasible, the sad truth is that 30 years of plastics recycling in the U.S. has failed to significantly stem the tide of plastic waste as more and more new plastics come onto the market. Chemical recycling is just another shiny new toy and is subject to failure for all the same reasons that plastics recycling has failed to scale to date.”