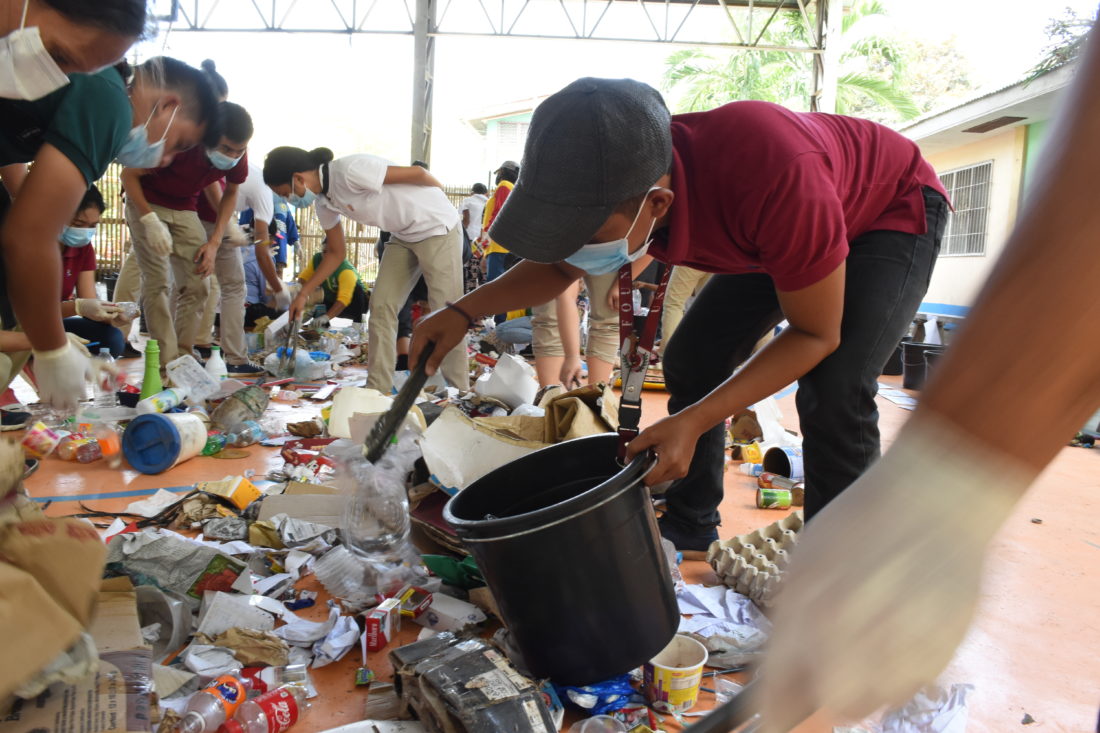 A group of environmentalists urged Dumaguete City officials to strictly enforce the plastic bag regulation ordinance and the residents to segregate their waste during the at-source Waste Assessment and Brand Audit (WABA), 27 July 2018.

Volunteers from various sectors including the youth took part in the Dumaguete at-source waste assessment and brand audit (WABA). Photo by Natasha Kunesch.

War On Waste Break Free From Plastic Negros Oriental (WOW-BFFP-NegrosOr), a collective of non-government organizations (NGOs), academics, and individuals brought together by their passion to help solve waste management challenges in Negros Oriental, noted that despite the reboot early this year of the City Ordinance No. 231 series of 2011 which regulates the use of plastic bags, enforcement remains wanting.

“We call on the city government to strictly implement the plastic bag regulation,” said Merci Ferrer, Co-Convenor of WOW-BFFP-NegrosOr. 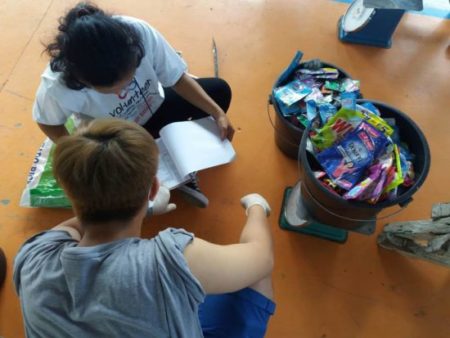 Ferrer noted that whereas the ban should be in full force now following the partial implementation in May to June through the Plastic Bag-Free Mondays at the public market, compliance is still low. The group also noticed that the majority of houses do not appear to segregate their waste.

“In our house-to-house visits, we confirmed that many households do not segregate their waste and furthermore, single-use plastics, which become residual waste, comprised a huge bulk of their waste. It is only if we segregate our waste that we are able to manage them properly. Segregation allows us to compost biodegradable waste, capture and sell the recyclables, and dispose of the problematic products properly. This then drastically reduces the amount of waste that goes into the landfill,” Ferrer added.

Since July 18, WOW-BFFP-NegrosOr, together with participants of the Zero Waste Academy (ZWA) which include representatives from Barangays Looc, Piapi and Bantayan, as well as from the City Environment Office and DILG, have been working with the three barangays conducting baseline surveys, IECs on waste segregation, and actual garbage collection to prime the residents about the need for them to segregate their waste.

The participants likewise re-worked an existing materials recovery facility (MRF) in Barangay Looc that had been sitting idle for years. They cleaned the area and added important features of an operational MRF such as various composting methods designed for both garden waste and kitchen waste. This, after they were taught about the critical steps in implementing a community Zero Waste program.

“Contrary to what many people believe, waste management is not about building structures and buying equipment. More than anything, it is about establishing an efficient system. Without such system, the structures we build and the equipment we buy will be investments down the drain,” said Sherma Benosa, Communications Officer of GAIA Asia Pacific. 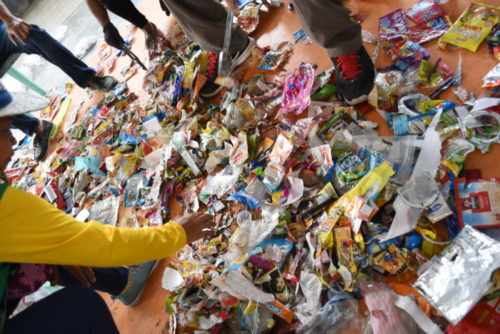 Single-use plastic packaging make up a huge bulk of the problematic waste generated by households. Photo by Natasha Kunesch.

Rap Villavicencio, Program Officer of Mother Earth Foundation, concurred, saying that in their experience, when people see that the barangay has a good program and that they are strictly enforcing it, the people would follow. “It is only at first that things seem overwhelming. As the program is strictly implemented and the people see its benefits, they follow,” he said.

The at-source WABA aims to help the communities understand the types and amount of waste generated by households and identify the companies that produce them. WABA provides information that the local government can use to develop a sound waste management plan for the community, in compliance with the Ecological Solid Waste Management Act (Republic Act No. 9003). 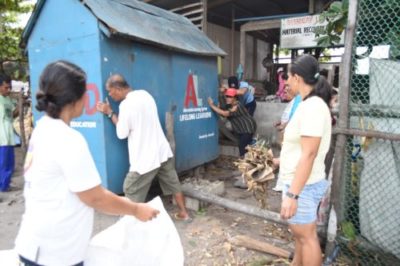 COMMUNITY IN ACTION. To transform this materials recovery facility (MRF), volunteers from the community helped the participants of the Zero Wast Academy in cleaning and enhancing the old MRF that stood idle for years. Photo by Natasha Kunesch.

The July 27 WABA was conducted as part of the just-concluded Zero Waste Academy in Dumaguete. The academy is an intensive two-week practical and theoretical training exercise that shall prime participants for all aspects of Zero Waste work, from learning about waste management in specific instances such as medical waste and organics, to designing and conducting IECs for individual households, to collecting information through baseline assessments such as the WABA, to collecting trash from households and establishing functional Material Recovery Facilities (MRF). The participants included barangay leaders, purok leaders, and barangay volunteers, City ENRO, DILG and other city representatives and participants from Siquijor.

The Academy is the start of an eight-month endeavor called Zero Waste Cities Project-Dumaguete which aims to reduce waste transported to the city’s dumpsite and promote a circular, sustainable and environmentally friendly consumption and economy. This project will focus on barangays Looc, Piapi and Bantayan which were selected owing to their urban coastal set-up and strong leadership.

“Once we have transformed the initial three barangays into mode Zero Waste communities, WOW-BFFP-NegrosOr will propose for the project to be scaled up to the remaining 27 barangays within the city, with the ultimate goal of making Dumaguete the first Zero Waste City in the Central Visayas,” Ferrer added.

The Dumaguete leg of the Zero Waste Academy is a project of WOW-BFFP-NegrosOr in partnership with MEF and GAIA. Results of the WABA will be published in the coming weeks. The ZWA is part of the Zero Waste Cities Project coordinated by GAIA Asia Pacific and funded by the Plastics Solutions Fund. 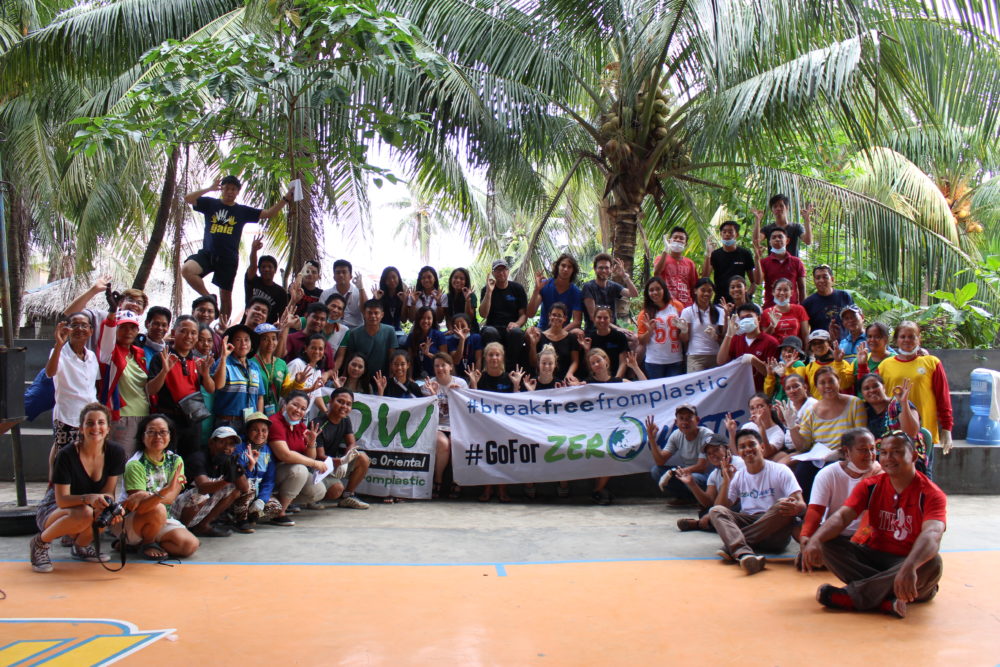 Volunteers from various sectors worked with the participants of the Zero Waste Academy in sorting, weighing, and counting the waste from 55 households in Barangay Looc. Volunteers included community leaders and members, students, members of the Marine Conservation of the Philippines, and individuals who believed in the cause. Photo by Natasha Kunesch.

Global Alliance for Incinerator Alternatives (GAIA) is a worldwide alliance of more than 900 grassroots groups, NGOs and individuals who are leading the transition toward a Zero Waste world. Together, we work with communities to advance inclusive, bottom-up strategies to address waste and pollution, grounded in the principles of environmental and social justice.

Mother Earth Foundation (MEF) actively works with various cities in the Philippines in implementing Zero Waste Programs that allowed communities and cities to achieve 70%-90% waste diversion and become recognized leaders in Zero Waste in the Philippines as well as in the Asia Pacific region.

War On Waste Break Free From Plastic Negros Oriental (WOW-BFFP-NegrosOr) is a movement of NGOs, businesses, academic, and individuals brought together by a passion to help solve waste management challenges in Dumaguete and Negros Oriental. Their campaign on zero waste helped pushed the local government of Dumaguete City to re implement and enforce its Plastic Bag Ordinance.