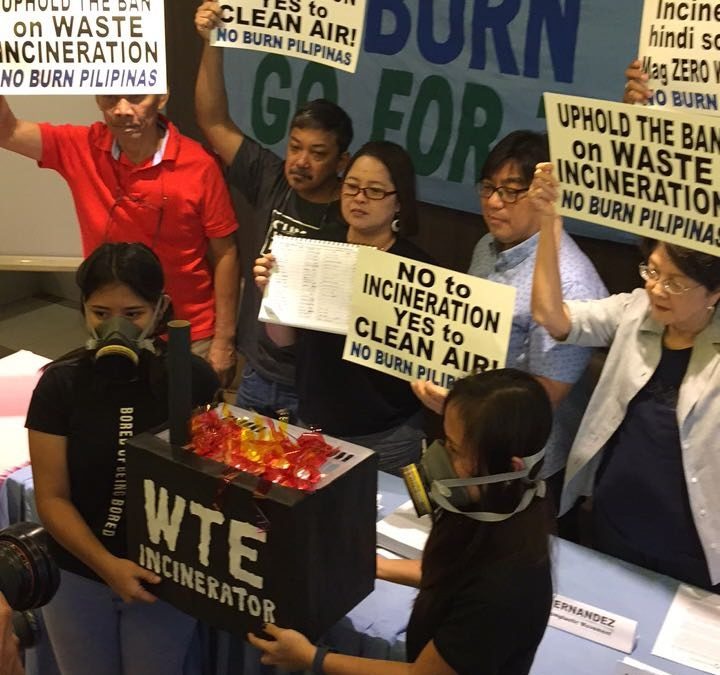 17 October 2017, Quezon City.  The government must scrap moves to repeal the waste incineration ban and stop promoting so-called “waste-to-energy” (WtE) incineration facilities.  This was the call made by more than 50 civil society groups in a press conference today in Quezon City.

The groups, under a banner alliance called No Burn Pilipinas, condemned House Bill 2286, which seeks to repeal the waste incineration ban enshrined in Republic Act 8749, the Clean Air Act, and amend the country’s landmark Republic Act 9003, the Ecological Solid Waste Management Act, in order to allow incineration in the country.  The groups also said that the Department of Environment and Natural Resources’ (DENR) promotion of WtE is not only regressive but also runs counter to their mandate to ensure a healthy environment for Filipinos. 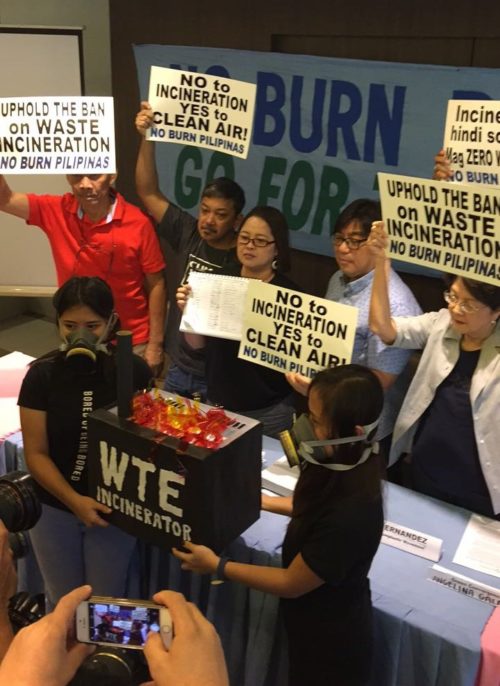 “Repealing the incineration ban is bad news for the environment, public health and local communities,” said Von Hernandez, Global Coordinator of the Break Free from Plastic movement.  “It represents a regressive move on the part of Congress, at a time when the planet is in dire need of genuine solutions to the climate and waste crisis.  Worse, it presents a triple whammy for Filipinos as so-called WtE plants translate to higher electricity costs, higher waste disposal fees, and higher risks of cancer for host communities.”

Hernandez also decried that no less than the DENR is paving the way for the resurgence of waste incineration proposals in the country, which the DENR currently promotes as “waste-to-energy,” pyrolysis or gasification plants.  “It is scandalous that the government agency mandated to implement our environmental laws is the same one working hard to undermine the spirit and intent of such laws,” he said.

“The push to revoke the incineration ban will undermine source segregation, recycling and other Zero Waste strategies that conserve resources, avoid toxic pollution and generate livelihoods and jobs.  Instead of overturning the prohibition on waste burning, Congress should, in fact, strengthen it by passing waste prevention and reduction measures complementing RA 9003 such as banning single-use plastic bags, disallowing recyclable and compostable materials in disposal facilities, curbing e-waste, and incentivizing innovations in waste management sector,” said Aileen Lucero, National Coordinator of EcoWaste Coalition.

Experiences around the world have also shown that WtE through incineration is the most expensive and most energy-intensive way to manage waste and generate electricity.  Incinerators are capital intensive and are more expensive than coal and nuclear facilities.According to the US Energy Information Administration, the projected capital cost of new waste incinerator facilities is twice the cost of coal-fired power plants and 60% more than the cost of nuclear energy facilities.  Waste incinerator operations and maintenance costs are 10 times the cost for coal plants and four times the cost of nuclear plants.

Lea Guerrero, Climate and Clean Energy Campaigner of the Global Alliance for Incinerator Alternatives (GAIA) said: “Incinerators are a costly folly.  Should these facilities be built in the Philippines the budget will be in the tens of billions of pesos.  There will also be massive increases in tipping fees by local government units (LGUs) who are already stretched for funds.  Clearly, it’s a bad investment given that it’s also the wrong way to manage waste.”

“A better alternative remains the strict implementation of the law,” said Sonia Mendoza, Chairman of Mother Earth Foundation (MEF).  “Implementing Zero Waste solutions is inexpensive and can be started immediately.  If properly implemented, results can be seen in a few months as in the case of the City of San Fernando in Pampanga.  We are calling on other LGUs to reject all incineration and WtE proposals, and instead pursue the Zero Waste approach, starting with the strict implementation of RA 9003.”