MANILA, Philippines (January 21 2020) — Filipinos favor banning single-use plastics. That is according to a recent survey commissioned by the Global Alliance for Incinerator Alternatives (GAIA) and conducted by the Social Weather Stations (SWS) which highlights the Filipino people’s strong support for a national ban on single-use plastics (SUPs). 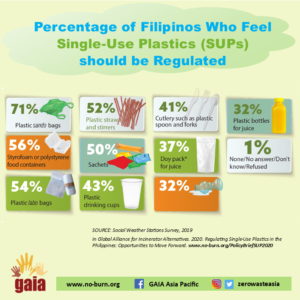 The nationwide survey showed that seven out of 10 Filipinos feel that the best thing to do with SUPs is to ban their use at all times.  Topping the list of materials that should be regulated or used less nationally is sando bags (71%), followed by plastic straws and stirrers (66%), plastic labo bags (65%), styrofoam or polystyrene food containers (64%), sachets (60%), Tetra pack or doy pack for juices (59%), plastic drinking cups (56%), cutlery such as plastic spoons and forks (54%), Plastic bottles for juice (49%), and Plastic bottles for water (41%).

In addition, 6 out of 10 said they are willing to buy their food condiments in recyclable or refillable containers instead of sachets while 4 out of 10 feel that companies should find alternative materials to plastic.

“The message to political leaders and business is clear: Filipinos reject single-use plastics. By supporting a ban on SUPs, the Filipino consumer is also sending a message to the plastic industry and manufacturers that plastic pollution and throwaway systems are no longer acceptable,” said Beau Baconguis, Break Free From Plastic (BFFP) Asia Pacific Coordinator. 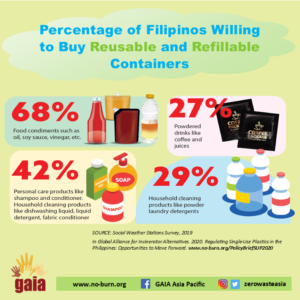 More than a hundred and twenty countries have already instituted regulatory measures such as bans, levies, charges, and others, aimed at reducing the production and consumption of SUPs. The most recent SUP regulations were by Bangladesh, Thailand, and China, the Indian state of Kerala and the Indonesian City of Jakarta.

Further, according to the same survey, 71% of Filipinos want to ban the use of plastic at all times while 10% feel there is a need to ask the user of plastic to pay higher.

“The results of the survey puts into question the common excuse from the  the big companies that sachets are pro-poor,” said Froilan Grate, GAIA Philippines Executive Director.  According to the survey, those who are willing to buy their food condiments in recyclables and refillables and those who feel that plastic must be regulated or be used less nationally is highest in Class E at 73%.  “Sachets and other SUPs are not pro-poor.  People buy in sachets because an alternative distribution or packaging systems are not being made available by multinational companies.” 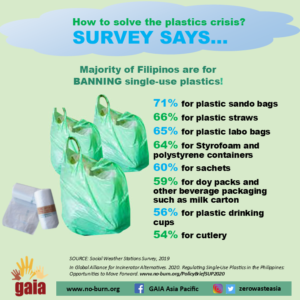 For Patricia Nicdao, Ecowaste Coalition Policy and Advocacy Officer, the Philippines urgently needs a law that will ban single-use plastics at the national level. “We have to act now. The people have spoken. The government needs to pass a  law banning single-use plastics. We cannot afford any more excuses and delays!”, Nicdao said.

During the press briefing, GAIA also released a policy brief titled “Regulating Single-use Plastics in the Philippines: Opportunities to Move Forward” which outlines recommendations for the Philippine government in tackling the plastic pollution crisis. Among key policy recommendations are the following:

– Pass a national ban on the production, sale, distribution, and use of sando and labo bags and other SUPs with phaseout schedule

– Phase out sachets in favor of reuse and refill systems for product distribution within three years.

– Establish a program that demands greater responsibility from 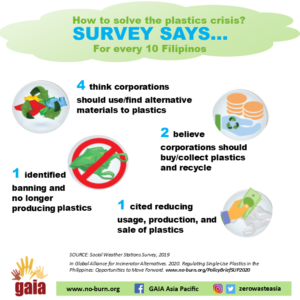 companies manufacturing and using plastic, by determining their obligations and targets, as well as offering incentives to reduce plastic.

Despite being hailed as one of the world’s most progressive laws on waste management, the implementation of the 19-year old law R.A. 90003 or the Ecological Solid Waste Management Act of 2001 has suffered from a lack of political will and contradicting policies from government agencies involved in waste and resource management.

“We hope that the Philippine government seriously take the public sentiment on single-use plastics. As shown in the results of the survey, plastic pollution is an important issue for Filipino consumers. They are willing to sacrifice convenience and are already looking into refill options and other alternative systems. They expect our government leaders to address the plastic pollution crisis and go beyond lip service by banning single-use plastics in the whole country, ” Grate said. //ends

Notes from the SWS survey: 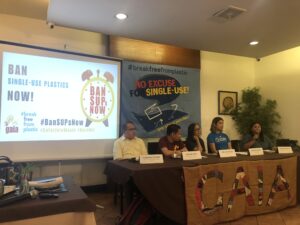 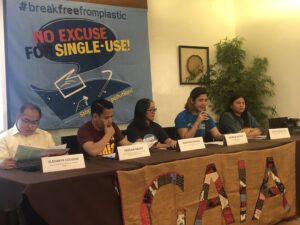 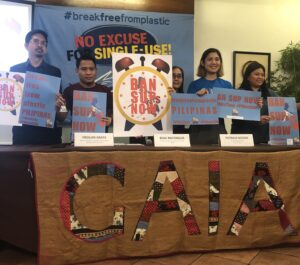 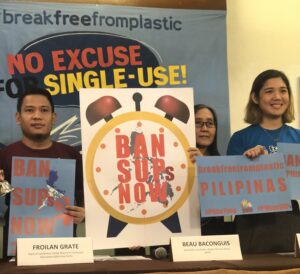 Single-use plastic is not pro-poor.  Contrary to the industry’s claim, a recent survey by SWS showed that 7 out of 10 poor Filipinos are willing to buy their food condiments–mantika, toyo, at suka–in recyclables and refillables.  According to the Global Alliance for Incinerator Alternatives (GAIA) Asia Pacific, who commissioned the survey, availability and not affordability is the reason why Filipinos keep buying in food in SUP.  Time is ticking.  Ban SUP now. 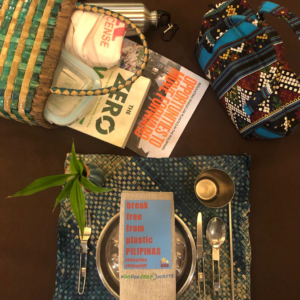