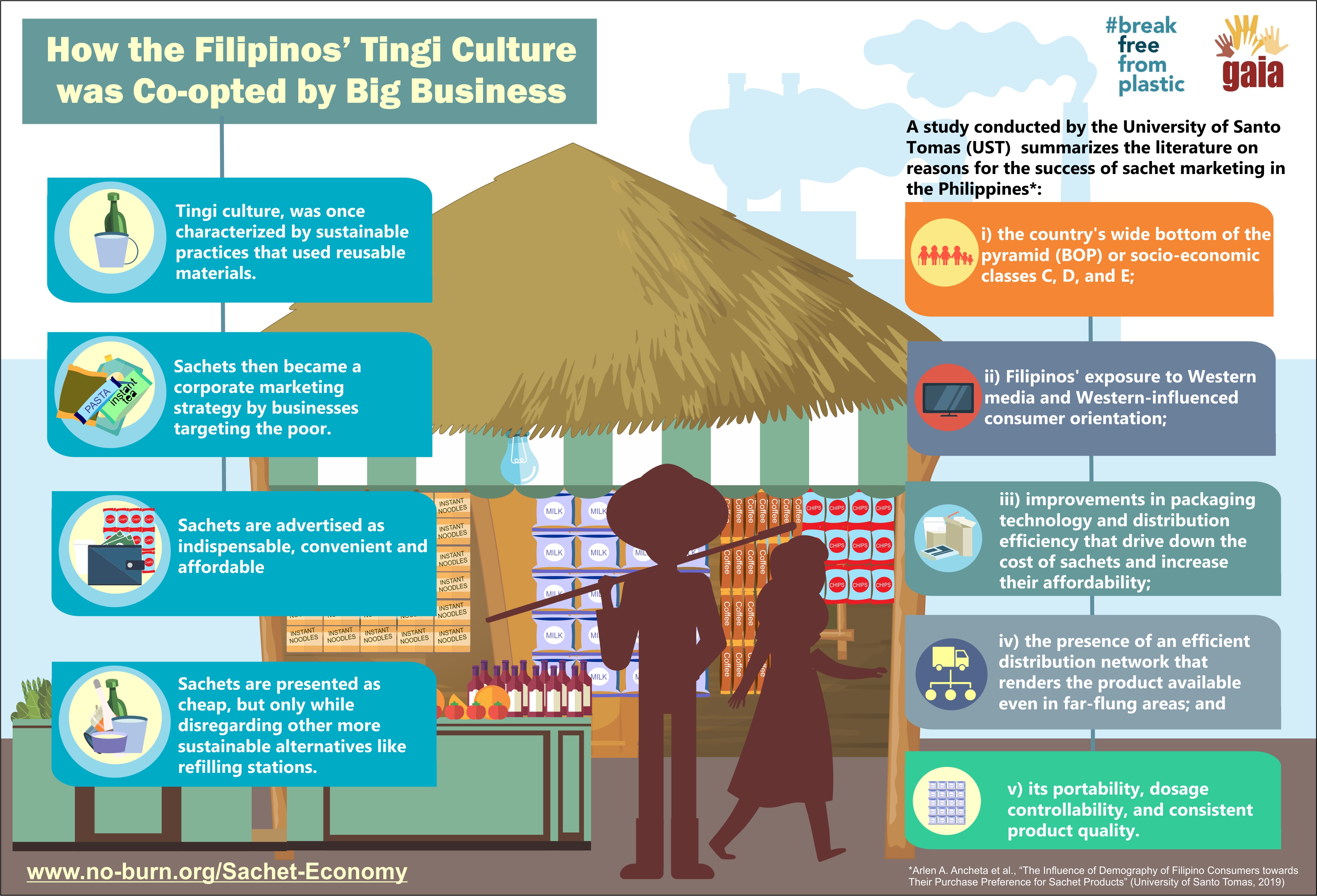 The report commissioned by GAIA uses data from University of Santo Tomas’ Research Center for Social Sciences and Education (RCSSEd) for their research on Filipinos’ sachet consumption habits.  According to the report, single-use plastics, specifically sachets, are a growing concern in the Philippines because of the affordability and  convenience they give to users. What is also striking is that while certain local governments have gone beyond the usual plastic bag bans by passing ordinances, the exclusion of sachets from local laws is alarming.

“Sachets are perceived as inexpensive, and convenient because of their small and durable packaging, but in reality, they are expensive for cities to manage, difficult to effectively recycle, and cannot be reused, ” quipped Miko Aliño, GAIA Asia Pacific program manager.

The findings in the report further show how corporations have managed to evade responsibility for sachet waste, which leaves local governments and communities struggling with this non-recyclable waste to address the imminent sachet pollution crisis.

“Corporations have greatly benefited from these products by marketing them for their low cost and convenience but they are not made accountable for the pollution that comes along with its production and disposal,” he said.

Moreover, the report says that  sachet purchase and use tend to be higher among lower socioeconomic brackets. This is because multinational companies advertised them as affordable for daily-wage earners for them to be able to purchase branded quality products in small quantities. It is based on the premise that sachets help consumers ration their use of a product better than big containers, thereby reducing product wasting.

“Sachets may have brought better quality products to poor communities but the problem is that they have become a waste nightmare. When sachets are discarded indiscriminately, these clog drains and contribute to flooding or even pollute our oceans. With this data, we can really see that companies are really the ones to be blamed. We can also use this report’s findings to pursue regulations that would compel companies to acknowledge their liability for plastic pollution” he added .

With the lack of an integrated national policy on sachet use, the report cited efforts of local government units and the need to step up to address a large part of the country’s plastic waste problem including production of throwaway plastic packaging and the actions that companies must do to reverse plastic-related problems and pollution.

“There is this crucial necessity to craft regulations that would include sachets in the big picture, and to demand accountability from the companies that manufacture them. The government and members of our communities need to clamor for extended producer responsibility (EPR) policies for corporations to become fully responsible for their products,” said Beau Baconguis, Asia Pacific coordinator of #breakfreefromplastic. 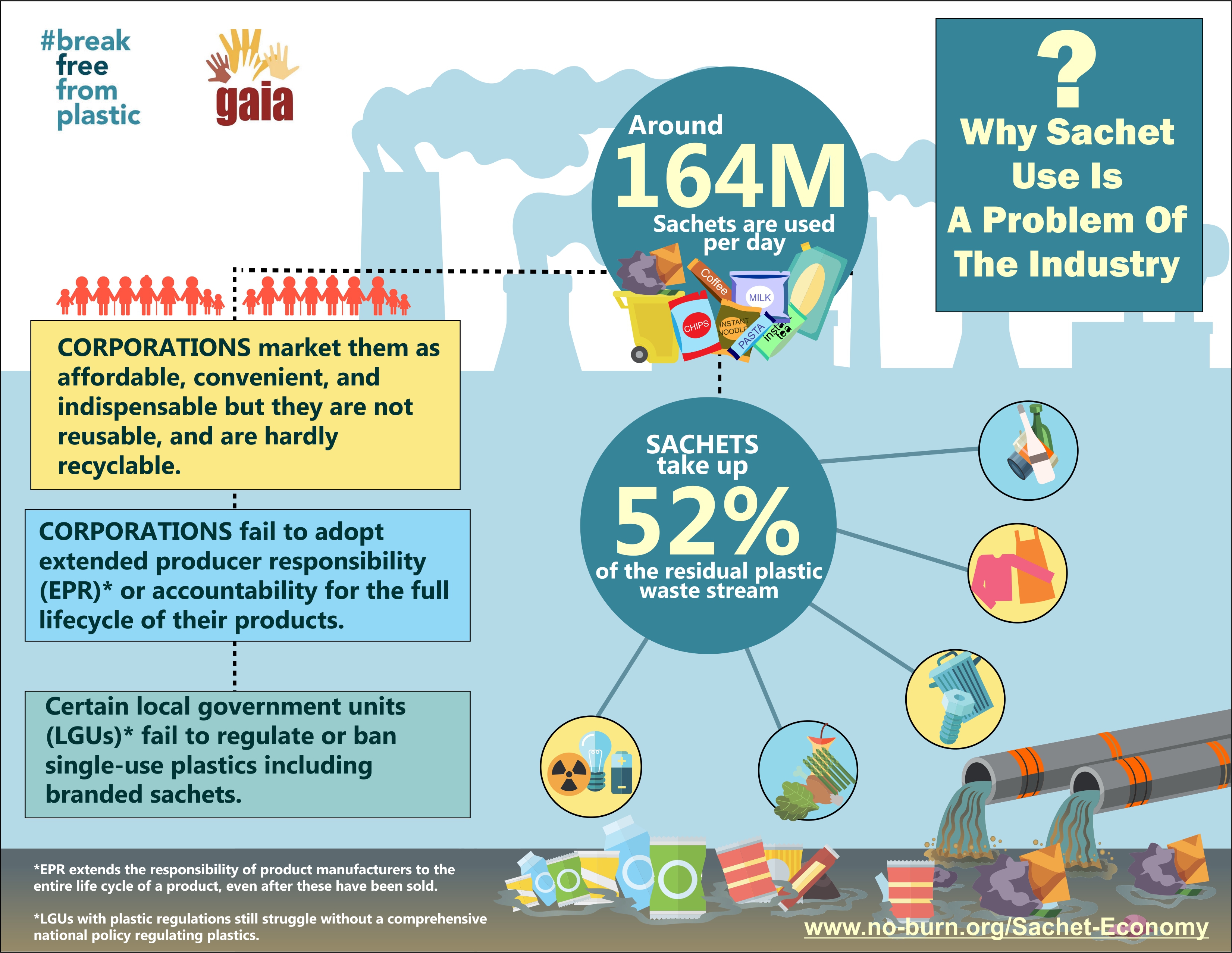 “EPR is just one solution which is a policy principle that extends the responsibility of product manufacturers to the entire life cycle of a product.  Even after these have been sold, EPR shifts back the obligation for the life cycle impacts of products to the manufacturers, including the managing of their waste,” she added.

The report also presents the attitude of Filipinos towards plastics such as how our culture is continuously redefined and assimilated in the tactics of big businesses in perpetuating decades of plastic pollution. Furthermore, the report discusses public attitudes towards plastic pollution and lays out several recommendations and initiatives from the environmental organizations, private sector, and social enterprises towards efforts to address the situation.

“Filipinos had done very well without sachets in the past. We bought cooking oil and condiments in small portions or tingi in our community sari-sari stores with our own reusable containers and mugs. Wet goods such as fish and meat were usually wrapped in used paper or banana leaves,” said Rei Panaligan, National Coordinator of Break Free From Plastic Philippines.

“With this, we want to encourage again our businesses and retailers to adopt alternative delivery systems by putting refilling stations and encouraging customers to bring their own reusable bags and containers. Moreover, this should be part of a better normal way forward in a post-COVID scenario wherein alternative delivery systems and refill stations are part of the plan. As shown by the latest statements of scientists worldwide, reusable is still safe to be used  during this pandemic, ” he added.

For more info, the report can be downloaded at: http://www.no-burn.org/Sachet-Economy

Statement of 120 experts and scientists assuring the safety of reusables during this  pandemic: https://www.breakfreefromplastic.org/2020/06/23/reusables-can-be-used-safely-over-115-health-experts-fire-back-at-the-plastic-industry/

About BFFP –  #breakfreefromplastic Movement is a global movement envisioning a future free from plastic pollution. Since its launch in 2016, more than 8,000 organizations and individual supporters from across the world have joined the movement to demand massive reductions in single-use plastics and to push for lasting solutions to the plastic pollution crisis.These organizations share the common values of environmental protection and social justice, which guide their work at the community level and represent a global, unified vision. www.breakfreefromplastic.org