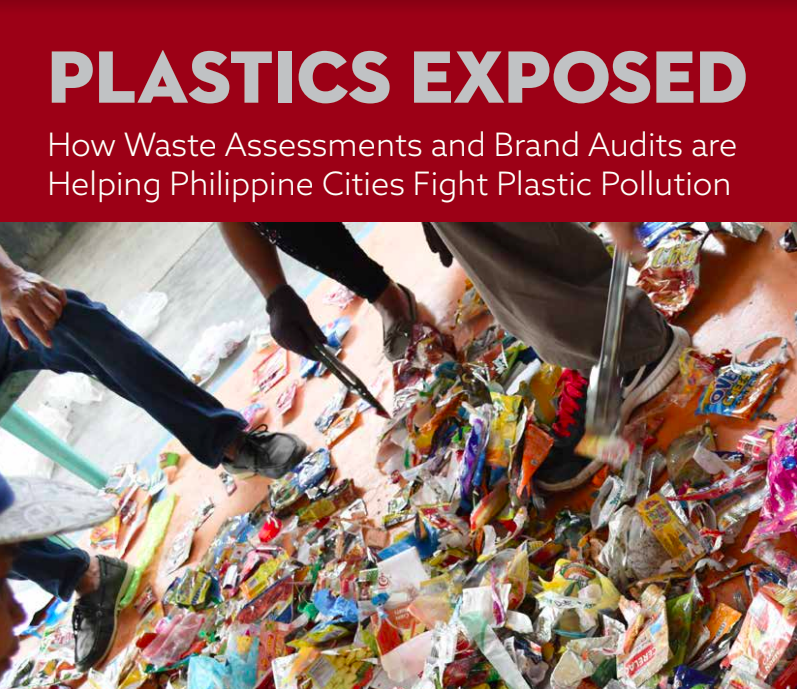 Manila, Philippines (March 7, 2019) —Filipinos use more than 163 million plastic sachet packets, 48 million shopping bags and 45 million thin film bags daily. These numbers were revealed in a new report released today by environmental organization Global Alliance for Incinerator Alternatives (GAIA). The group contends that single-use disposable plastic is the greatest obstacle to sound waste and resource management, and is calling on governments and manufacturers to regulate, and stop producing, single-use plastics.

The report, Plastics exposed: How waste assessments and brand audits are helping Philippine cities fight plastic pollution, uses data from household waste assessments and brand audits (WABA)[1] conducted by Mother Earth Foundation (MEF) in six cities and seven municipalities[2] across the country in the past five years. GAIA extrapolated the data to calculate daily and yearly plastic usage throughout the country in order to provide new quantitative evidence about plastic pollution in the Philippines. The report is being launched ahead of the UN Environment Assembly meeting next week, where plastic pollution will be discussed.

In my village, we do the best we can to manage waste effectively, but plastics remain a problem,” said Mercy Sumilang, of Barangay Talayan in Quezon City. “If all our basic necessities are wrapped in sachets or plastic, we are forced to become part of the problem. This needs to be solved.”

The findings in the report show how cities and municipalities around the Philippines are struggling against plastic residuals. Despite efforts on the part of many localities to institute Zero Waste programs, they still struggle with plastics which prevent them from achieving Zero Waste goals. With the projected increase in plastic production worldwide, including in the Philippines, national governments, as well as local government authorities need robust data and effective strategies to address the looming plastic pollution crisis.

“Cities and municipalities can fight back against plastic pollution using data from waste assessments and brand audits,” said Sonia Mendoza, chairman of Mother Earth Foundation. “Cities can strengthen regulations, improve waste management services, and reduce waste volume and corresponding management costs. They can also use the data to pursue plastic bans or regulations, and to compel companies to acknowledge their liability for plastic pollution.”

According to GAIA, the figures show that the sheer volume of plastic waste generated daily is beyond the capacity of barangays, cities and municipalities to manage, and that the only way to manage single-use plastic is to make less of it. “The problem is the huge amount of single-use plastics being produced—not just the way waste is managed,” said Froilan Grate, executive director of GAIA Asia-Pacific. “Plastic is a pollution problem, and it starts as soon as the plastic is made. Clean-up is left to cities and municipalities who use taxpayers’ money to deal with the waste. Companies create the waste in the form of plastic sachets, and profit from these, in the millions. They must be made accountable for the pollution.”

With the absence of a national policy on plastics, some local governments in the Philippines have instituted plastic bag regulations. However, branded plastics that include sachets and other primary packaging used by some of the world’s largest manufacturing companies are not covered by bans. GAIA states that if manufacturers were mandated at the national level to reduce production of throwaway plastic packaging, for example through innovations such as alternative delivery systems or reusable packaging, this would address a large part of the country’s plastic waste problem, including plastic waste leakage to rivers and seas.

“The Philippine case is merely a snapshot of what’s happening in other parts of the world,” said Von Hernandez, Global Coordinator of the #breakfreefromplastic movement. “This is a global crisis that needs global interventions. We need policies and strong regulations that would ban single use plastics and hold corporations accountable for their role in perpetuating decades of plastic pollution.”

The report lays out several recommendations for the Philippine government to effectively address plastic pollution, including: standardizing disaggregated data on plastic packaging in waste assessments, as well as including brand information; instituting comprehensive national plastic bag ban and the regulation of other single-use plastic products; mandating companies to redesign products, packaging and delivery systems; and strengthening the ban on waste incineration. GAIA is additionally calling on manufacturing corporations to be transparent about the plastic packaging they produce, assume accountability and liability for their packaging, and immediately stop producing throwaway plastic packaging. //

The report can be downloaded at: https://www.no-burn.org/waba2019

[1] Developed by Mother Earth Foundation, WABA is a tool used to obtain detailed information about the types, volume, and number of plastic waste in an area, in order to support strategies to help cities and municipalities deal effectively with solid waste.

*Filipinos discard 163 million plastic sachet packets daily. If each packet were 5cm x 6cm in size and 1mm in thickness, they can be arranged side by side and stacked 312 times (around 1 foot high), covering an area equivalent to the land area of Metro Manila.

About MEF – Mother Earth Foundation (MEF) is a non-profit organization actively engaged in addressing waste and toxic pollution, climate change, and other health, and environmental justice issues in the Philippines. It is best known for its advocacy of Zero Waste through the systematic reduction and proper waste management. www.motherearthphil.org

About BFFP –  #breakfreefromplastic is a global movement envisioning a future free from plastic pollution. Since its launch in September 2016, over 1,400 non-governmental organizations from across the world have joined the movement to demand massive reductions in single-use plastics and to push for lasting solutions to the plastic pollution crisis. These organizations share the common values of environmental protection and social justice, which guide their work at the community level and represent a global, unified vision. www.breakfreefromplastic.org.