From Silos to Solidarity

One of GAIA’s First International Coordinators, Annie Leonard, on the Founding of GAIA

It was December 2000 at the Alpha Conference center outside Johannesburg, South Africa, and Annie Leonard was nervous.

“We had spent months testing the idea, consulting with allies, learning more about what people needed to strengthen their fight against incinerators,” she recalled. “I really really wanted it to work, and there were so many different ideas of what it should do, people working in different contexts, different waste streams—I was hopeful and nervous at the same time. The world needs a strong GAIA and this was our chance.”

The activists had packed themselves into that conference room in Johannesburg with one purpose in mind: to launch a global network to end the reign of pollution from incinerators and find alternative solutions to waste. “We were shocked (and thrilled) at the response since way more people came than we expected and we were worried we would run out of money so we made everyone stay in really crowded rooms!” Annie reminisced.

But to understand how the tiny seed was planted that grew into the vast global network that GAIA is today, Annie took us back to one fateful trip in the mid-1990’s. At the time, Annie was a busy young activist working on toxic waste pollution issues for an organization called Essential Information, founded by Ralph Nader. An activist colleague from New Delhi named Madhumitta Dutta traveled to the US to meet environmental health and justice organizations to learn about different strategies for organizing against pollution. Madhu and Annie traveled around the U.S., meeting grassroots and advocacy groups—some of whom are now members of GAIA.

The trip was so successful that just a year later Madhu worked with Annie and other activists to organize another event that brought together anti-pollution activists from around the world to learn from one another’s successes. Together with Neil Tangri, and with the guidance of Ken Geiser, they organized a two-week training for activists from around the world at the Toxics Use Reduction Institute in Lowell, Massachusetts.  It became clear how important it was for activists in other regions to work in solidarity with one another towards common cause. And as it turned out, the common cause was fighting the incinerator industry. “Almost everyone wanted to go to a workgroup to discuss fighting incinerators. All of them were fighting incinerators in their home countries and wanted to learn and strategize about how to stop them.”

In describing her reasons for helping bring GAIA forth into the world, Annie wrote, “There is a moral and scientific imperative to stop these things that poison people and perpetuate our wasting culture. I had been a waste activist for over a decade at that point, traveling to many countries to investigate and organize against waste trafficking. I was alarmed at the proposals for incinerators that were popping up all over—from South Africa to India to everywhere…and the people in the communities didn’t know each other so it was easy for the incinerator pushers to lie about how their burners worked elsewhere. We saw the potential in building a broad, diverse, courageous coalition that could work together and support each other to fight these monstrosities, share information to better understand our opponent, undermine the financing and social license of these plants and end the age of incineration.” 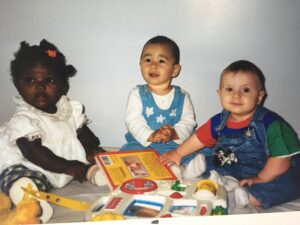 At the first GAIA meeting, the organizers wanted to create a family-friendly culture, and so Annie and other new mothers brought our babies, and childcare was provided. The baby in the middle is Annie’s daughter, Dewi.

While everyone agreed that fighting incinerators was a top-priority to their work on fighting toxic pollution, not everyone agreed on the best way to go about it. “I remember some people saying that we need to focus, laser focused, on stopping incinerators: We need a global anti-incinerator alliance,” Annie recalled. “Others said we also need to build out solutions and alternatives since the lack of credible alternatives undermined their anti-incinerator work; they said we need a global alliance for incinerator alternatives.” When it came time to choose a name for the newborn organization, people debated about what strategy the name should emphasize. One Nigerian woman doodled the word GAIA on her notepad, and the name stuck. “We looked down at her paper and realized that GAIA was a great name—which people could choose the meaning of depending on which focus of the work was best in their region. That way, we were united as one but could tailor the organization to local needs.”

Annie stated, “I also really liked the conversations about how to ensure GAIA operates according to the values we want to see in the world and builds structures and processes that embed equity in participation, which is why we originally had  a shared leadership model with co-coordinators from the global north and global south together.” These values of equity, justice, and community-based leadership have become the bedrock of GAIA since its founding. As Annie put it, “GAIA would never have survived if it didn’t embrace solidarity, with GAIA members helping each other across geographies and differences. I am impressed that GAIA sees waste as a systemic issue and knows that people power and organizing, rather than some fancy new techno fix, will help us win.”

As GAIA enters the next phase of its long life, members have their work cut out for them. “With China no longer taking our plastic waste, and the petrochemical build out happening in the Gulf, there is going to be increased pressure to burn the exploding volumes of plastic,” said Annie. “We have to band together to fight them on all fronts—fight them like our life depends on it.” But Annie is confident that the network will persevere, in no small part because of our relationships with one another. “I love the cross cultural friendships that have grown through GAIA, I  love all my GAIA brothers and sisters around the world!” said Annie, before adding: “Mostly, I love every extra nail we can put in the incinerator industry’s coffin.”