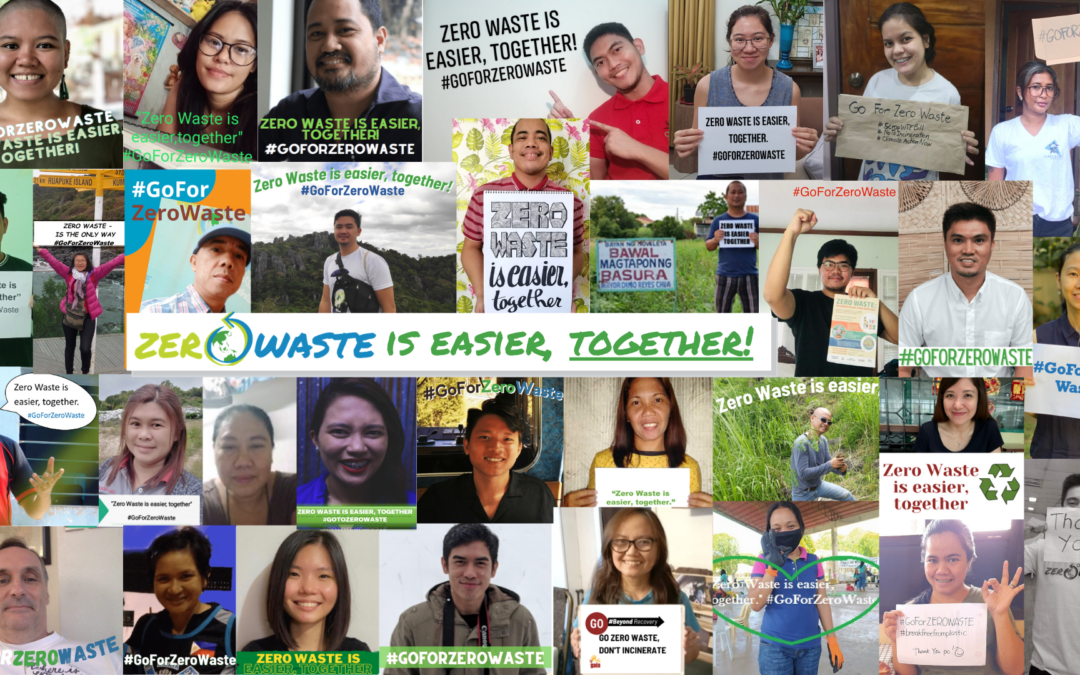 Thirty-six participants graduated from the first online version of the Zero Waste Academy (ZWA) implemented by GAIA Asia Pacific and Mother Earth Foundation (MEF) from January 18 to March 21, 2021. Of these graduates, three received funding for their Zero Waste projects in their chosen communities.

The traditional (pre-COVID-19) ZWA is an immersive two-week training designed to give participants the tools to implement a Zero Waste program in their respective cities and communities. It covers a mix of lectures, hands-on exercises, and writing sessions. 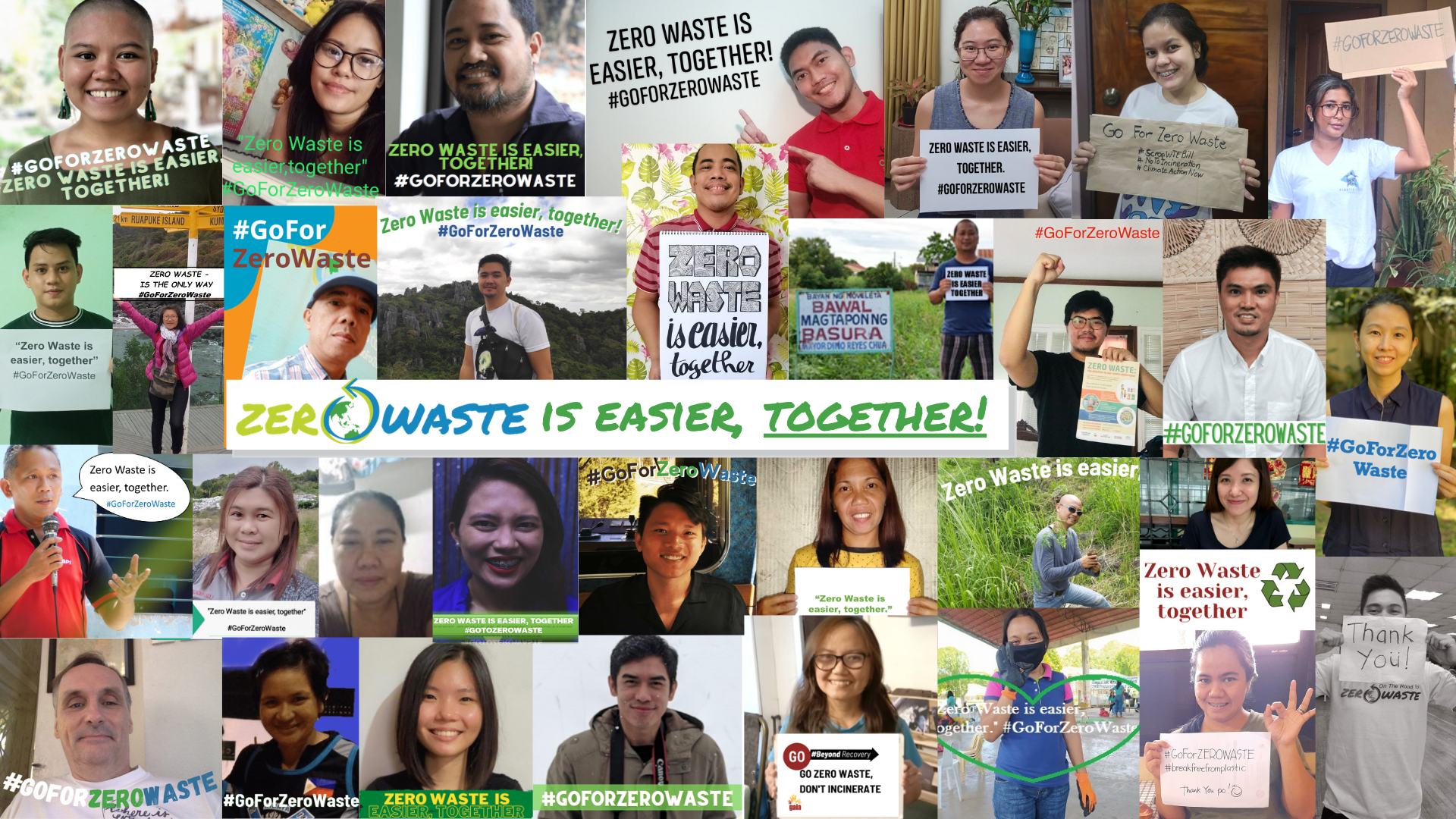 Because of the challenges and risks posed by the pandemic, GAIA and MEF translated the in-person workshop into a seven-week online course consisting of online learning modules and curated materials such as pre-recorded video lectures, virtual study tours, instructional texts, and case studies that provided participants with information on the basics of community-level Zero Waste implementation. Weekly live discussions were also organized where course instructors Froilan Grate of GAIA Asia Pacific and Sonia Mendoza, Maricon Alvarez, and Raphaello Villavicencio of Mother Earth Foundation shared their expertise and own experiences of doing the work on the ground.

An addition to this year’s ZWA is the ZWA Seed Fund or Project Seeding, an optional component where participants were challenged to submit Zero Waste-related project proposals. The top three proposals were to receive Php 75,000 each as startup capital to realize their projects. This opportunity aimed to build on the momentum from Zero Waste implementers and advocates alike to adopt Zero Waste in more locations around the country to kickstart a new wave of Zero Waste communities.

Of the 11 applicants who submitted their proposals for the Project Seeding, the top three who received a grant were:

The online feature of the academy appeared to have worked well in the end, as it reached people beyond the usual network of GAIA and MEF. Moreover, it allowed individuals who could not have participated had it been in-person to join.

“It’s Interesting that the ZWA was done online. It made it easier to take part in the Academy. I learned a lot about the challenges and also learned about the features of Zoom, said Vicky Bautista of Zero Waste Baguio, Inc.

Meanwhile, other participants quelled initial reservations about conducting an online academy because of concerns that since it will lack an important aspect of the in-person ZWA, which is allowing participants to have actual experiences on the ground, the learning might not be as rich. But if their comments are an indication, the participants of the online cohort did learn the meat of the lessons.

“One of the most striking moments that I had during this course was when I found out that implementing a Zero Waste program here in the Philippines is possible. As someone working in the local government, I know personally how challenging solid waste management can be, let alone implementing a full scale Zero Waste management program. But the cases in San Fernando, Pampanga and Tacloban City amazes me because I can imagine the time, effort, and passion that the teams behind them have exerted for the program implementation to be successful. This goes to show that if there’s a will, there’s a way,” said Jethro Alba, of the City Environment and Natural Resources Office of San Juan City,

Andrea Go of Philippine Center for Environmental Protection and Sustainable Development, Inc. added: “I’m really glad that I learned about the consequences of waste-to energy-facilities. I feel like if I didn’t attend this Academy, I may have gone in the direction of advocating for that kind of solution.

Some participants expressed excitement to go back to their community and implement Zero Waste, while others have already started including Zero Waste principles in their activities.  Vicky Baustista, a Senior Lecturer at  University of the Philippines Baguio shared: “I challenged the NSTP students to do the WABA in their own home as baseline and do a second WABA by the end of the semester and share their experience.”

For others like Catherine Liamzon, a researcher from Quezon City, the Zero Waste Academy made them reflect on realities that are often overlooked. “The WACS [Waste Assessment and Characterization SUrvey]  exercise made me think more deeply about the waste workers who serve our communities. It also made me more aware about the different kinds of waste, like special waste, hazardous waste … that may pose a threat to the lives of the health of our waste workers. I try to imagine just how difficult and dangerous it is to go through unsorted waste. I have the highest respect for our waste workers and I salute each and every one of them,” she said.

Felicia Dayrit is GAIA’s Zero Waste Cities Program Associate for the Asia-Pacific region. She graduated from the Development Studies Program of the Ateneo de Manila University in 2017. Right after graduating, she lived in Eastern Samar as a Jesuit Volunteer where she was assigned as a Community Enterprise Organizer. She returned to Quezon City in April 2018 and started working at GAIA in September 2018.

Visit academy.zerowaste.asia or contact zwa@no-burn.org to learn more about the Zero Waste Academy.