COP 25: A Failure to Face the Climate Emergency

2019 saw intensifying climate chaos and mobilization for decisive action. Days before COP25 was due to start in Madrid under Chile’s presidency, the UN Environment Programme announced that countries had to cut their global greenhouse gas emissions by 7.6% every year until 2030 to get on track for the 1.5°C goal of the Paris Agreement – cuts that are five times deeper than what countries have already committed to in their Nationally-Determined Contributions (NDCs). Despite these high stakes, and as 2019 drew to a close, COP25 ended in failure.

As countries gathered to negotiate the Paris Agreement rules, rich industrialized countries continued to deny compensation to countries already hard-hit by climate change, and attempted to escape their responsibility by negotiating additional loopholes, while no deal was found on long-term climate finance.

As countries gathered to negotiate the Paris Agreement rules, rich industrialized countries continued to deny compensation to countries already hard-hit by climate change, and attempted to escape their responsibility by negotiating additional loopholes, while no deal was found on long-term climate finance. The USA, which is due to exit the Paris Agreement next year, once more distinguished itself by focusing on shielding polluters from accountability and obstructing progress. Chile had promised a “Blue COP” but the recognition of the importance of ocean and coastal areas was limited to attempts to monetize “blue carbon” sequestered in marine ecosystems in lieu of truly protecting them.

If no progress was made, some damage was avoided with the lack of consensus on new rules for carbon markets (Article 6 of the Paris Agreement). In principle, carbon markets allow wealthy nations to buy emissions reductions from poorer countries to count toward their own targets. In practice, they are a shell game that allow countries to increase emissions while claiming to reduce them, all the while lining the pockets of financial services companies. The issue will come up again at COP26 in Glasgow next year.

On 6 December, half a million protesters took to the streets in Madrid, matched by a march in Santiago. Activists protested peacefully inside COP25 on several occasions, manifesting their dissatisfaction with the negotiations, which they repeated during the closing statements from indigenous peoples, women, NGOs and youth. 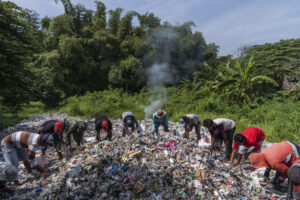 Plastic pollution is one of many symptoms of the intrinsic unsustainability of the fossil fuels and petrochemicals complex at the root of the climate emergency. Plastics harm the climate at every stage of their lifecycle, particularly when they are burnt as waste, releasing considerable carbon emissions. Meanwhile, staggering investments into plastics infrastructure are paving the way for a dramatic increase in production by 2050. Plastics could account for 20% of global oil consumption by then.

Yet, the plastics-climate connection was not addressed in COP negotiations. Emissions from the waste sector are poorly captured in most countries’ national climate plans (known as Nationally Determined Contributions or NDCs). Nevertheless, the dangerously-high carbon emissions from plastic waste incineration in its diverse forms (including pyrolysis, gasification, “plastic-to-fuel”) are well documented.

Plastics also remained a peripheral issue in official side events in Madrid, meagre progress from previous COPs where the issue was absent altogether. Some expert speakers acknowledged the climate impacts of plastic and other waste incineration, while others stressed the importance of plastics reduction and reuse within a circular economy. Meanwhile, corporate spokespeople for major plastic pollution offenders including Coca-Cola continued to hide their responsibility for growing volumes of single-use plastics in our economies behind overstated recyclability claims and false solutions such as bio-based plastics.

In contrast, at the Social Summit (Cumbre Social) in Madrid, which ran in parallel to COP25, discussions and exhibits tackled the plastics-climate nexus from a variety of angles, including climate implications of its exponential production and the role of plastics reduction, deposit-return systems and zero waste systems and the impact of plastic waste incineration on the livelihoods of waste-pickers and informal recyclers. 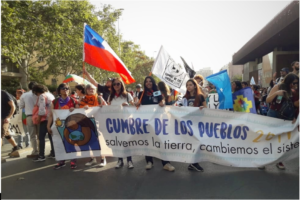 While COP25 was moved to Madrid, Spain after unprecedented popular protests erupted in Chile that met with violent repression and other human rights violations by the Chilean authorities, activists and civil society organizations took part in a Peoples’ Summit (Cumbre de los Pueblos) in Santiago from 2 to 7 December. Over 1500 participants shared experiences and to strengthen global solidarity and local action through over 40 town halls, panel discussions and workshops across three spaces including the People’s Summit itself, the Women’s Tent and the Peace Village. GAIA took part and organized activities with representatives from its member organizations, including informal recyclers, from Argentina, Ecuador, Chile, Brazil, Colombia and Mexico.

The Peoples’ Summit’s final declaration emphasized the rights of nature and of all living beings that sustain the Earth, exposed waste incineration as a false solution, and highlighted the importance of zero waste systems at the community level.