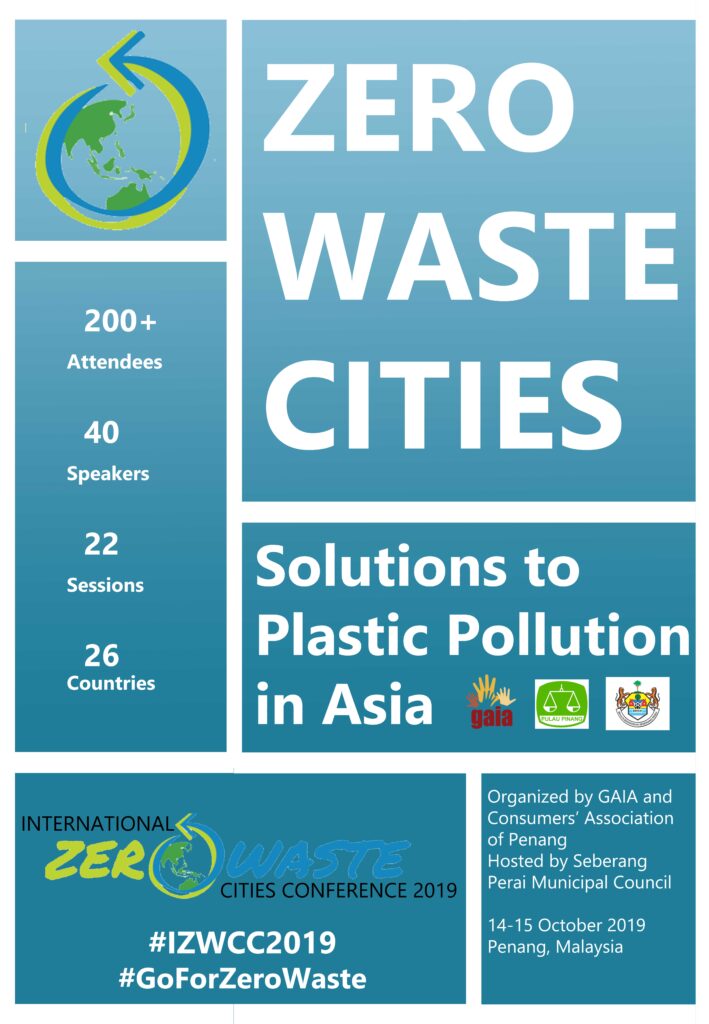 Penang, Malaysia  (13 October 2019) — Hundreds of local government officials and non-government organizations (NGOs) in Asia met in a two-day international conference in Penang, Malaysia to showcase solutions and discuss policies that will help bring an end to plastic pollution — and usher in sustainable, Zero Waste Cities in the region.

The conference organized by GAIA Asia Pacific and the Consumers’ Association of Penang (CAP) in collaboration with Seberang Perai City Council gathered local government leaders to talk about Zero Waste solutions that are currently spearheaded by local chief executives and communities. The event also served as a platform for city officials and groups to learn from best practices and experiences of implementation.

Environmental groups contend that waste should not be addressed through harmful end-of-pipe technologies like “waste-to-energy” incinerators, but through Zero Waste systems. Zero Waste approaches address waste and resources throughout their entire lifecycle —from production to end of life — with the goal of waste prevention and resource conservation. 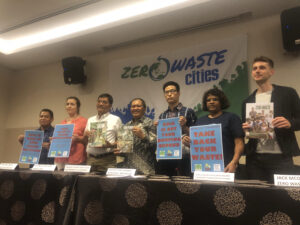 In a press conference held a day before the conference, Froilan Grate, Regional Coordinator of GAIA Asia Pacific, emphasized the value of Zero Waste. “Cities and communities have a role in addressing the plastic pollution crisis. By implementing Zero Waste programs, we are able to prevent the leakage of waste, particularly problematic plastics, into the environment. Our experiences in our Zero Waste communities show that through at-source segregation, decentralized collection, and management of organics, we are able to reduce the volume of waste that cities need to address. Most importantly, we are able to identify problematic products and packaging that are beyond the capacity of our communities to manage.”

The proliferation of single-use plastic is one of the biggest drivers of plastic pollution and the biggest stumbling block to achieving Zero Waste. Tools like Waste Assessments and Brand Audits (WABA) identifies these problematic products.

“In recent years, we have seen how sachets have been inundating markets in Asia. Contrary to claims that they are pro-poor, they are actually anti-poor as they externalize the burden of managing them to cities and communities, instead of the companies who profit from them. Long before single-use plastics (SUPs) were introduced into the market, better solutions like refill systems have already been working well in many Asian communities,” added Grate.

For her part, Mageswari Sangaralingam of CAP said: “Asia has been wrongly portrayed as the poster child for plastic pollution. The actual fact is that we have become the world’s dumping ground, arising from countries exporting their plastic problems. Many countries have started taking action to protect their borders from foreign plastic pollution. A lot of communities in Asia are already going Zero Waste. The solutions are in our hands and already happening in Penang and other localities in Asia.”

Monica Wilson of GAIA US believes that, “With every crisis comes an opportunity. The good news is that cities and citizens all over the world are recognizing that recycling is not the panacea to the plastic pollution problem and are taking bold and visionary action to prevent plastic pollution before it starts through sound Zero Waste and waste reduction policy.”

Several local governments in Asia are pioneering Zero Waste programs through cost-effective investments in decentralized waste collection, composting, recycling markets, and waste management infrastructure. Experiences of these Asian cities have shown that as long as the right strategies are in place, cities can set up Zero Waste systems that will enable successful implementation within a period of one year, while also achieving significant savings in waste management costs.

Jack McQuibban of Zero Waste Europe emphasized that there are many reasons to be hopeful with the initiatives from individuals, NGOs, and government and inter-government regulations that have moved the Zero Waste system forward.

“In recent years, we have seen a huge rise in the number of cities and communities taking a stand against the rise of waste and pollution. In Europe, nearly 400 municipalities have now committed to becoming zero waste. Based on citizen-centered models, local-level zero waste policies can lead to a substantial decrease in waste generation and increase in separate collection and recycling. What we are seeing today is that Zero Waste Cities are increasingly becoming hubs and catalysts for innovation, creating new and sustainable business models where waste is not generated in the first place.”

However, cities continue to struggle in managing non-recyclable waste, mostly single-use plastics such as sachets and other packaging. The City of San Fernando in Pampanga in the Philippines, for example, is implementing strict and effective plastic bag ban, but challenges remain.

San Fernando City, Pampanga Mayor Edwin Santiago, shared: “With strong political will and stakeholder engagement, our city has realized the benefits of Zero Waste, like reduced waste generation, a cleaner environment and savings for the city. But we’re not stopping here, we also have policies like our plastic bag bans that will further reduce our residual waste. But we need to do more.”

GAIA maintains that businesses need to be part of the solution of reducing plastic waste by not producing single-use packaging items and packaging in the first place. National government leaders must also realize they have a crucial role to play by enabling strong policy environment; for example, through mandating extended producer responsibility (EPR) policies, and a national ban on single-use plastics.

Organized ahead of the World Cities Day Celebration (October 31), the fourth edition of the International Zero Waste Cities Conference looked into local and national policy actions aimed at reducing single-use plastic, from material substitution by producers to outright bans in cities. Speakers from different countries also talked about success stories of Zero Waste initiatives from the European Union and other parts of the globe.

The Global Alliance for Incinerator Alternatives (GAIA) is a global network of more than 800 grassroots groups, NGOs and individuals. We envision a just, zero waste world built on respect for ecological limits and community rights, where people are free from the burden of toxic pollution, and resources are sustainably conserved, not burned or dumped. We work to catalyze a global shift towards ecological and environmental justice by strengthening grassroots social movements that advance solutions to waste and pollution. www.no-burn.org