Two weeks after its launch, the Zero Waste Academy, a project of the Mother Earth Foundation (MEF) and the Global Alliance for Incinerator Alternatives (GAIA), has produced its first batch of graduates.

The first batch of Zero Waste Academy graduates pose with the staff of Mother Earth Foundation and Global Alliance for Incinerator Alternatives. Photo by Froilan Grate.

The participants, composed of NGO and government representatives from Malaysia, Indonesia, India, and the Philippines, went through a two-week intensive workshop on implementing community Zero Waste program using the MEF methodology, or the 10 Steps to Establishing a Community Zero Waste Program developed by MEF. 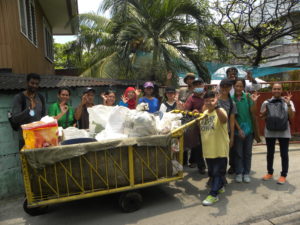 One group of participants pose with the trash they collected during their door-to-door waste collection. They were at step 7 of the process: “Dry-Run and Evaluation of Systems.”

Held from May 30 to June 13, 2017, the ZW workshop is rich with hands-on activities and interactions with communities, complemented with orientation before and deliberations after each activity, discussions on relevant issues such as waste-to-energy technologies and healthcare waste, and a skill-share on organic waste management technologies. The skill share was courtesy of practitioners and experts among the participants.

“We cannot tell you what exactly will happen once you go to the communities because what you will be experiencing there will be the real thing,” Froilan Grate, MEF President and GAIA Asia Pacific Regional Coordinator, told the participants before they embarked on their first community work. Grate added that immersing the participants in the MEF Zero Waste methodology was not for them to copy it completely, but to allow them to see how things work in the Philippines and adopt what are suitable to their own contexts, and to make their own modifications as they see fit. 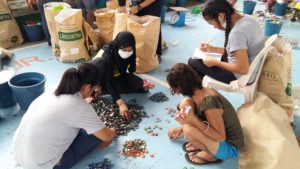 “We do not expect you to copy how we do it in the Philippines,” he told the participants. “Your contexts will be different, and we cannot claim to be experts in implementing Zero Waste in your own countries. You are the experts in your own communities,” he added. Fictor Ferdinand, Deputy Executive Director of YPBB, an NGO based in Bandung, Indonesia, shared that taking part in the workshop was an immense help for him and his fellow Indonesians.

The Indonesian delegates are currently implementing Zero Waste activities in their respective communities. “Implementing an area-wide zero waste system has been a challenge in Indonesia,” Ferdinand said, adding that they have previously trained people and educated them on segregation, but were unsuccessful in making the people comply. 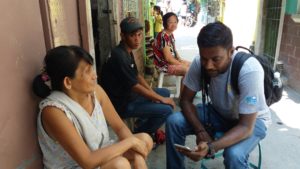 What language barrier?
Malaysian delegate, Theeban Gunasekaran doing the survey using the local language. The survey questions are both in English and Filipino/Tagalog.

“We believe that waste management should be decentralized down to the barangay (village, or kelurahan in Indonesia) level. But kelurahans do not have power like the barangays have here in the Philippines. Kelurahans cannot create ordinances. So, seeing how Zero Waste program is done in the Philippines is important. We have learned many things that we can try. Still, we also did not come here thinking that once we graduate, we will already be experts in implementing Zero Waste strategies. We still have a lot of questions, and we will still be doing a lot of modifications. It will be a continuous learning process for us,” he added.

Other delegates, although already experts in their own fields, expressed still having learned a lot from the workshop. “I came here not having full knowledge of what exactly I am going to learn. It is my first time to go house to house, and I learned the correct way of understanding the segregation of waste. I learned about waste segregation from books, but the severity of the problem, you won’t be able to understand from the book. I only realized after going house to house how difficult it is to [convince] people to segregate their own waste. [I saw] their reluctance, their indifference to their own waste,” Suseela Nagappan of the Consumers Association of Penang (Malaysia), shared. 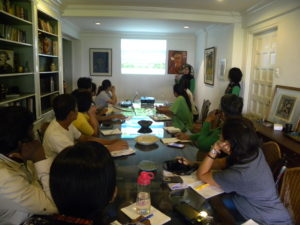 Sharing of Expertise. Tini Martini Tapran of Yayasan GSSI, Indonesia , shares with the group a unique organics waste management technology that they are using in Bandung, Indonesia, the biopori.

Like Suseela Nagappan, the other delegates underscored the hands-on nature of the workshop and the sharing of skills and expertise among the participants as among the things that make the workshop different.

“The workshop was satisfying because it’s different, it’s hands-on. I learned a lot from the program and from my fellow participants,” remarked Cresencia Caberia of the Guian Development Foundation, Inc. “I learned that without a system, merely having trash bins is useless,” she added.

Merci Ferrer, former Executive Director of Health Care Without Harm and one of the founders of War on Waste Dumaguete (WOW D), took note of the great camaraderie and willingness of the participants in sharing their expertise. “There was overflowing expertise and caring and love among the participants,” she said, adding that when they begin implementing Zero Waste Program in Dumaguete (Philippines), she will consult and update her classmates.

“The issue of waste requires all stakeholders to work together, and so we thought of sharing how we do it. Hence, the Zero Waste Academy. But while we endeavored to share our knowledge and expertise, we also learned a lot from the participants,” said Sonia Mendoza, Chairman of Mother Earth Foundation. 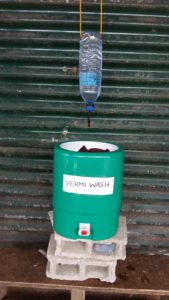 A demonstration setup of the vermi-wash, an organic waste management technique, put up by the participants at the Fort Bonifacio materials recovery facility.

“It is during activities such as this that new ideas come to us,” added Suseela Nagappan: “Thank you for giving us the chance to think of new ideas that we can try when we get back to our country.”

The first batch of Zero Waste Academy graduates are: