Texas Campaign for the Environment

A Texas Free From Pollution

Texas Campaign for the Environment (TCE) has been organizing around its vision for a “Texas free from pollution” since 1991. In its early years, TCE helped get recycling and household waste in major Texas cities. In 2001, TCE helped close a grandfather loophole in the Texas Clean Air Act, which exempted all existing air polluters when the law was passed in 1971. In the 2000s, TCE helped pass state-level legislation that required producers to take back TVs and computers after identifying electronics laden with toxic metals as one of the fastest growing waste streams in the country.

TCE’s door-to-door canvassing program is the “main political muscle” behind its campaigns, sending its teams out five days a week to speak to residents and collect tens of thousands of letters to public officials and corporations. Within the last few years alone, TCE generated over 20,000 letters to legislators and the state’s environmental agency about toxic pollutants at waste sites. This strategy of consistent door-to-door outreach makes TCE a powerful ally to communities in local fights against polluting facilities and for zero waste policies. TCE has worked alongside residents in the city of Austin (the first Texas city to adopt a zero waste plan!) to implement universal access to curbside composting services; helped communities slow down landfill expansions; and is assisting in strengthening and implementing Dallas’ zero waste plan. 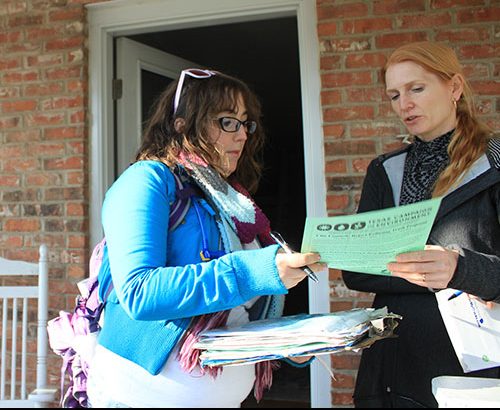 Over 28.7 million people live in Texas. The state is also home to some of the biggest extractive and polluting industries in the world. “It’s been historically difficult to wrangle with the narratives that surround oil and gas here while maintaining that we need to move away from that into a cleaner future… We relied on fossil fuels to get ourselves to a modern economy and get the things we have today” says TCE’s Dallas-Fort Worth Program Director Corey Troiani. He believes that “cognitive change, behavioral change, and attitude change” are necessary to convince many Texans living in the “beating heart of of the fossil fuel industry” that there is a “better and brighter future” in a transition towards a regenerative economy. Environmental advocates like TCE are also up against what Troiani calls the “Goliath” of deep-pocketed interests surrounding fossil fuel industries. “It’s going to be a long haul fight for us here”.

This year, TCE helped oppose a bill that would have reduced oversight and accountability measures over the state’s environmental agency’s permitting processes. It’s also fought state legislation that now makes protesting fossil fuel infrastructure a felony punishable by jail time and thousands of dollars in fines. TCE is also engaged in a statewide campaign to improve the standards and cleanup program around toxic waste and industrial sites, and to require greater producer responsibility. “When we were working on plastic bag ordinances, we would bring up over and over that small towns in rural Texas had plastic bag bans and fees, and these were super conservative towns” Troiani describes. “They weren’t doing it for traditional ‘environmental’ or ‘green’ reasons, but because they were ending on fences, or suck in cotton bales messing up cotton products, or cows were eating them.” Troiani believes that although conservative areas with deep oil and gas ties like Texas tend to get written off, working to overcome challenges to environmental action in Texas has important broader implications: “It’s really helpful whenever you can say that Texas cities are doing good for the environment… it sends a message to other places that this is possible for them too. When more conservative areas are making these decisions, it makes these things more replicable and attractive to other areas”

*Photos courtesy of Texas Campaign for the Environment