The Covid-19 pandemic has greatly affected Hoi An City where GreenViet has been implementing the “Building and Sharing Zero Waste Models in Selected Asian Communities” project under USAID’s Municipal Waste Recycling Program (MWRP). IEC  (Information, Education and Communication) activities have been postponed until the end of 2020. In addition to the pandemic, flooding and heavy rains have hit Hoi An and other parts of Central Vietnam, forcing project implementers to rethink activities and continue preparations virtually.

IEC and consultation activities resumed in December 2020, receiving strong support from all stakeholders. These activities have reached nearly 1,000 people in the nine villages of the two communes of Hoi An City.

Among these activities are:

With strong participation from the communities, the Hoi An Government, represented by the People’s Committees, in collaboration with the Quang Nam’s Tourism Association, has set a goal for Hoi An City to become a Green Destination by 2025.  It has been agreed upon by 40 businesses during the planning workshop last December 12th 2020 to focus on Zero Waste solutions to contribute to the goal.

During the International Zero Waste Cities Conference 2021 (IZWCC 2021), Nguyen Minh Ly, Vice Chairman of Hoi An’s People’s Committee,  shared this statement in support of a Zero Waste Hoi An: “One of Hoi An’s priorities in the next period is to build a green, clean city with a special attention on reducing waste. This is an important direction that we are committed to.” He also confirmed that, “We wish to have support and collaboration to help Hoi An city in achieving the goals to [become] a Zero Waste city. We wish to learn from and share experience with other Zero Waste cities to contribute to a Zero Waste planet.” This is considered a very good sign that the project’s efforts in “Building and Sharing Zero Waste Models” in Hoi An city has been successful and has persuaded its government and communities to be the 1st Zero Waste city in Vietnam. 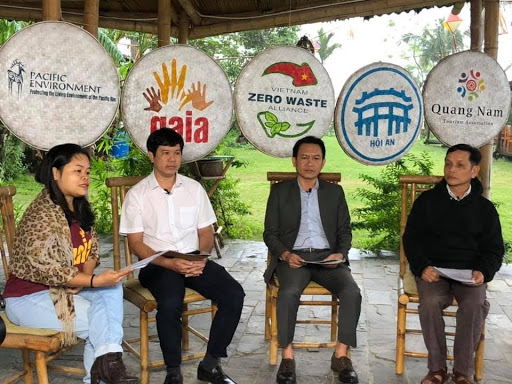 Representatives of Hoi An government shared their messages in the virtual dialogue in IZWCC 2021. Photo courtesy of GreenViet.

GAIA is grateful for the contributions from GreenViet. This feature is made possible through the Zero Waste Cities project  an initiative coordinated by GAIA Asia Pacific and funded by the Plastic Solutions Fund (PSF) and USAID. The views expressed in this feature do not necessarily reflect that of its funders.