On World Environment Day, green groups in Asia call for corporations to clean up their mess

New Delhi, India (June 4, 2018) — On the eve of World Environment Day, environmental organizations from India, the Philippines, and Indonesia called on multinational corporations to take responsibility for the pollution caused by their products, particularly in Asia. Waste and brand audits conducted in the three countries show multinational corporations to be the top sources of pollution, particularly of single-use plastics. 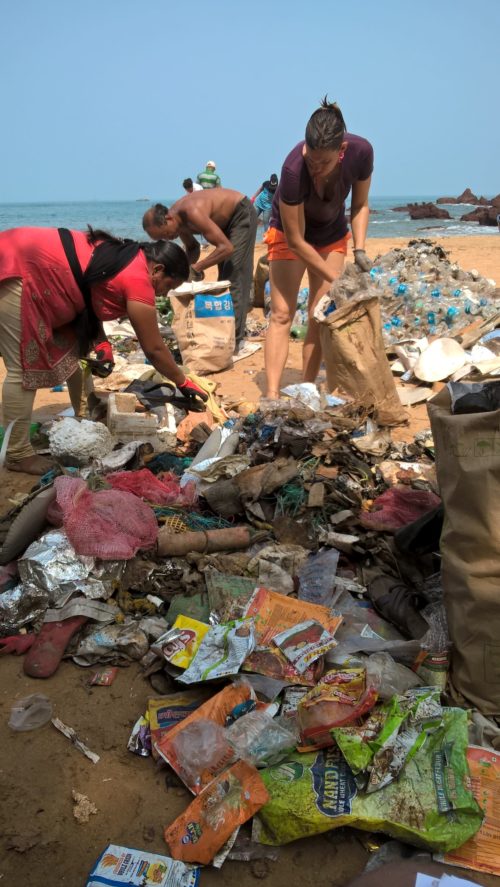 From May 16 to 26, ten GAIA member organizations and partners conducted clean-up and waste and brand audits in 18 states in India. Photo courtesy of V Recycle, Goa.

The results of these audits are remarkably similar to audits done in Indonesia and the Philippines, which showed that multilayered plastics accounted for nearly half of branded plastics audited.  Across the three countries, a total of 72,721 pieces of branded plastic waste were picked and analyzed, close to 75% of which was food packaging. The rest was household and personal care packaging.

After the 21-day brand audit in India, PepsiCo was found to be the top multinational polluter. Perfetti van Melle and Unilever came in as second and third, respectively. Other multinational corporations in the top 10 list are Coca-Cola, Mondelez, Nestle, Procter & Gamble, McDonald’s, and Ferrero SpA. Among Indian companies, Amul, Britannia, ITC, Parle, and Haldiram are  in the top 10 list. In audits conducted in multiple cities in the Philippines and Indonesia, Unilever, Procter and Gamble, Nestle, PT Torabika, Colgate-Palmolive, and Coca-Cola are among the top 10 multinational polluters.

“For far too long, multinational companies have been making billions of dollars from selling products that come in single-use low-value plastic packaging with no regard to how the resulting waste is managed,” said Von Hernandez, Global Coordinator of the #breakfreefromplastic movement. “The corporations responsible for the proliferation of these single-use, zero-value, and non-recyclable plastics need to own up to the massive pollution associated with their brands and products. They must clean up their act and start investing in alternative packaging materials and delivery systems that are ecologically sustainable for the people and the planet,” he added.

While clean-ups tend to be a feel-good activity that help raise awareness about plastic pollution, they fail to stop plastic pollution or identify and hold accountable those responsible for pollution. “We’re sick and tired of being blamed and of cleaning up the mess produced by corporations. By identifying who’s behind the waste that’s polluting our countries and demanding change, we aim to make clean-ups a thing of the past,” said Pratibha Sharma, GAIA’s India Coordinator. 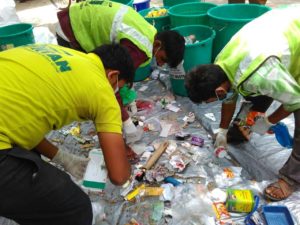 Waste and brand audit in Delhi. Photo courtesy of Chintan.

Many of the multinational brands identified to be most responsible for plastic pollution through clean-up and audit activities have announced commitments to make their packaging more recyclable. However, recycling alone is not enough to staunch the steady flow of new plastic. Since the 1950s, only 9% of plastic ever made has been recycled, while plastic production is slated to increase by 40% in the next decade.

The plastic recycling trade has allowed countries in the global north to export these problem plastics to poorer countries unequipped to deal with this plastic tsunami, where most end up in landfills or the surrounding environment. “In addition to dealing with huge volumes of disposable plastics, we have to fight unsustainable incineration technologies that are being peddled to us as solutions,” said David Sutasurya, Executive Director of Yayasan Pengembangan Biosains dan Bioteknologi (YPBB).

“We can’t recycle our way out of this problem. Much of the plastic packaging currently on the market contains toxic additives that put recycling workers’ and waste pickers’ health at risk. The only way forward is for major consumer-facing corporations to stop producing single-use products and packaging that are used for seconds and then lead to pollution forever,” Sharma added.

In stark contrast to corporations’ inadequacy in addressing the plastic pollution problem, communities across Asia are demonstrating Zero Waste solutions that can be adopted by cities and regions throughout the world. In San Fernando, Pampanga, Philippines, 95% of waste is diverted from landfill through broad community participation, recycling, and composting programs. In Pune, India, a women’s waste-picker collective of over 3,000 recycled 50,000 tons of waste from 600,000 households in 2016. These Zero Waste systems are rooted in social justice and environmental protection.

As corporations continue to show their disregard for public health and the environment by refusing to take accountability for the pollution they cause, communities across Asia are working together to implement solutions that not only reduce pollution, but also develop systems that create jobs, protect public health, the environment, and the climate. They demand that governments and corporates heed the evidence, and step up to their roles, too.