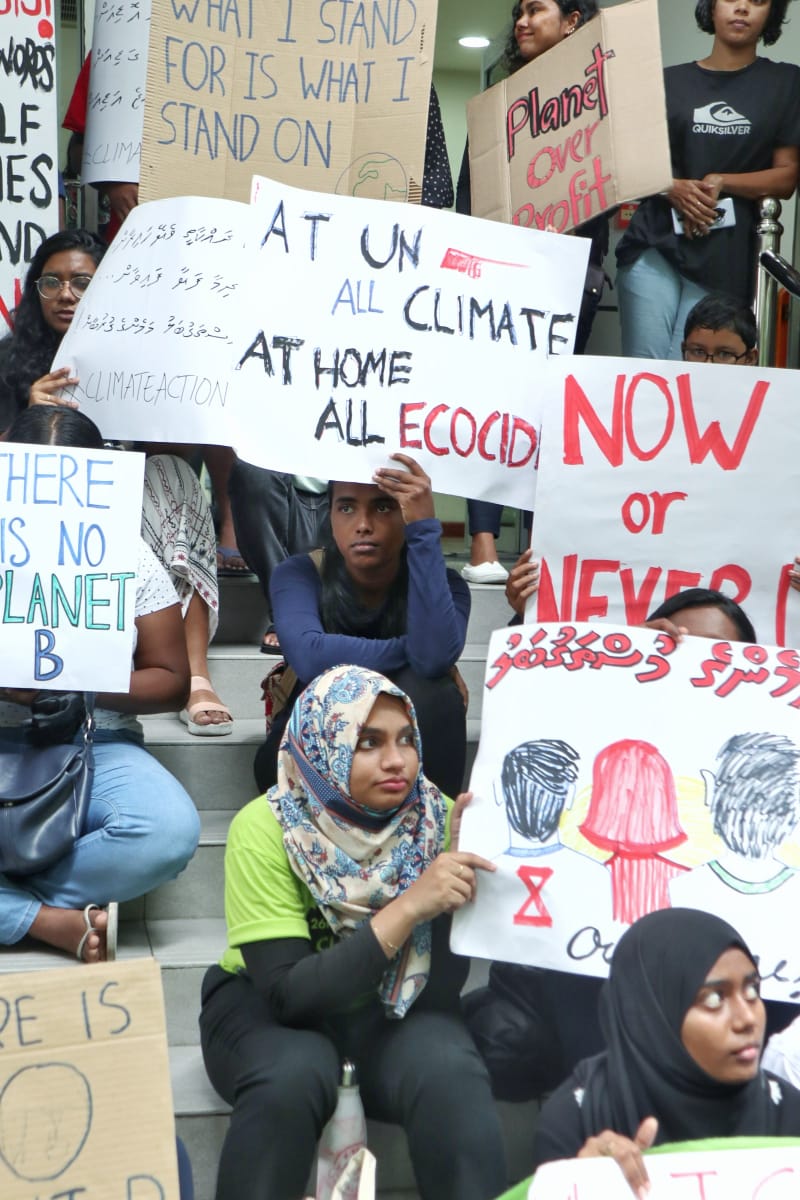 The vision started when as a kid, he wanted to plant trees and study Environmental Science to help save the environment. “As I grew a bit older, I realized that the impacts from those are not the same as what you can do with policy actions,” and so years later, with his wife Maryam Hamsha Hussain, Ahmed Afrah Ismail co-founded the Zero Waste Maldives that introduces local solutions and making these changes sustainable through participating in policy development for environmental reforms.

After graduating from the university with a degree in Mechanical Engineering, Afrah worked at the waste pollution section of the Environmental Protection Agency (EPA) in Maldives. During that time, he saw what the government was not doing and what they should be doing. “As a regulatory office, EPA was simply following the take-make-waste system and there was no work being done around circular economy. So I started reaching out and working on Extended Producer Responsibility (EPR), but funding was an issue at that time,” said Afrah. So together with his colleagues, they participated in a competition funded by the United Nations Development Programme (UNDP) and piloted a container deposit scheme as part of an EPR scheme. “It was successful, and the new government has incorporated EPR into their Strategic Action Plan as well as the Single-Use Plastic Phaseout Plans.”

He stayed a few more months in EPA, co-founded Zero Waste Maldives, and is now working for a different government agency while staying true to his vision for the environment. Looking back, Afrah shared that he first heard of GAIA when he was tasked in EPA to attend stakeholder meetings on incinerators and he did his research and “then I came across the GAIA publication, Questions to Ask When Evaluating a “Waste-to-Energy” Incinerator Project or Proposal.  After reading it, it did not make sense anymore not to do the right thing.”

GAIA sat down with Afrah to talk about Zero Waste Maldives, their beginnings, their work, and the vision.

Zero Waste Maldives started in 2018 but we registered in 2019. The mechanism of operating an NGO is a bit difficult in Maldives. Most NGOs die because of lack of funding. We did not want that to happen, so we started a social entrepreneurship model by selling Zero Waste alternatives that were not available here. Now, these alternatives (menstrual cups, cloth diapers) are sold in other stores in Maldives because we along with other like-minded partners championed them.

With the goal of promoting a Zero Waste Low Impact Lifestyle and enable individuals, businesses, communities, and government to send nothing to the oceans, landfills, or incinerators, ZWM now has 15 to 20 contributors who are specialists in economics, communications, and engineering, working on different projects on a volunteer basis.

With almost 200 inhabited islands, what we want is to develop a waste management system that will work on different settings.

We have also worked on other projects funded by the UNDP, Canada Fund for Local Initiatives (CFLI) , and United Nations Population Fund (UNFPA).

First, we want Maldives  to get on the Circular Economy track. The country is very much a linear economy. We want to realign the government towards CE.

Second,  eliminating single-use plastics (SUPs) should be a priority as much as possible. We have managed to get the ball rolling on this. The Maldives now has a phaseout plan in place and there are import and production bans coming into place. By June 1, there will be a single-use plastic importation ban.  We work closely with the government’s environment ministry and the President’s office who are spearheading SUPs and EPR policies. 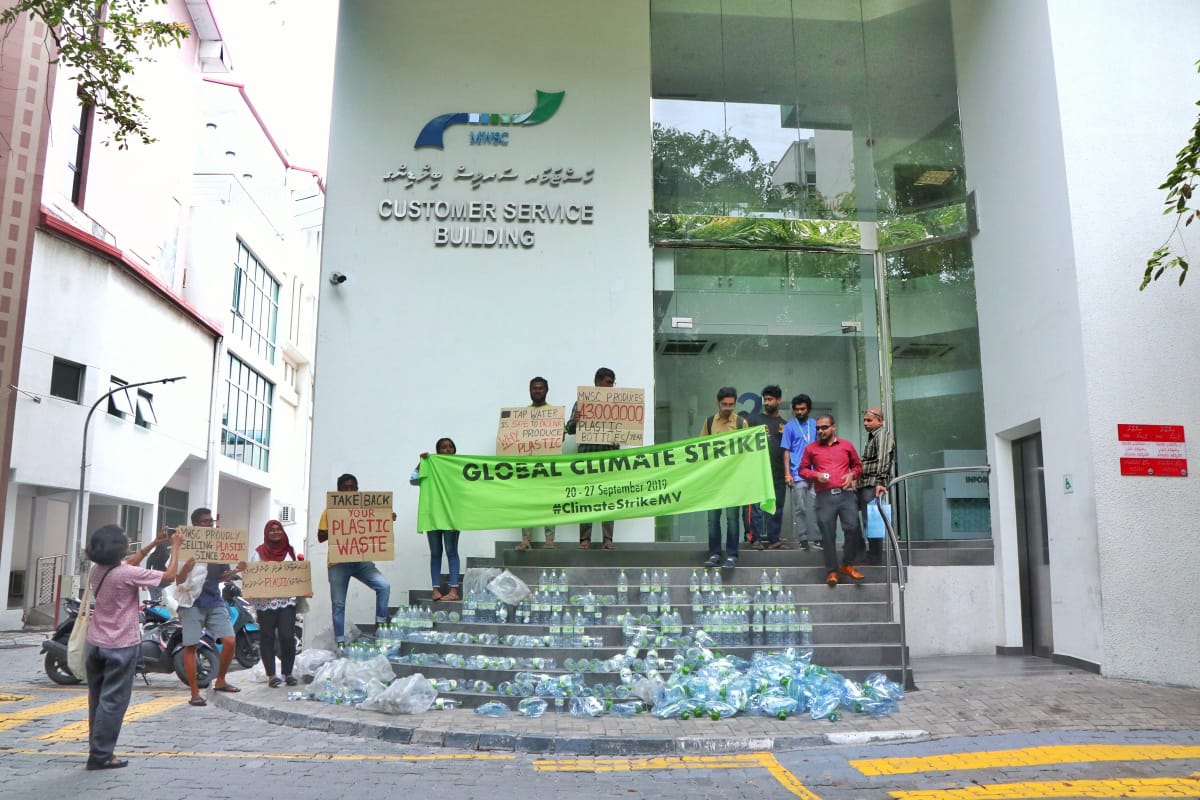 Third is creating wealth opportunities through a waste wealth entrepreneurial ecosystem. We want to champion upcycling of fabric waste, promote reuse, and try to see if there is something else that we can do before we recycle an item. We cannot rely on recycling in Maldives, as we do not have any formal recycling infrastructure so we have to take other steps first before recycling.

What are your main ongoing campaigns?

We have a program with UNFPA to promote sustainable menstrual products and increase awareness on menstrual hygiene. So, we introduce people to available alternatives, we conduct webinar sessions, and distribute menstrual cups and cloth pads. 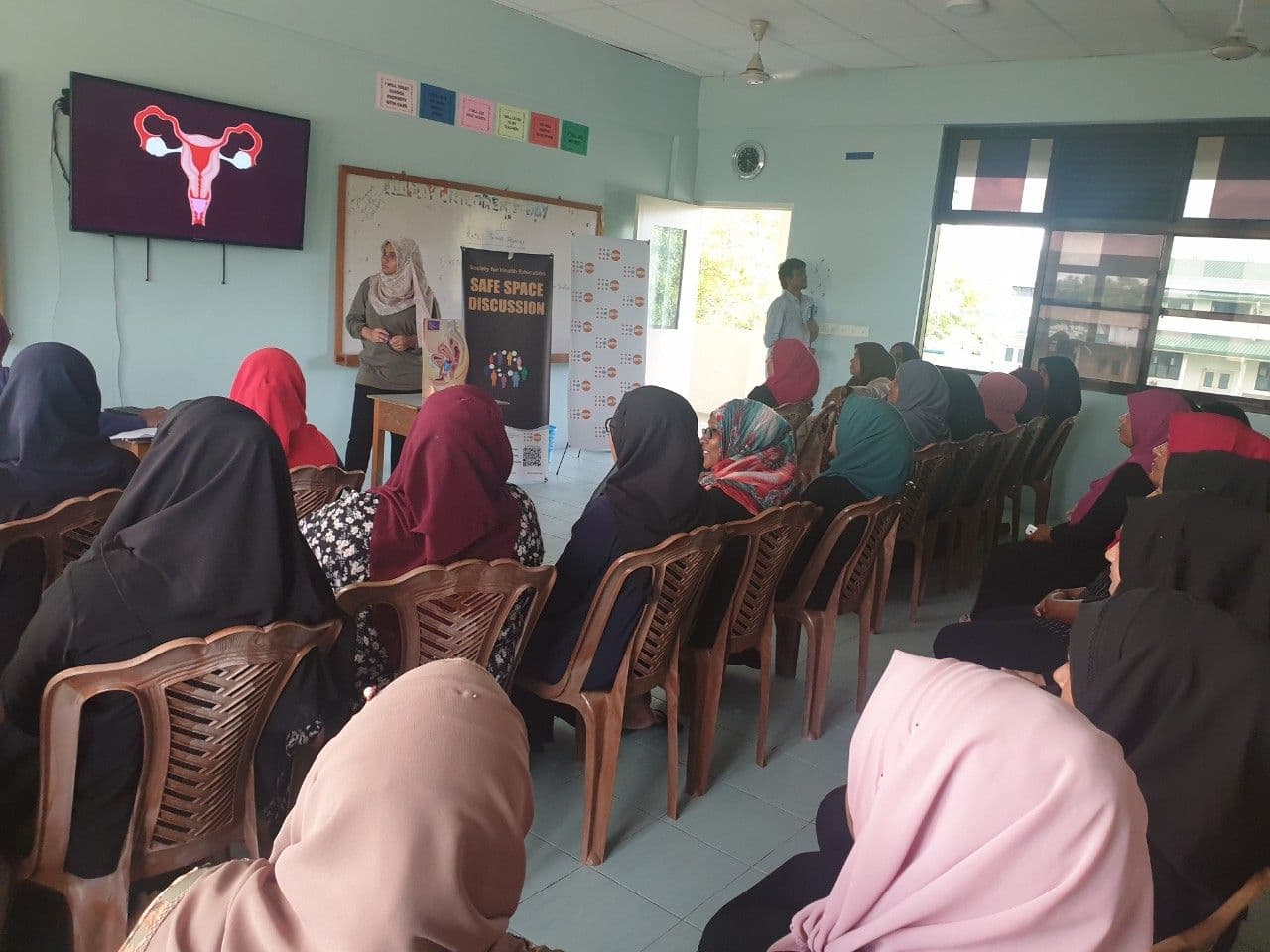 We are also active on the anti-incineration campaign. There are plans to build a 500-ton capacity Waste-to-Energy incinerator very close to the capital city of Male’ in Thilafushi. This project is funded by the Asian Development Bank (ADB) and a replication of a failed incinerator project funded by the World Bank. The failed project was supposed to manage 40 tons of waste but is still not operational. The paperwork for the project began in 2008 and implementation was supposed to happen in 2015 but until now the Environment Ministry is trying to cover up and whitewash its failure.

The failed incineration project in R.Vandhoo was a bad project even from the initial concept stage. There was no real plan and it was haphazardly put together and executed. If proper data was collected and independent studies carried out by experts that were also not proliferators of incineration projects; I believe we would not have gone ahead with this project. Yet, ADB is replicating this WTE project.

The ADB incinerator project has been approved where they are going to design, operate, and transfer to the government. There was no national legal mechanism framework to monitor the project risks and the Environment Ministry used that to their advantage. Lack of regulations is obviously more favorable to incinerator operators as regulations add more operational costs. 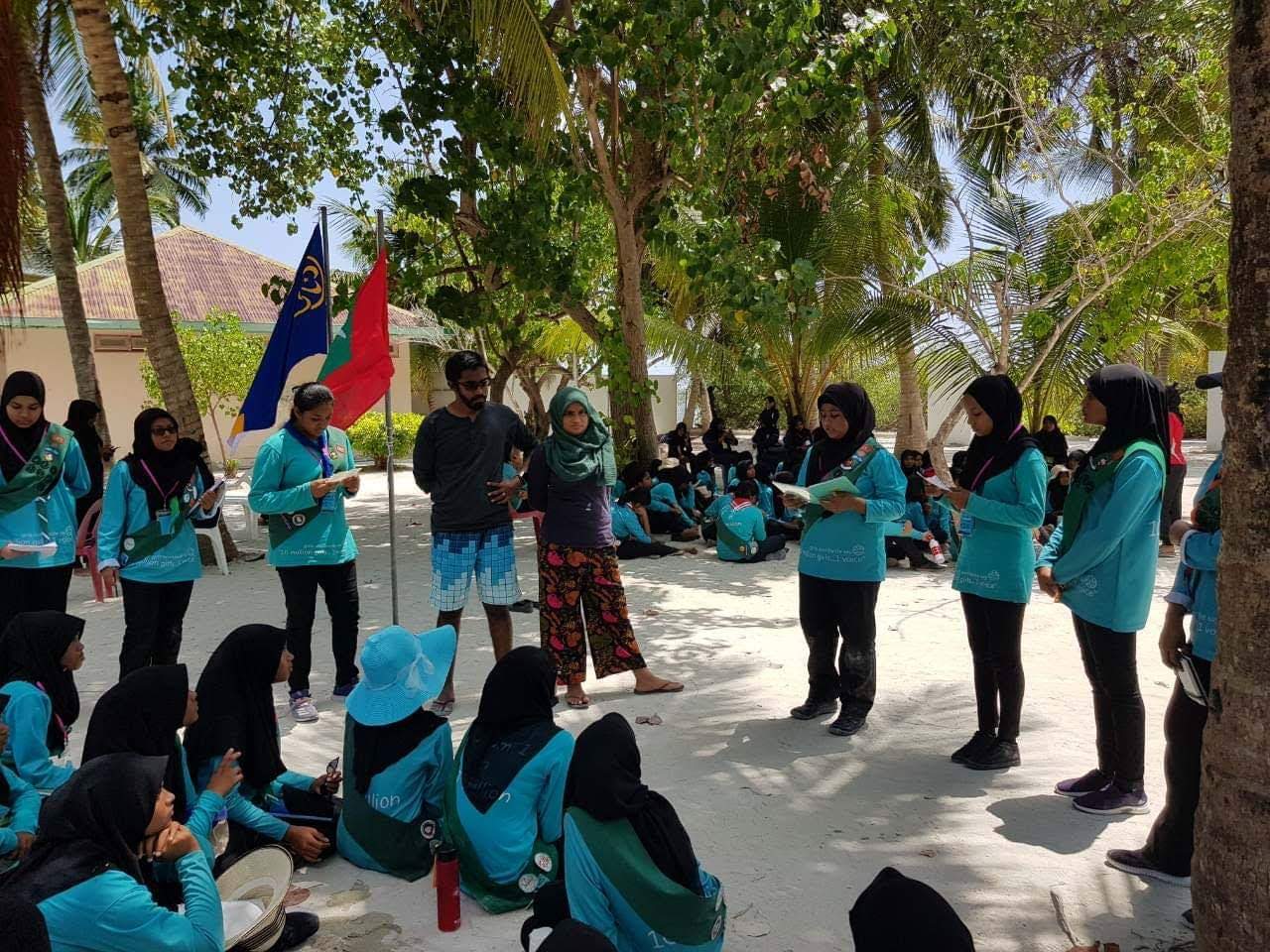 Apart from that, we are also working on reducing SUPs and waste via presentations and webinars that are catered to the public. A lot of people are open to SUPs bans and regulations but when we give them the idea of Zero Waste, it becomes difficult for them to comprehend. But there are of course niche markets and people are slowly embracing the concept.

Another new project is the Fenveshi funded by the CFLI. The project aims to help everyone in Male to stop drinking from plastic bottled water and start drinking in the city’s tap water in their homes and via public water fountains. We encourage the building of water fountains while educating the people and building trust in the municipal water supply systems.

Another ongoing project is the FehiFathi, dhivehi words which translates to Green Stitch. Under this project, we reduce the amount of fabric that ends up in landfill by rescuing clothes that can be used secondhand and upcycling clothes into other reusable items. This project is focused on empowering women and works exclusively with local seamstress and other women’s development committees within the islands.

What is Zero Waste Maldives’ biggest accomplishment or achievement?

The work we are starting with Adelphi (Germany) to create the EPR Mechanism for Maldives. If that is implemented, that will be our biggest accomplishment.

We played a big role in consulting and commenting on the SUPs policy and we have been continuously talking and putting pressure to the government and telling them the things that they can and should do.

The President’s office has been pushing for SUPs ban for some time now and they are very keen on it that the President himself announced in the UN General Assembly that Maldives is phasing out SUPs by 2023. That is the push that the other agencies needed to follow suit.

What challenges are you currently facing and how was the work impacted by the COVID crisis?

COVID-19 slowed things down for us, but it has also opened a lot of opportunities because people are more open to discussions and meetings around the waste management issues. If you manage your time well, you can have more meetings but of course that is also limited by the internet capacity of other countries.

Apart from the pandemic, another challenge we have is having to deal with old fashioned people who have an old-fashioned way of thinking, those who are not as open to innovation. I would say we need the older people to listen to the younger people, or perhaps even better, have the younger people lead.

What are the main environmental issues that your country/region is facing?

Waste mismanagement is the biggest environmental issue that we have and that is very much interlinked with health and social issues. With open burning, comes air pollution, and poor health for the people.

In Maldives, we still do a lot of land reclamation which impacts the coral reefs such as the ADB WTE incinerator project. The government keeps pushing for mega projects which are not impacting the people in a good way. We reclaim lands to build houses which the people cannot afford, and it does not solve anything nor does it make sense.  I’d say our biggest challenge is bad politics.

How do you see Zero Waste Maldives’ work evolving in the next years? 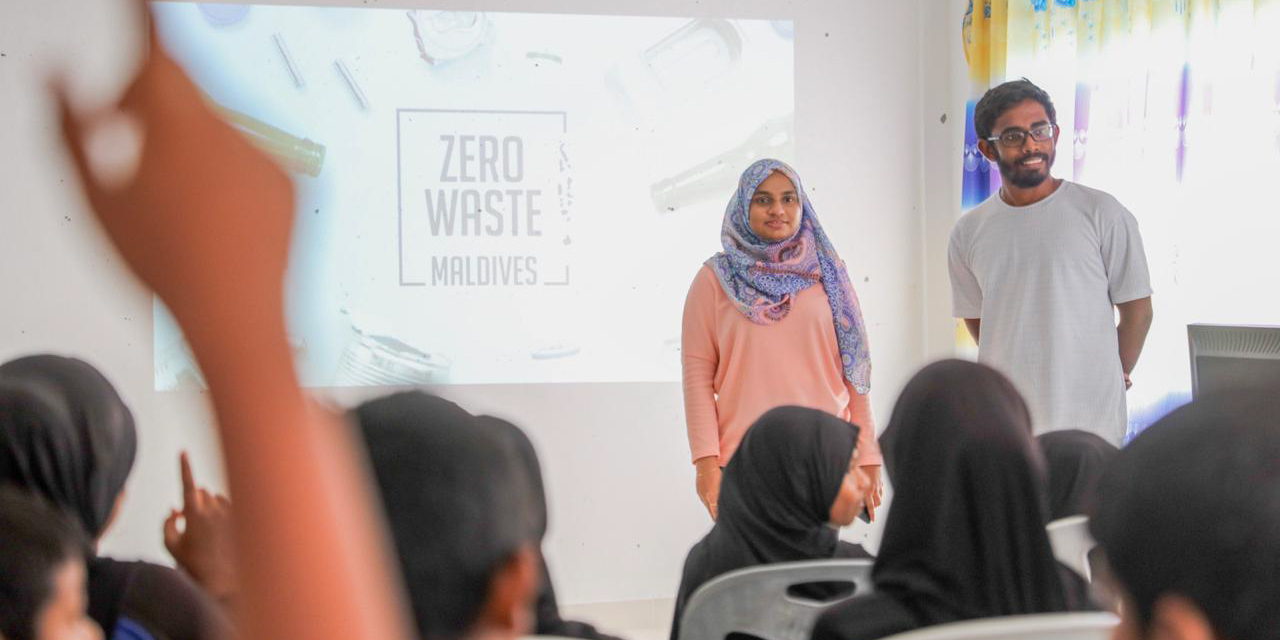 We would like to position ourselves as the leading NGO that drives a sustainablewaste policy in Maldives.

What are your thoughts on the waste crisis that many countries in your region and in the world are living in right now?

In some countries, the waste crisis can be addressed if there is a strong push from the people. Government always talks about individual action but if you look closely, it is the government who is not doing its job such as reducing waste top down and then they shift the blame to the people.

The waste crisis is not a segregated problem. It is not just my problem, or the government’s problem, it is our problem, and we need to see the big picture and work towards our goal of solving it. Even the big corporations who have been tagged as the biggest plastics polluters will have to be willing to change.

Do you collaborate with partners in other regions?

Yes, there is GAIA, Wildlife and Nature Protection Society in Sri Lanka, several NGOs in UK, Adelphi in Germany and Common Seas.

The work on menstrual hygiene aims to help alleviate period poverty. We also try to provide alternatives to SUPs at the most affordable prices. We also advocate for environmental sustainability in all government development projects.