The EcoWaste Coalition: A Formidable Coalition of Environment and Social Justice Advocates 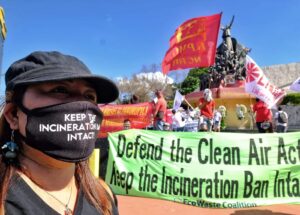 Discussing environment groups in the Philippines would not be complete without putting the spotlight on the EcoWaste Coalition. Always the face of environmental activism in the country, any venture of the coalition – with their placards, creative action, and no compromise stand –  is sure to land a page in newspapers and/or a segment in the evening news. However, what most people are not aware of is that the EcoWaste Coalition is more than a group of intense environmentalists.

A brief history of EWC

Formed over two decades ago, the organization has grown from a small assembly to a strong coalition of 150 organizations working on Zero Waste solutions and chemical control.

Aileen Lucero, the coalition’s National Director, has been with the group since the early 2000s. She shares that her role as the coalition’s lead is quite taxing but otherwise very fulfilling.

Recounting the Coalition’s history, she shares, “The EcoWaste Coalition began as an assembly campaigning for the urgent adoption of the Clean Air Bill, and was brought together in 1999 by Greenpeace and the Action Center of Catholic Bishops Conference of the Philippines (CBCP). Then,  we were known as the Clean Air Coalition.”

With the passing of the bill into law, the assembly, fueled by its initial success, moved to become The EcoWaste Coalition. This time, switching the team’s focus to solid waste management.

For one afternoon, despite her busy schedule, we sat down and talked to Aileen about the EcoWaste Coalition: its work, goals, and the implications of being one of the most vocal and visible environment advocacy groups in the Philippines. 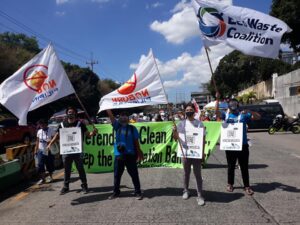 Balancing the different priorities and advocacies of 150 organizations is challenging but through a regular General Assembly that is held every two years, we align various objectives into one goal. In 2018, we presented a new vision and a new mission – and that is working towards Zero Waste in communities.

Our goals are to promote meaningful laws and to stop regressive policies. As a coalition, we also highlight our members’ work and best practices particularly in the areas of ecological agriculture, Zero Waste, and chemical safety. 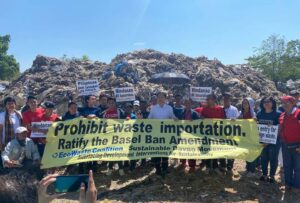 The EWC’s biggest accomplishments and achievements

We have a lot of campaigns and success stories but what we are most proud of is being instrumental in the passage of the Clean Air Act and successfully adding a section that bans incineration. We are also proud of taking the lead in sending wastes back to source countries. The downside to these achievements is that it makes us readily identifiable to the industries we are standing up against. Come to think of it, maybe it is fair to say that the threats we receive are also an achievement because it means that we’re a formidable devil’s advocate when it comes to these pressing issues.

Challenges EWC is facing. Changes brought about by COVID-19

Being at the forefront of exposés and investigations, we’re always at the receiving end of threats and lawsuits from big companies and landfill owners. But we don’t back down.  We play their game. If they harass us, we inform members and send out news releases so that these entities are put under the spotlight by the media in relation to the former’s attempts at intimidation.

The COVID-19 pandemic has also increased the difficulty faced by members who work directly with communities. This was further compounded by a lack of access or unfamiliarity with technology by some of our members. When the first lockdown was lifted, members still had to practice proper social distancing and other safety measures when they conducted brand audits and went to communities to help set up equipment so members from these far-flung communities can attend webinars In places where there is really a lack of technology, we used flipcharts and organized community gatherings in town meeting halls. 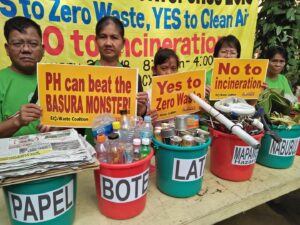 Main environment issues faced by the Philippines and Southeast Asia

While there have been improvements in the last 2 decades, the Philippines primarily lacks the political will to enforce laws because the environment is always the least priority. For example, the Clean Air Act lacks stringent implementation. Shockingly, policymakers are now pushing for false solutions which go against these very environmental laws. The Solid Waste Management Board is another example. It only has us as a lone CSO representative, while the rests are government agencies or industry representatives. We need more representatives from the environmental sector who are willing and able to influence policymakers, mobilize supporters, and stay true to their stand in the face of criticism.

Organization’s work in the next several years

We see the Coalition growing stronger with more members and lending more voice for stringent policies. We also want to see the Coalition step out of our watchdog reputation and evolve to become a policy influencer. 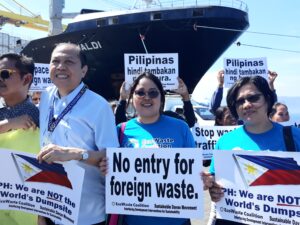 Plastic waste is a massive problem for The Philippines and other Southeast Asian countries. I can’t speak for those in other countries but, here, if only there was a robust implementation of the solid waste management law, then we would not have this much historical waste. It’s a shame because there are communities here in the Philippines which have adopted Zero Waste measures and are proudly doing well. An important lesson to learn here is thatthe implementation of the national solid waste management strategies in this country must keep up and align with the Zero Waste efforts of local government units (LGUs).

On collaborating with other NGOs in the region

We have a strong relationship with our regional partners, specifically in providing ample support in amplifying each other’s campaigns or sharing experts on the issue at hand. Recently, we collaborated with IPEN Southeast Asia on assessing the waste trade here in Southeast and East Asia. IPEN did magnificent research work and gathered substantial insights and data, without which we would not have been able to come up with such a comprehensive and informative webinar for all.

Right from the start, we have always included social and environmental justice in our calls — from clean air and Zero Waste to, more evidently, the informal waste sector and the health effects of dumpsites and landfills.

We want to erase the idea that consumers are to blame for plastic waste, and we want to stress that landfills and incinerators are not safe. If such facilities are truly safe, why not construct one beside a government official’s mansion? Why build it in poor communities?

People in environment work most admired

Four people come to mind. The first two would be Von Hernandez and Manny Calonzo. Because of their work, we have the Clean Air Act and we have the EcoWaste Coalition. Next, there’s Fr. Edu Gariguez. His dedication to preserving communities and the ecology of Mindoro is inspiring. And of course, there is Dr. Jorge Emmanuel. He is very knowledgeable, helpful, and eloquent. Despite being involved in this work for almost two decades, I still learn a lot from them, and for that, I will always admire them.