SUBIC, Philippines (May 30, 2019) — As the Philippines bid goodbye to the Canadian waste, six years after it was discovered in the country’s ports, environmental groups are calling on the government to ban all waste imports in the Philippines and ratify the Basel Ban Amendment. This follows the discovery of several other waste shipments to the Philippines from South Korea in 2018 and Australia and Hong Kong, which were divulged last week.

From 2013 to 2014, 103 shipping containers from Canada were intercepted in the Port of Manila containing mixed wastes,  including non-recyclable plastic, waste paper, household waste, electronic wastes, and used adult diapers. These materials are classified as hazardous, based on the Toxic Substances and Hazardous and Nuclear Waste and Control Act of 1990 (Republic Act 6969). Moreover, the importation of the shipment violates the Basel Convention, as the contents of the cargo vans were misdeclared as ‘recyclable’. 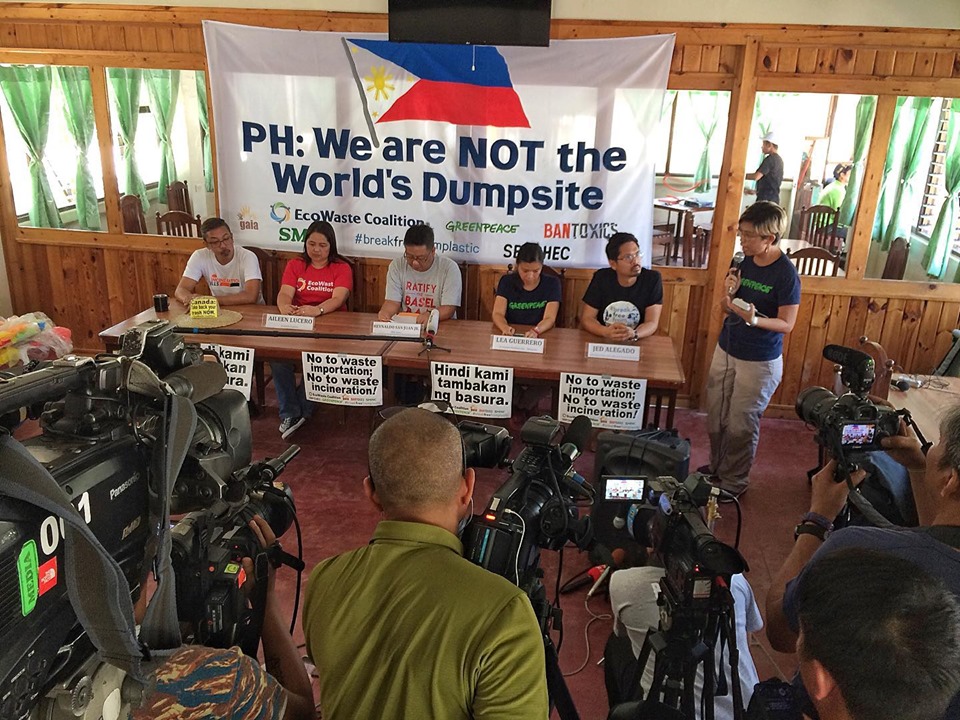 Photo during the press conference at Subic Bay in the Philippines where environment group bids goodbye to Canadian waste and calls on the government to to ban all waste imports in the Philippines and ratify the Basel Ban Amendment. Photo taken by Albertito Lozada (Greenpeace Ph) on 30 May at the Subic Bay International Container Port, Zambales, Olongapo City.

While the return of Canada’s waste is a positive development, only a little more than half (69 containers) of the original waste is being shipped back; 26 containers were already landfilled in the Philippines at the time when Canada disowned responsibility for the shipment; the other eight containers were also disposed of locally.

Aside from the controversial Canadian waste, shipments containing garbage from South Korea were discovered in October 2018. After campaigns from environmental groups in both the Philippines and South Korea, the Philippine government and its South Korean counterparts agreed to ship back part of the waste shipment in January 2019. The remaining 5,176.9 metric tonnes of waste are still in Misamis Oriental, awaiting repatriation.

In May 2019, the entry of wastes coming from Australia and Hong Kong in Mindanao Container Terminal became public.

Ever since China closed its doors to waste importation in January 2018, Southeast Asian countries have been the destination of waste exports from developed countries . A report from Greenpeace revealed that the majority of ‘mixed recyclable plastics’ previously destined to China are being redirected to countries in the region with weak environmental regulations. [1]

Local NGO groups, including Ecowaste Coalition, Greenpeace Philippines, Global Alliance for Incinerator Alternatives, BAN Toxics, and the global Break Free from Plastic movement, reiterated the call for the Philippine government to ratify the Basel Ban Amendment, which prohibits the import of all waste for any reason, including “recycling”.

The groups also launched an online petition [2] calling on President Rodrigo Duterte to declare a ban on the entry of wastes to the Philippines and to ratify the Basel Ban Amendment. Ecowaste Coalition called on all Filipinos to ‘raise the flag’ on social media to make a strong and collective stance against the entry of illegal waste shipment in the country. [3]

Notes to the editor:

[2] Ban entry of foreign waste to the Philippines.

[3] Ecowaste Coalition encourages Filipinos to raise the flag vs onslaught of foreign waste.

STATEMENT FROM ORGANIZATIONS ON THE REPATRIATION OF THE CANADIAN WASTE

“Today marks a high point in our nation’s history as we get rid of the illegal waste shipments from Canada after six exasperating years of struggle for environmental justice and the rule of law.  As the 69 shipping containers set sail for home, we say with conviction that the Philippines is not the world’s dumpsite. We need to learn from this prolonged ordeal and make sure it is never repeated. Never again shall we allow other countries to trash our dignity, our people’s health and the environment.

“This ordeal has taught us of the urgency of correcting outmoded regulations allowing waste imports into the country under the guise of recycling. We need to close this ghastly loophole that is facilitating illegal waste traffic and turning our country into a dumping ground for plastic, electronic and hazardous wastes, which should be safely recycled, treated or disposed of in the country where such wastes were generated.” – Aileen Lucero, National Coordinator, Ecowaste Coalition

“Canada’s waste shipment to the Philippines has put in the spotlight how developed countries are exploiting weak national regulations and loopholes in international conventions in order to dump waste they can’t process in poor countries. The fact that it took five years before Canada acknowledged responsibility for the shipment underlines the helplessness of developed countries when governments of importing countries do not cooperate.

“Imposing a ban to close our doors to all waste shipments and ratifying the Basel Ban Amendment will send a strong message that the Philippines is not a dumping ground. However we also need to plug internal holes. The waste shipments that have been exposed in recent years are likely only the tip of the iceberg. It is highly probable that many more waste shipments have entered the country undetected, or under false declarations or questionable circumstances. Unless the holes in the system that allow this to happen–whether faulty regulations, inadequate monitoring, or corruption–are plugged, we will continue to be at the receiving end of waste shipments–and worse, unable to hold responsible countries and parties accountable.” – Lea Guerrero, Country Director, Greenpeace Southeast Asia – Philippines

“While this is a momentous moment for the Filipino people, still, the country faces a number of issues related to hazardous waste shipments. As long as there’s nothing that protects the developing countries in becoming a dumping ground for unwanted toxic waste and garbage, we remain vigilant, and will continue to call out the government for immediate actions.

“We appeal to President Duterte, to ratify the Basel Ban Amendment immediately. Put the responsibility of policing hazardous waste exporters to the country of export, such as Canada, Hong Kong, and Australia. We need to be smart in addressing the problem, and the Basel Ban Amendment is a valuable tool towards protecting a significant portion of the population who are at risk by toxic waste dumping.” – Reynaldo San Juan, Jr., Deputy Executive Director, BAN Toxics

“While we laud the move of the Canadian government in finally acting on their illegal waste shipments in the Philippines, we are also wary about the recent illegal waste shipments  from other developed countries to the Philippines and the rest of Southeast Asia. Asia is not the developed countries’ dumping ground! The Basel Convention mandates countries to deal with their plastic waste in their own backyards. Since the Basel Convention amendment takes effect next year, we are challenging governments in Asia to take immediate measures in safeguarding their territories.” – Jed Alegado, Communications Officer for Asia-Pacific, Break Free from Plastic

“We have nothing else to blame but DENR for enabling these countries to dump their waste in our ports. By drafting guidelines on waste incineration, other countries are now more attracted to have their garbage burnt in our country.” – Glenn Ymata, Senior Campaign Manager, No Burn Pilipinas!