Green groups to DENR: Stop being an apologist for the plastics industry! 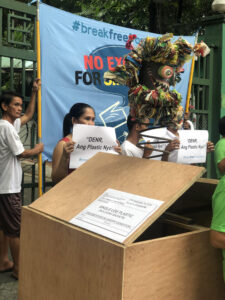 Jack-in-the-box installation made of single-use plastics for the Philippine Dept of Environment and Natural Resources. Photo by Sonia G. Astudillo/GAIA

Representatives of environmental organizations Ecowaste Coalition, Greenpeace Philippines, GAIA Asia Pacific, Mother Earth Foundation, Nagkakaisang Lakas ng Mga Mangangalakal sa Longos (NLM), and Samahan ng Mangangalakal ng Scrap sa Capulong (SMMC) delivered three monstrous  jack-in-the-box installations made out of single-use plastics bearing the names of the top  corporate polluters found in recent  brand audits conducted by local groups in the Philippines. The groups stressed  that the delivery was  intended to remind the DENR of its mandate to protect the environment and for the agency to stop serving as an apologist for the plastics industry and the companies who  profit from the extensive use of single-use and throwaway plastic packaging that often end up polluting and blighting waterways and ecosystems.

“By putting the blame on consumers and promoting false solutions such as waste-to-energy incineration technologies, and bioplastics, the DENR is  in effect promoting the agenda of  an industry that wants to continue with their  business as usual polluting practices. This makes the agency,  mandated to safeguard our environment, actually complicit in perpetuating the plastic pollution crisis.  Plastic pollution is not a joking matter,”  said Beau Baconguis, Asia-Pacific Coordinator of Break Free From Plastic and Plastics Campaigner of GAIA Asia Pacific. “The DENR should stop clowning around with its mandate and start offering  real solutions to this crisis,” she added.

For his part, Jove Benosa, Ecowaste Coalition’s Zero Waste Campaigner, said: “DENR officials have been mouthing industry lines that products sold in sachets and other single-use plastics benefit the poor. In reality, the poor communities are the ones suffering from the impacts of plastic pollution. What is urgently needed now is a national ban on single-use plastics and packaging, as suggested by President Duterte himself.  In addition, the National Solid Waste Commission must release the long-overdue list of non-environmentally acceptable packaging and products.”

Greenpeace Southeast Asia campaigner Abigail Aguilar added that the proposed national ban on single-use plastics should aim for a drastic reduction of the manufacture of single-use plastic products and packaging and their eventual elimination from the market. “Importantly, this ban must include the phaseout of sachet packaging,  and direct companies to redesign packaging for their products, and give incentives to reuse, refill, and other alternative delivery systems,” said Aguilar.

Meanwhile, Maricon Alvarez, Program Manager, Mother Earth Foundation, called for strict implementation of RA 9003 or the Ecological Solid Waste Management Act of 2000. “In developing countries like the Philippines, our work with communities has demonstrated that Zero Waste is a practical, viable, and sustainable solution to our waste problem. Single-use plastics (SUPs) are the biggest enemy of communities aiming for Zero Waste as these can neither be recycled nor composted. Now, more than ever, is the perfect time to ban these problematic materials,” she said.

Break Free From Plastic movement is composed of 1,800 organizations worldwide demanding massive reductions in single-use plastics and  pushing for lasting solutions to the plastic pollution crisis.