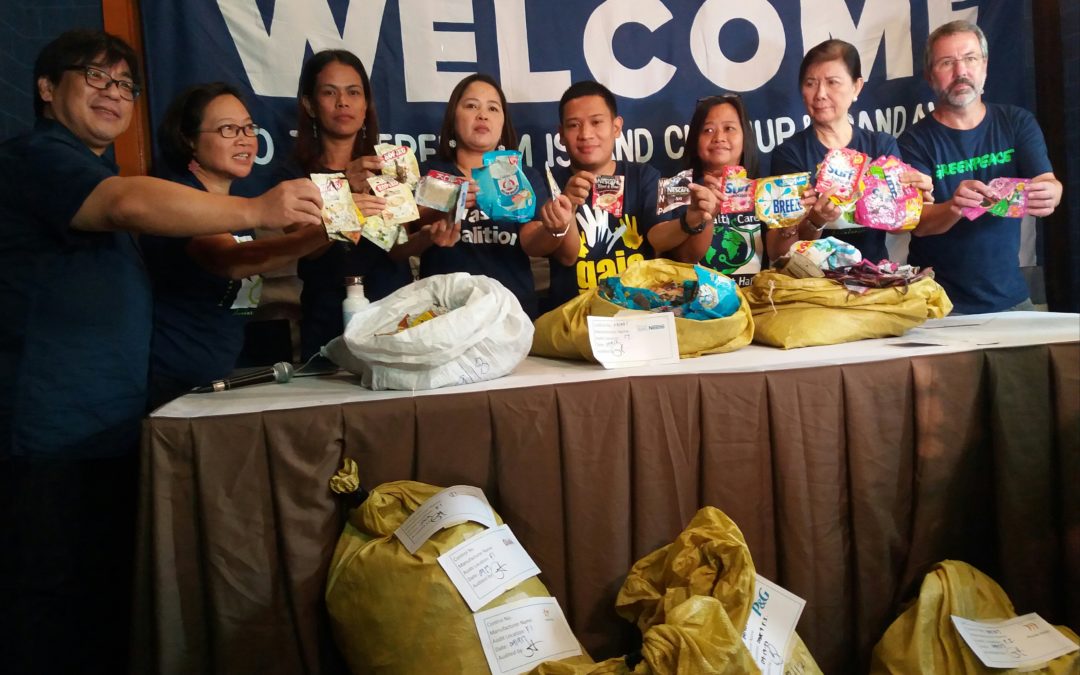 MANILA, Philippines (September 22, 2017) – International brands are among the worst oceans polluters—and  green groups under the global #breakfreefromplastic movement are holding them to account. The results from the groups’ eight-day beach cleanup, waste and brand audit on Freedom Island revealed that six international brands are responsible for 53.8% of plastic packaging pollution found in the designated ecotourism area,  which has been  declared  as a critical habitat for migratory birds. 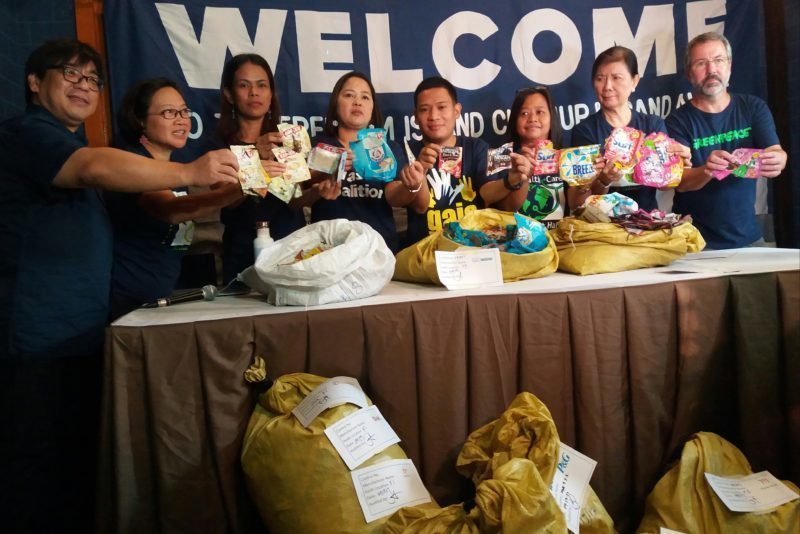 EVIDENCE. Representatives from the organizations that took part in the coastal cleanup and waste and brand audit show some of the products collected from Freedom Island.

The recent audits conducted by Philippine member organizations of the #breakfreefromplastic movement further revealed that zero value plastic packaging used  by Nestlé, Unilever, and Indonesian company PT Torabika Mayora in their various products are the top polluters in the area. Other global companies in the top ten are  Procter and Gamble,  Monde-Nissin, and Colgate-Palmolive. Out of the total waste collected  during the eight-day cleanup, 49.33% are plastic waste. Other types of waste found are diapers and sanitary products, glass, textile, etc.

“The enormous amounts and kinds of plastic trash that we found on Freedom Island dramatically  shows how the planet is drowning in single-use and throwaway plastic packaging—pushed upon us by corporations to maximize their profits,” said Von Hernandez, Global Coordinator of the Break Free from Plastic Movement. The evidence speaks for itself—it is time for  these companies to own up to their responsibility in spawning the plastic pollution crisis, which is proving to be a pernicious and pervasive global problem” he added.

The #breakfreefromplastic global movement which counts 900 member organizations globally, has launched various coastal cleanup activities in different parts of the world—Europe, North America and the Arctic. In the Philippines, its member organizations started an 8-day coastal cleanup and waste and brand audit in Freedom Island (Las Pinas Paranaque Critical Habitat Ecosystem Area or LPPCHEA) off Manila Bay which culminated on September 20.

“When we throw something away, there is no ‘away’. These global corporations are locking us into cheap, disposable plastics, rather than innovating and finding real solutions,” said Abigail Aguilar, Campaigner for Greenpeace Southeast Asia – Philippines. “For decades, these companies have managed to evade their responsibility for this worsening problem,  leaving  governments and taxpayers with the burden of dealing with the polluting legacy of their product packaging.” Aguilar added.

For his part, Froilan Grate, the Executive Director of Global Alliance for Incinerator Alternatives (GAIA) Philippines pointed out that the results are consistent with the results of the waste and brand audits that they have been conducting  in many other cities in the Philippines and other countries. “The companies that pollute our seas are the very same companies that have burdened communities with waste that  can neither be composted nor recycled,” he said.

“Worse,  some of these companies and their partners in government have been focusing on promoting wrong solutions to the waste crisis, particularly the so-called  “waste-to-energy” incineration technologies. Incineration is not the solution. You can’t solve this problem by transforming it into another  toxic  pollution  problem,” Grate explained.

GAIA and Mother Earth Foundation have been conducting waste and brand audit as part of their Zero Waste work in various cities and communities.

“To solve the problem of waste, we must turn to ecological solutions such as Zero Waste,” said Sonia Mendoza, Chairman of Mother Earth Foundation.

“In Asia, for example, cities and communities from the Philippines, China, South Korea, and India to name a few, have demonstrated that Zero Waste is a practical and viable solution to our waste problem. But in order for Zero Waste to work at a national scale, we need the government’s political will and support  to have it mainstreamed and  institutionalized,” Mendoza added.

For Ecowaste Coalition, a critical part of the solution to stem the tide of plastic pollution in the country is the enactment of a national policy that would discourage if not eliminate the use and proliferation of single use plastics and disposables. “We must address the problem at source. Clean-ups alone will never solve the problem of plastic pollution in the oceans. The Philippine government should learn from the recent strong actions taken by the  governments of  Rwanda, Kenya, and France to seriously address the problem by curbing and prohibiting the use of single-use plastics and disposables,” said Aileen Lucero, National Coordinator of the Ecowaste Coalition.

Detailed results of the audit can be accessed at www.plasticpolluters.org

Photos and videos can be accessed here.