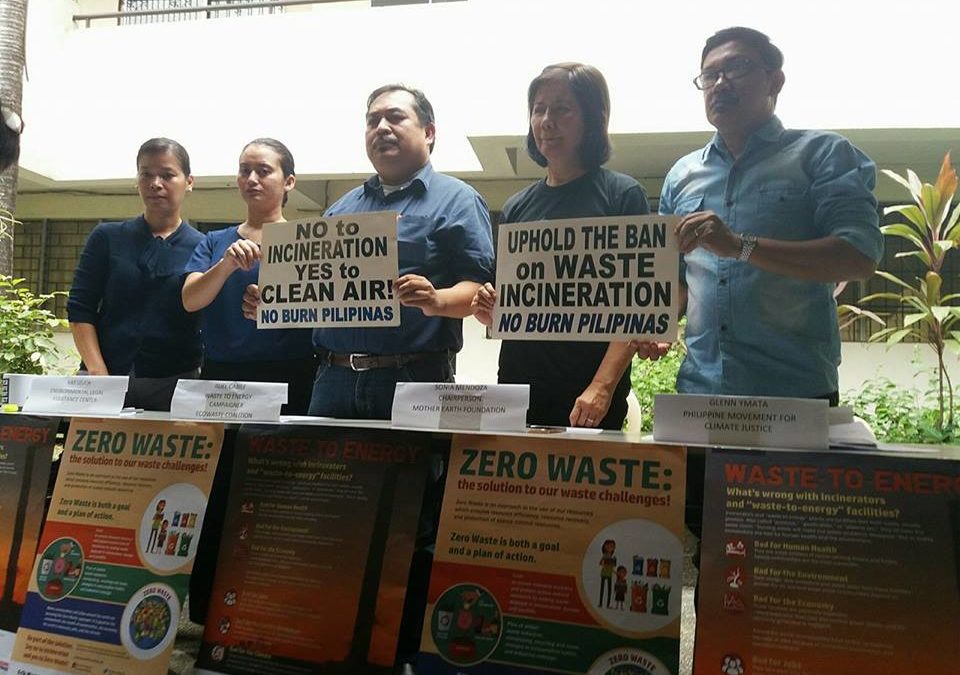 Quezon City, 18 April 2018 — NGO coalition No Burn Pilipinas today questioned the legality of the newly signed “waste-to-energy” (WTE) facility deal in Puerto Princesa, Palawan, as they warned cities and municipalities not to be duped by possible WTE scams. The group, which finds the 2.1 billion peso WTE deal in Puerto Princesa dubious, called on the Department of Energy (DOE) and Puerto Princesa City to immediately cancel the contract. 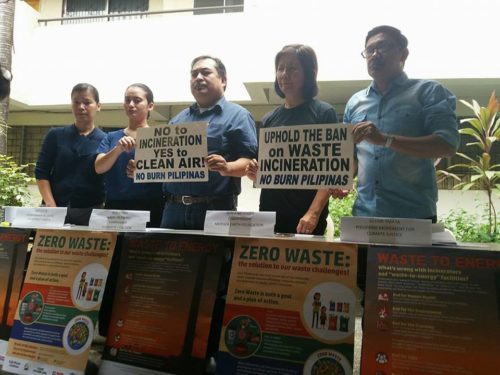 The groups were reacting to the recent report on the contract signing between the DOE, Puerto Princesa City and Austworks Corp., the facility provider for the construction of a so-called “waste-to-energy” plant. Under the deal, Austworks will build a purported “thermal gasification” WTE incinerator in the city’s Sta. Lourdes Sanitary Landfill, as well as well as provide garbage collection services. The WTE plant will supposedly generate 5.5 megawatts of electricity from the city’s 110 metric tons per day of waste.

The coalition No Burn Pilipinas contends that 1) the deal is illegal since waste incineration is banned under Philippine law; 2) the energy—if any—produced by the facility will be miniscule, and claims that the facility will pay for itself from the energy generated is false; and 3) there are no commercially operating thermal gasification WTE incinerators anywhere in the world. Moreover, the company involved, Austworks Corp. has no known record for building similar facilities anywhere in the world.

“The planned ‘waste-to-energy’ incinerator in Puerto Princesa is patently illegal under Philippine law,” said Ruel Cabili, WTE campaigner of EcoWaste Coalition. “It is a clear violation of the ban on incineration enshrined in the Clean Air Act. It also contravenes the Ecological Solid Waste Management Act which the government should be strengthening. Pursuing “waste-to-energy” incineration undermines segregation, recycling and reduction efforts—the very approaches which the government should be supporting.”

For its part, the Palawan chapter of the Environmental Legal Assitance Center (ELAC), noted that Puerto Princesa’s current sanitary landfill was intended to evolve into a Zero Waste management program, as provided in the Environmental Compliance Certificate (ECC) issued to the city government. “The pursuit of WTE would result to a violation of the ECC,” said ELAC Palawan representative Kat Leuch. “We hope that the Puerto Princesa City government can still reconsider its planned incineration project and prioritize Zero Waste management in its development masterplan. Being a hall of fame awardee in the ‘Clean and Green Program’ of the Philippine government, we expect the city government to sustain its environmental protection efforts,” she added.

No Burn Pilipinas partners are also questioning the DOE’s promotion of WTE incineration. “Waste incineration is the most expensive and inefficient way to produce electricity, with construction costing twice that of coal-fired power plants and 60% more than nuclear plants, and operations costing ten times more than coal, and four times more than nuclear,” Glenn Ymata of Philippine Movement for Climate Justice. “WTE incineration is bad for the climate and is not renewable energy; it takes investments away from real energy solutions such as wind and solar.”

Aside from the deal’s illegality, No Burn Pilipinas is doubtful that the facility will actually operate successfully even if it is constructed. “Gasification plants are some of the most complex and expensive incinerators, and are not recommended as suitable waste treatment facilities in developing countries. In fact, no commercial-scale gasification plant meant for the treatment of municipal solid waste exists anywhere in the world,” said Lea Guerrero, clean energy campaigner of Global Alliance for Incinerator Alternatives. “Gasification’s history of technical challenges and failures has led to shut downs in operation which have left some cities and taxpayers in debt, paying for prohibitively expensive facilities that never worked.”

Environmental groups say that cities and municipalities should be extremely wary of incinerator companies selling billion peso “quick fix” incinerators. The case of Palawan is not the first WTE deal that seems too good to be true. In 2011, Angeles City was also lured into investing in a USD 63 million WTE facility that never materialized.

In 2006, the City of San Fernando in Pampanga entered into a contract for a gasification facility that was started but never completed. However, shortly after the failure of the gasification plant, the City of San Fernando, chose to instead pursue Zero Waste—and succeeded. In partnership with Mother Earth Foundation, the city was able to drastically reduce the volume of municipal waste in just six months. In the past, the city brought almost 90% of its waste to landfills. In the last four years with a Zero Waste program which includes segregation at source and composting of organics, this figure was reduced to 30%, resulting to huge savings for the city.

“Zero Waste is still the best approach for the sustainable management of discards,” said Sonia Mendoza of Mother Earth Foundation. “Waste is a complex problem that can’t be solved by a machine that burns trash and merely converts solid waste to toxic air pollution. The government should support Zero Waste approaches instead of partnering with incinerator companies that sell false solutions to cities and municipalities.