The Green Africa Youth Organisation (GAYO) and the Centre for Coastal Management (CCM) joined the rest of the world to commemorate World Oceans Day, on the 8th of June 2021, with a call on individuals, organisations, industries and world leaders to protect world oceans.

The fight for climate justice through source reduction of plastics with continuous education and community engagements on illegal and indiscriminate plastic waste disposal is crucial! About 300 million tons of plastic waste are produced annually, but only 10% get recycled, with around 10-20 million tons of plastic entering the ocean every year. The United Nations Environment Programme predicts that if our bad practices are not curbed, there will be more plastics in the oceans than fish by 2050. This means there is a severe need to attend to plastic waste management globally. 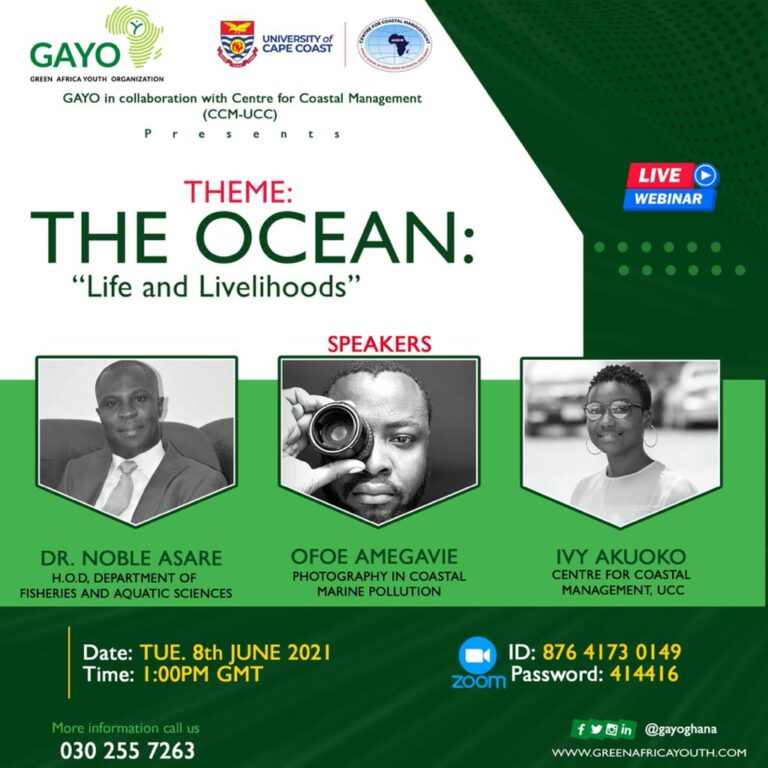 Celebrating World Oceans Day, on the theme, The Ocean – Life and Livelihoods, GAYO and CCM hosted a webinar to raise public awareness about ocean conservation and resource management. The webinar highlighted the importance of protecting the oceans for our survival and that of the marine ecosystem. This occasion was commemorated with a call to youth to participate in an infographic competition that portrays the most innovative and creative design to illustrate the plastic problem in Ghana, and how it affects the marine ecosystem. The activity was successful, as it was an opportunity to create awareness of our dying ocean and the need for action.

A total of 55 participants joined the webinar, where a clarion call was made to individuals to adopt pro-environmental behaviours on plastic waste management in the workplace and our environments. Some of these practices include; posting waste reduction prompts and segregating unavoidable waste to reduce the menace of plastics in the environment that eventually end up in the oceans.

From the webinar, it was highlighted that while waiting on governments to implement and enforce a ban on the manufacture and distribution of plastics, individuals were encouraged to bridge the value action gap that serves as a barrier to pro-environmental protection behaviours. Attitudes such as, ‘it is not my duty’, ‘I don’t have the capacity’, ‘my actions are negligible’ and ‘I can’t change the next person’, must be addressed if ocean lives are to be protected.

Currently, plastic waste in the ocean affects over 2.7 million people whose livelihoods are tied to marine ecosystem sustainability. The direct and extended impacts of plastic pollution on oceans jeopardise the income of fisher folks, processors and transporters alike. While some island communities in Africa adopt the innovation of using plastic wastes to create a sea defence to stay resilient against coastal erosion, the strategy is inherently deficient in standing high tidal waves that create sustainability challenges in dealing with plastic waste.

In atomisation of the current problem and ascribing the needed solutions, some relevant yet important factors have been overlooked. The culture of impunity, lack of infrastructure and lack of accountability from relevant stakeholders are some of the major causes of the problems. However, cosmetic products with microplastics as active ingredients were identified as contributors to the disruption of the marine ecosystem, with extreme negative impacts on the aquatic food chain.

Several ocean activists made these remarkable contributions during the webinar, including Dr Noble Asare, the Head of Department of Fisheries Sciences for the University of Cape Coast Ghana, Ofoe Amagavie, Photographer in Coastal Marine Pollution and Ivy Akuoko, Center for Coastal Management and Aquatic Representative.

At GAYO, our work prioritises the empowerment of young people to be environmental leaders and stewards in their local communities. Protecting our oceans is central to our duty towards environmental sustainability. By implementing our zero waste project in Cape Coast Metropolitan Assembly and the La-Dade Kotopon Assembly, GAYO is working with informal waste workers and youth to prevent plastic pollution (from single-use plastics) and marine debris.

The highlight of the webinar was the announcement of the best artistic work that illustrated the plastic menace within coastal bodies. Emmanuel Aidoo, a 23 years old University of Ghana student, was outstanding among the rest of the eight artistic works received. The selection was made based on the quality, content and creativity of the work. The second and first runner up was Ben Collins and Sir Bonney. 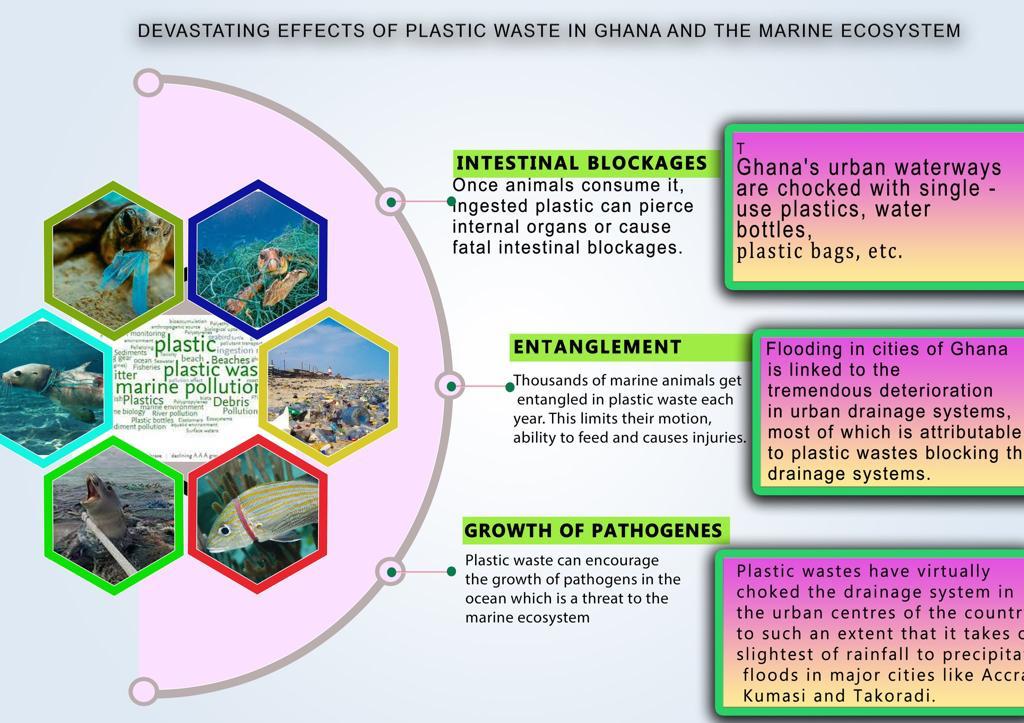 To end the event, Success Sowah and Nii Omaboe, who served as the moderators, commended the GAYO Eco Club in their outstanding services to the event’s organisation and thanked all who made it to the event. They ended with the quote saying: Ignorance is mostly projected to cause all the global problems. If humanity realises that, ‘Ocean is life, if you preserve the ocean, you preserve life’, all aquatic habitats would be protected accordingly.

Betty Osei Bonsu is a project coordinator at the Green Africa Youth Organisation.