IN LATE 2005, the City Council in Buenos Aires, Argentina unanimously passed a law, “Integral Management Of Solid Urban Waste,” a Zero Waste law. The law sets goals and milestones to reduce the volume of municipal solid waste going to landfill disposal. “The first milestone is 30 percent reduction of waste to landfill by 2010,” says Cecilia Allen of Global Alliance for Incinerator Alternatives’ (GAIA) Latin America office in Buenos Aires. “That is followed by a 50 percent reduction by 2012, and a 75 percent reduction by 2017. The law bans landfilling of recyclable and compostable waste by 2020.” The baseline used in the law is the tons of solid waste disposed in 2004 (1.5 million metric tons). 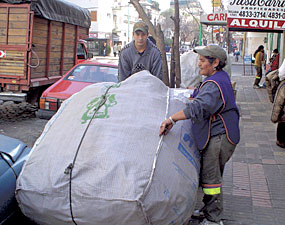 Impending closure of two of the three landfills servicing the city and surrounding region helped build political support for the Zero Waste law. CEAMSE (Coordinación Ecológica Area Metropolitana Sociedad del Estado), a joint venture of the government of the Province of Buenos Aires and the government of the City of Buenos Aires, has been managing urban waste in the Greater Buenos Aires region for almost 30 years. It owns the landfills, which receive up to 5,000 metric tons/day of municipal solid waste from the city alone. Garbage collection in Buenos Aires is mostly privatized, with five of the six districts serviced by contractors to the city. Buenos Aires city government services the sixth.

Culture of Cartoneros
Against the backdrop of “institutionalized” waste collection is an infrastructure of cartoneros, or waste pickers. The number of cartoneros grew significantly during the economic crisis that Argentina went through in 2001, but has since shrunk to an estimated 10,000 people. Entire families can be seen picking through the garbage set out at the curb. Primary materials recovered are cardboard and paper, as well as metals. Many use large canvas “sacks” mounted on wheels to hold the recovered materials. Stores owners typically keep cardboard and paper separated for the cartoneros, who have their certain territories within the various neighborhoods of the city. Many cartoneros, who live in the outskirts of the city, arrive on special trains designed to carry their carts. (One on-line blog noted that these trains were being shut down, making it more difficult for the cartoneros.)

It is estimated that the cartoneros recover about 13 percent of the garbage generated in Buenos Aires. They typically sell their materials to a broker, who in turn sells to processors of recycled feedstocks. While many cartoneros operate independently, there are about 10 cooperatives in the city of Buenos Aires. “The strategy to implement the Zero Waste law includes working with the cooperatives, having them operate the Resource Recovery Centers to be built,” explains Allen. “It also provides funds for them to acquire capital goods. The law recognized that the cartoneros were here before this policy was adopted, and these are the people who know about the waste and how to recycle it.”

The city government built the first Resource Recovery Center, purchased the machinery, and loaned the installation to the cooperative selected to operate the plant under a five-year agreement. The facility, the Bajo Flores Ecological Cooperative of Recyclers, opened on May 1st. An article in the Inter Press Service (IPS) News Agency reports that there are 30 cartoneros working in the plant, processing 10 metric tons of materials a day. The goal is to expand to 90 workers, and process 120 metric tons/day. “For now, we are practicing with small quantities to learn how to classify, but we will later have to learn to handle larger volumes and how to register purchases, sales and payments,” said Francisco Monzon, president of the Bajo cooperative, in the IPS article. Monzon’s cooperative was formed in 2002 in order to obtain better prices for the materials. According to the cartoneros, one problem they are facing is that a fair amount of recyclables never make it to the plants. That’s why they have proposed that the government start a program to monitor the private waste haulers.

The private companies providing waste collection in the five districts are required to build the remaining recycling centers as part of their service agreements with the city. Those will be owned by the city government, but operated by the cooperatives. Revenues from sale of recyclables go to the cartoneros. Two of the five are being built, although there are significant delays.

GAIA, together with Greenpeace, other environmental NGOs and cartoneros cooperatives, has been taking an active part in an advisory committee created by the law, proposing ideas to better implement the Zero Waste strategy. These include improving the communication campaigns, collection of yard trimmings, working with big waste producers, etc. They have also been pressing the government to speed construction of the resource recovery centers, as well as talking to neighbors who oppose these sites fearing that they are garbage disposal sites. Greenpeace has conducted a media campaign with TV spots asking people to call on the government to implement the Zero Waste law.

Last year, GAIA, Greenpeace and the national Citizens Anti-Incinerator Coalition stopped attempts by the city government to start incinerating solid waste, something the law bans until significant diversion (75 percent) has occurred. “The law is not being implemented as we had hoped, and the new government administration is showing dangerous attempts to cut citizens’ participation and go back ages by incinerating municipal waste,” says Allen. “But we see that more and more organizations and institutions are calling on the government to implement the Zero Waste law. We hope that this critical mass will make the administration stay on the right path.”

Organics Diversion Initiatives
A small yard trimmings composting site is operating at the CEAMSE landfill (the one that will remain open). It receives landscaping material from some of the gated communities in the Buenos Aires region, and from the city’s parks and separate trimmings collection system. GAIA recently hired a person to research opportunities for organics diversion, primarily from households and businesses in neighborhoods of the city. “Even though almost half of our waste is organic, the strategy to implement the law focuses on dry recyclable materials, so we’re aiming at starting small-scale composting systems within the city to show the importance and the feasibility of diverting organics from landfills,” says Allen.

The city is rolling out a two-bin collection system for households – a dry bin for recyclables and a wet bin for nonrecyclables and compostables. The dry bin materials will go to the Resource Recovery Centers. “The law talks about first separating dry and wet, then improving separation of the dry stream,” she adds. “The third step will focus on separating organics. The rationale for starting with the dry stream is that there is a market for these materials and this is what the waste pickers focus on.”

The 2005 Zero Waste law also includes Extended Producer Responsibility provisions. This eventually can require producers and importers to modify the way their products are packaged or designed, and to implement return/takeback programs.