Zero Waste by 2020 in San Francisco 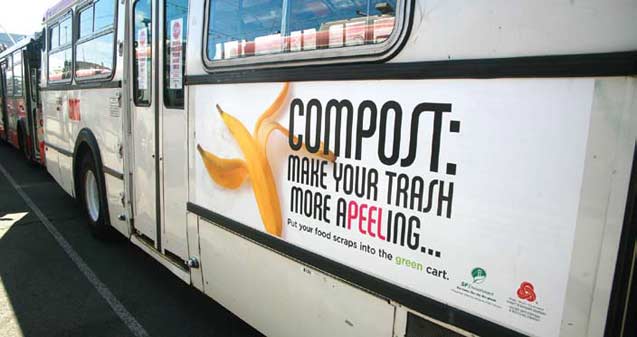 East Coast residents have spent the last few days surveying storm damage, calculating how long it might take for water-clogged coastal towns to drain, and waiting half-days in gas lines before returning to cold and darkened homes. Meanwhile, more than 8,000 displaced by last week’s cyclones in Chennai scrape together the basics of survival, Manila residents clean up from torrential August floods, and Beijing re-evaluates city infrastructure after July’s deadly typhoon. The message is clear: climate change is real, and it’s serious. One way cities can significantly reduce their greenhouse gas emissions and help prevent the escalation of global warming is by implementing zero waste practices.

“Environmental Possibilities: Zero Waste” features new ways of thinking, acting, and shaping government policy that are circling the globe. Each week, we highlight a success story in the zero waste movement, excerpted from the report On the Road to Zero Waste: Successes and Lessons from Around the World by the Global Alliance for Incinerator Alternatives (GAIA). GAIA is a powerful worldwide alliance of more than 650 grassroots groups, non-governmental organizations, and individuals in over 90 countries. Their collective goal is a just, toxic-free world without incineration. Other Worlds is excited to promote the work of GAIA and the organized communities it works with, and hopes that the stories inspire you and others to begin moving your home, town or city, nation, and planet toward zero waste.

San Francisco has established itself as a global leader in waste management by diverting 77% of its waste away from landfills and incinerators. The city has achieved its national distinction through a three-pronged approach: enacting strong waste reduction legislation, partnering with a like-minded waste management company to innovate new programs, and creating a culture of recycling and composting.

San Francisco’s zero waste journey began with enactment of a state law in 1989, the Integrated Waste Management Act. The law required cities and counties to divert 25 percent of municipal solid waste by 1995 and 50 percent by 2000. Over the last two decades, San Francisco built upon this requirement by passing several successive ordinances that targeted additional areas of the waste stream.

In 2002, the city set an ambitious goal of achieving zero waste by 2020. Since then, legislation has pushed the city, residents, and businesses to increase their recycling rates. These waste reduction laws include an ordinance on recovery of construction and demolition debris, passed in 2006, and a requirement that restaurants use compostable or recyclable take-out containers in 2007. In 2009, after residents and businesses became accustomed to voluntary composting, San Francisco passed a landmark law that mandated recycling and composting for all residents and businesses. More recently, the city passed an ordinance requiring all retail stores to provide compostable, recycled, or recyclable bags starting October 2012. All of these laws have been timed so that the necessary infrastructure is available, and participants are given support, tools, and education.

A statewide bottle bill mandates a 5 or 10 cent refund on glass and plastic bottles, and established more than 20 recycling centers in the city where residents or collectors can turn in their bottles and get their refund.

One reason for these laws is a citizen base that demands commitment to environmental sustainability. San Francisco has activated and empowered civic leaders, including advocates from the environmental field.

Another driver for passing these waste reduction laws is the cost associated with dumping garbage into a landfill in Livermore, 82 km away, where San Francisco hauls its waste daily.

The city government, which produces 15 percent of the city’s waste stream, is committed to lead by example. For this reason, three government employees are primarily focused on government waste reduction and management. To help reduce waste, an online virtual warehouse facilitates exchange of surplus supplies among city agencies. It also aids the city in green purchasing.

The city’s Department of the Environment is responsible for reaching the city’s zero waste goals. The Department has a small Zero Waste team which focuses on outreach, implementation of city-mandated recycling programs in sectors, and advancing waste reduction policy at the local and state level. In addition, there are separate outreach programs within the Department of the Environment, employing 20 environmental advocates. Most of these positions come from Environment Now, an annual green job training program run by the department. Participants in the Environment Now program come from all over San Francisco, particularly underserved communities of color. Because they hail from these areas themselves, the advocates are able to reach traditionally hard-to-reach audiences and improve community participation in environmental initiatives.

Part of the city’s success can be credited to consistent funding – not from the city, but directly from the rates paid for garbage collection. The overall budget for the Zero Waste Program is approximately US$7 million annually, which funds come from the collection revenues of the city’s private waste-management partner.

The Department works closely with Recology, the sole waste collector in San Francisco. Recology is a merger of the two waste picker federations which emerged in the 1920s. Recology’s unionized workforce collects, recycles, and disposes of all commercial and residential waste in the city. Over time, the city and Recology have developed a symbiotic relationship. San Francisco conducts oversight, policy development, outreach, and research on technology and best practices, while Recology creates, tests, and runs infrastructure to collect and process trash, recyclables, and compostables. San Francisco maintains influence over Recology’s activities primarily through a rate-setting process that occurs every five years. The city meets with Recology weekly to discuss any outstanding issues and next steps for programs. Recology has also developed a market for compost that goes to local farms and gardeners.

One outcome of this collaboration is San Francisco’s current recycling system, the Fantastic 3. Started in 1999, the Fantastic 3 program uses black, blue, and green carts for trash, recycling, and composting, respectively. Businesses and residences segregate waste, and double-chambered back-loading trucks pick up the trash and recycling bins, while smaller side-loading trucks pick up compostables. Garbage and recycling collection rates give price incentives for recycling and composting.

Another benefit of the longstanding relationship with Recology is that the city and company both value local hiring and well-paying, union jobs. The agreement between the city and Recology requires Recology to fill entry-level jobs first with San Francisco’s Workforce Development System, so that these jobs go to economically disadvantaged people from the city. The jobs start at $20/hour, compared to the city minimum wage of US $10.24/hour. The city also requires that Recology provide health benefits for its 2,500 workers. Employees bought out the company in 1986 and started an employee stock options plan.

San Francisco is close to ensuring full adoption of the Fantastic 3 program; it has taken two decades for a behavioral and cultural shift to occur across the city. Approximately 80 percent of the city’s 18,000 to 20,000 commercial accounts are in compliance with San Francisco’s mandatory recycling and composting law, while all residential buildings with fewer than six units separate their organics for collection, as do most of the large-scale multi-family dwellings (7,200 of 9,000). The city is now focusing on the remaining 1,800 buildings of six or more units that may not be composting, estimated to be 20 percent of buildings in San Francisco. This includes public housing, single-room occupancy residences, and rent-subsidized buildings.

In 2010, San Francisco contributed 15 percent less to the landfill than it did in 2009, and only about half of what it landfilled in 2000. San Franciscans each generated 1.7 kg of waste, 77 percent of which was recycled. The city estimates that of the remaining 23 percent another 75 percent is recyclable, which would bring the recycling rate up to 90 percent.

While aiming for adoption by the last 20 percent of larger multi-family dwellings and businesses and overall increased recycling rates, the Department of the Environment is also setting its sights on a new plant to sort the garbage itself. A low temperature, mechanical/biological separation plant, possibly with anaerobic digestion, would allow sorters to pull apart bags of garbage and recover smaller parts of the waste stream.

The city of San Francisco has been extremely successful in altering the minds, habits, and culture of its citizens to accept the goal of zero waste. In the US, this is no easy feat, especially given negative perceptions related to food scraps and wet waste in general. In March 2012, the city marked its millionth ton of organic waste turned into compost. The city is well on its way to meeting the zero waste deadline of 2020.