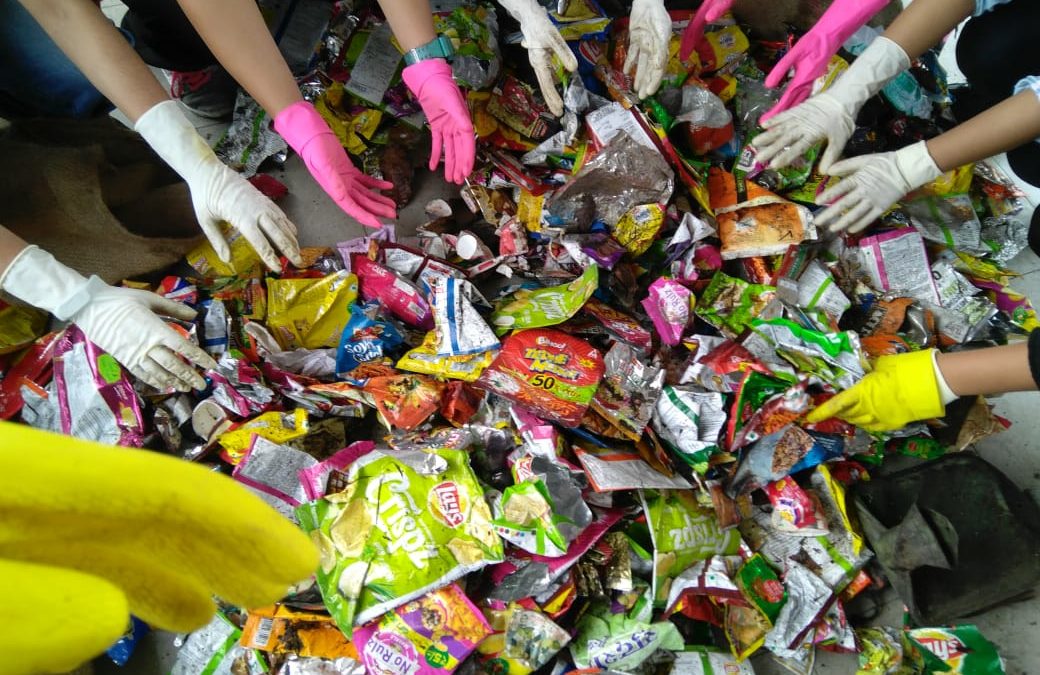 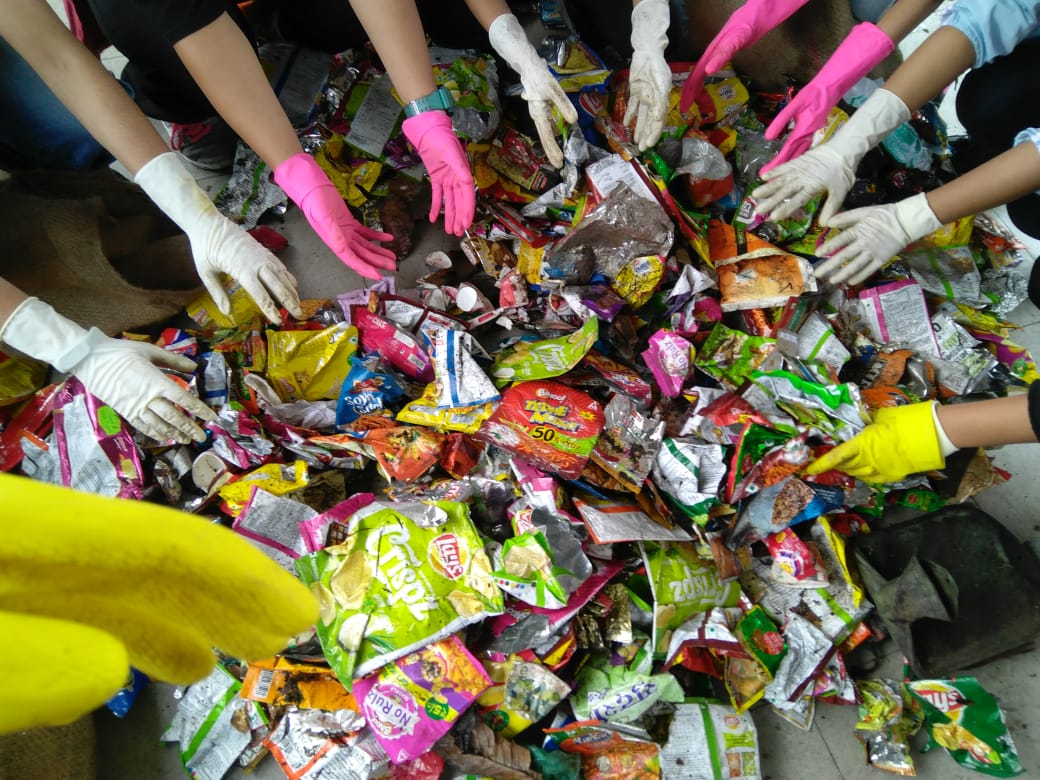 Thousands of volunteers participated in the pan-India waste and brand audits. Photo by Roshan P. Rai of Zero Waste Himalaya

New Delhi, India (June 4, 2018) — On the eve of World Environment Day, environmental organizations in  India challenged corporations to beat plastic pollution by drastically reducing the production and use of single-use and low-value plastic.

The call came as the groups revealed the results of their unprecedented coordinated clean-up and waste and brand audits which showed that a tremendous amount of single-use plastic polluting the environment is used by manufacturers for packaging of fast-moving consumer products (FMCG).
“The numbers are staggering. There is simply too much plastic in the environment. This has to change,” said Pratibha Sharma, National Coordinator of GAIA India. “Corporations cannot continue polluting the environment, make money out of the problem they are creating but contribute nothing to cleaning up the pollution they cause. The government must ensure that the corporations cannot continue doing business as usual, by enacting a comprehensive extended producer responsibility policy,” she added.

From May 16 to 26, ten GAIA member organizations and partners conducted clean-up and waste and brand audits in 18 states in India. Of the total waste collected, 46,100 pieces of plastic waste were branded, of which 47.5% were multilayer plastic packaging which can neither be recycled nor composted.

Results showed that both local and international brands are responsible for the plastic waste pollution in the country. PepsiCo India topped the multinational polluters list, followed by Perfetti van Melle and Hindustan Unilever, an Indian subsidiary of Unilever, as second and third, respectively. Other multinational brands in the top 10 list of polluters are Coca-Cola, Mondelez, Nestle, Procter & Gamble, McDonald’s, and Ferrero SpA. Meanwhile, Amul, Britannia, ITC, Parle emerged as the top corporate polluters amongst the national brands.

“The FMCG segment which consumes more than 50% of plastics produced are leaking the same into our environment unattended. This is leaking public money into drains. The primary function of packaging materials has changed from protection to advertising brand names. This has to be challenged; the plastic industry in general, and brands, in particular, should be held liable for the plastic pollution,” said Shibu Nair, Executive Director of Thanal, the anchor organization of the waste and brand audits conducted in Thiruvanthapuram, Kerala. 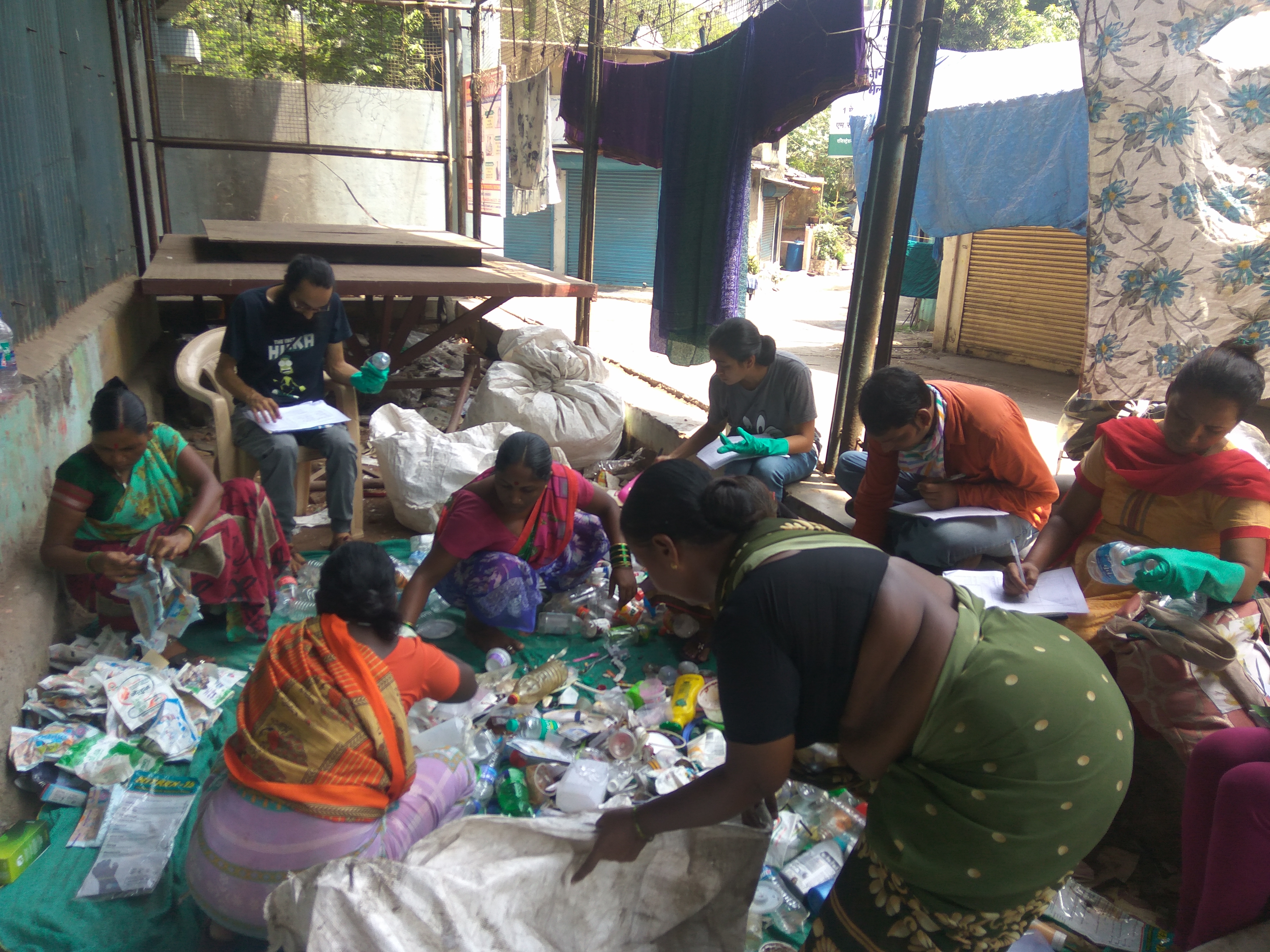 Thousands of volunteers turned up in the waste and brand audits. In Himalaya alone, over 15,000 volunteers participated in the clean-ups. Photo taken in Mumbai by Pratibha Sharma.

The audits were conducted as a lead-up activity to this year’s World Environment Day celebration with the theme, “Beat Plastic Pollution.” Environmental groups across different cities and regions of India—Bengaluru, Chennai, Darjeeling, Dehradun, Delhi, Goa, Himachal Pradesh, Kolkata, Leh, Mumbai, Nagaland, Pune, Sikkim, and Trivandrum—took part in this exercise. They covered urban metros and mini metros along with ecological fragile zones such as beaches and rivers and hard-to-reach mountainous regions to account for diverse demographics and lifestyle standards.

“Through the brand audit activity, we found that there is a huge amount of waste in the form of single-use and multilayer plastic packaging that get generated at a very high rate every single day. Such plastic waste is not only detrimental to the environment in terms of plastic pollution but is also causing frequent floods and drainage problems in Mumbai and other cities. Even from the recycling point of view, multilayer packaging is very problematic as it has zero to low value, and waste pickers find it very challenging to collect,” said Jyoti Mhapsekar, founder of Stree Mukti Sanghatana, a Mumbai-based organization that works closely with waste pickers.

While India has a low plastic consumption per capita as compared to its western counterparts, this consumption is going up steadily and could double within a decade or less. Manufacturers of FMCG are pushing the disposable culture and sachet economy in developing countries using the argument that small quantities of their products allow for shampoos, detergents and other consumables to be easily available, accessible and affordable to the poor.

“Currently, a huge cost of managing the post-consumer waste is being externalized to the environment, cities and communities. If the costs of the collection, handling, transport, storage and recycling of their packaging waste were to be incorporated, it will undoubtedly make it unaffordable to the poor. Manufacturers and brands need to look at alternative dispensing mechanisms such as refill systems, to continue to allow the consumers to access them,” said Kripa Ramachandran, researcher at Citizen consumer and civic Action Group, a Chennai-based organization working on building Zero Waste systems in Chennai.

In contrast with corporations’ inadequacy in addressing the plastic pollution problem, cities and communities across India are demonstrating Zero Waste solutions that can be adopted by cities and regions throughout the world. In Kerala’s Suchitwa Mission, a Green Protocol was launched recently as part of the government’s anti-plastic drive and Green-Kerala Mission. The Green Protocol restricts the usage of plastic and other non-degradable articles including disposable glasses and plates and thermocol decorations in social and official functions.

In Pune, SWaCH, a cooperative of over 3,000 wastepickers, recycled 50,000 tons of waste from 600,000 households in 2016 alone. Waste-pickers in India are essential to a circular economy, and companies need to  design their products and packaging with their health and well-being in mind.

Of the total waste collected, 46,100 pieces of plastic waste were branded, of which 47.5% were multilayer plastic packaging which can neither be recycled nor composted.

“Today, the entire recycling sector, with the wastepicker at its base, subsidises the manufacturing industry. A lot of recycling in developing countries internalises several costs by compromising the health, safety, and statutory entitlements of the workers involved in the industry, and the environment. Only if one added to it the environmental and health impacts and costs of the petrochemical industry can a more realistic assessment of the actual calculations towards the ubiquitous disposable plastic straw, bag of milk, carrier bag, or cup of tea emerge,” said Lakshmi Narayan, founder of SwaCH.

“Addressing plastic pollution requires consumers, producers, policy makers, and waste managers to take responsibility. However, producers make the choices about product design, packaging, and delivery. We urge the Government of India and all state and city governments to hold them liable for the environmental and social costs that result from their choices,” said Satyarupa Shekhar, Director for Research and Advocacy at CAG.Participating groups in the World Environment Day Brand Audits in India have issued a short report with specific demands for policymakers, as well as for corporates to reduce and redesign their products and packaging. 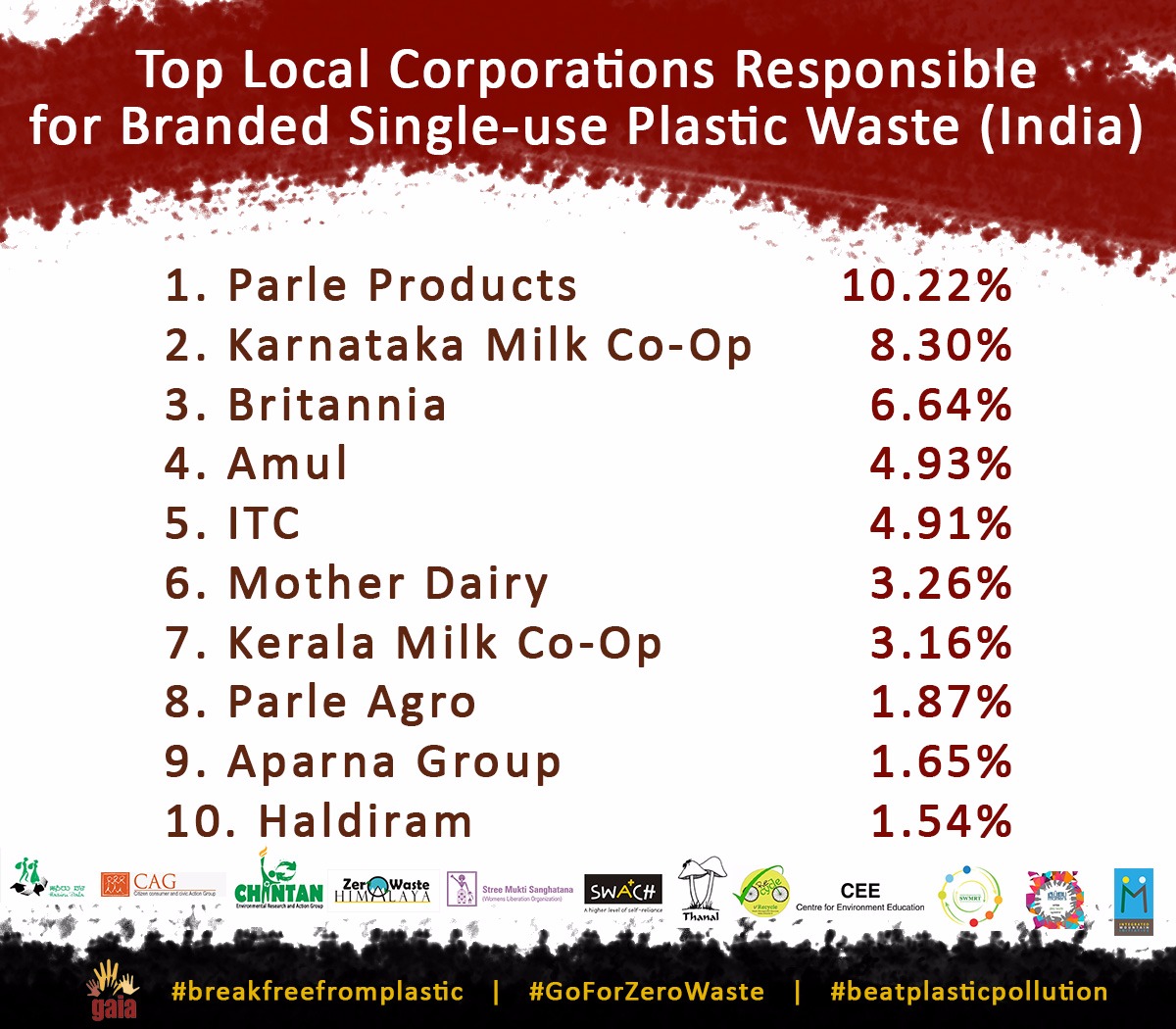 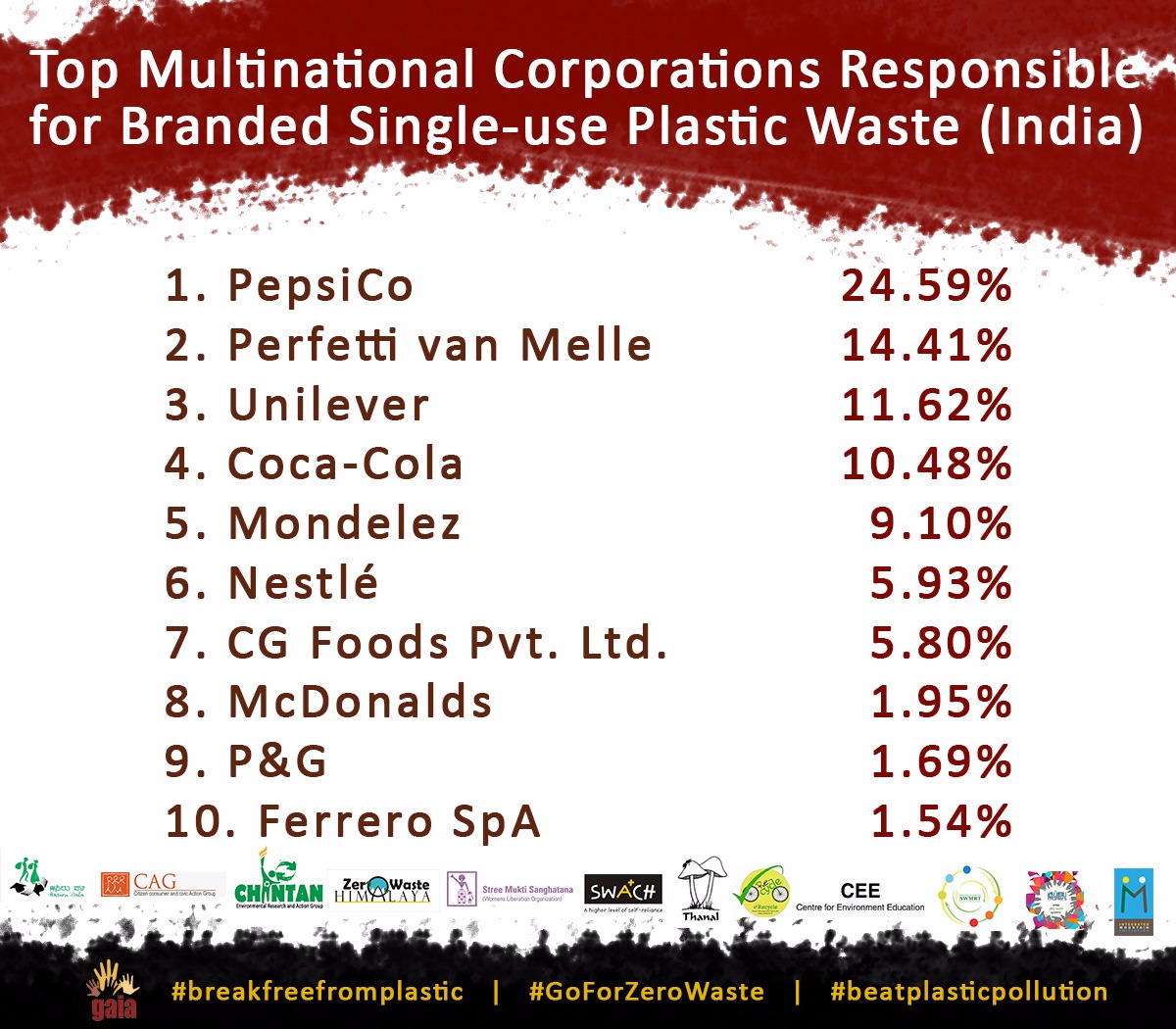