Trash Landing on You: Uncovering the dirty business of the global waste trade Affected communities call for an end to the plastic waste trade 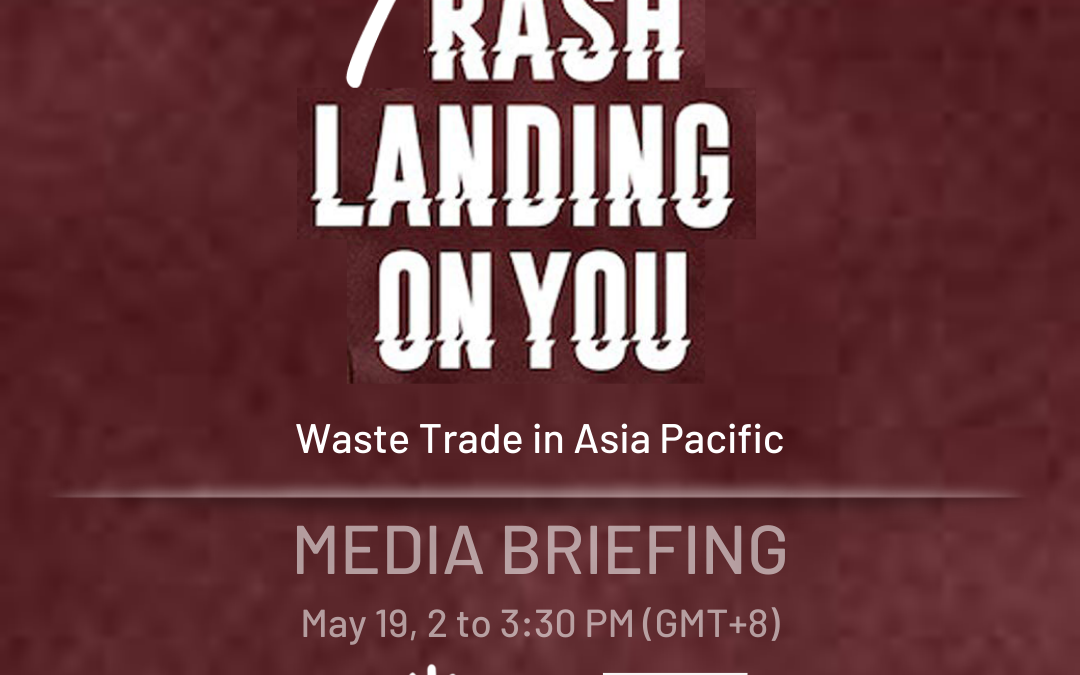 19 May 2021 – The Global Alliance for Incinerator Alternatives (GAIA) Asia Pacific together with #breakfreefromplastic is holding a media briefing today on the ongoing plastic waste trade. With speakers from both receiving and exporting countries, the event is a deep dive into the environmental and social issues brought about by the trade.

For almost 3 decades, the trade in plastic waste has persisted and eventually worsened as China shut down its doors from receiving wastes in 2018. In effect, surrounding countries such as Malaysia, Thailand, Sri Lanka, and Vietnam became the new favourites of plastic waste exporters. However, most receiving countries lack proper waste strategies and facilities thus leading to the open dumping or burning of waste materials which adversely affects the health of communities and the environment.

Although efforts have been put into place to stop the illegal trade in plastic waste, countries in the Asia Pacific continue to fight an uphill battle against a torrent of unlicensed and unrecyclable wastes. In May 2019, the Philippine government – pressured by calls from civil society organisations – sent tonnes of mislabelled garbage back to Canada. Similarly, in 2020, Tunisia received containers of mixed municipal waste deceptively labelled by the Italian company Sviluppo Risorse Ambientali as recyclables. In April 2021, Malaysian authorities announced that over 300 shipping containers of illegal waste were sent back to its countries of origin.

Citing the Basel Convention, Mageswari Sangaralingam of the Consumers of Association of Penang states, “Regulations are vital and acquiring informed consent from receiving countries is a favourable first step to restraining the onslaught of plastic wastes.  We need to plug the loopholes, besides ensuring robust monitoring and enforcement measures to tackle illegal waste trade.”

Hemantha Withanage of the Centre for Environmental Justice (CEJ) stated that the plastic waste trade is a form of injustice and stressed that the Asia Pacific is not the world’s dumping ground. “Laws are needed to address injustices and CEJ together with the rest of the Asia Pacific will utilise those laws to keep the region safe from the harmful effects of toxic waste.”

Ray Yeung of The Green Earth agrees and shares that Hong Kong has been a major free port of the plastic waste trade between wealthy economies and developing countries. However, Hong Kong has recently revised its policies and strengthened the enforcement of regulations ensuring that traders have obtained necessary permits before the arrangement of waste shipment. Since the revision, the amount of re-exporting plastic scrap dropped over 70% in February and March this year. Yeung urges the Environmental Protection Department to beef up their gatekeeping role. “Hopefully, Hong Kong will no longer be a part of this illegal practice. We will closely communicate with our partners from the Asia Pacific and we will stay vigilant and keep a close eye on inbound containers.”

Environmentalist and Indigenous rights campaigner, Tina Ngata shared, “Compared to other developed countries, New Zealand is behind in managing its wastes. While laws and stricter regulations can help curb the influx of plastic waste, the long-term solution is to completely break away from single-use plastics. What we do and what we consume affects the whole.”

With journalists from international and regional media in attendance, the media briefing offers insights into government regulations and how communities are standing firm, stressing that the Asia Pacific is not a massive landfill for plastic waste.

About GAIA  |  Global Alliance for Incinerator Alternatives is a worldwide alliance of more than 800 grassroots groups, non-governmental organizations, and individuals in over 90 countries whose ultimate vision is a just, toxic-free world without incineration. www.no-burn.org and www.zerowasteworld.org

The #breakfreefromplastic Movement is a global movement envisioning a future free from plastic pollution. Since its launch in 2016, more than 11,000 organizations and individual supporters from across the world have joined the movement to demand massive reductions in single-use plastics and to push for lasting solutions to the plastic pollution crisis. Break Free From Plastic runs the #WeChooseReuse campaign, calling for a global shift towards refillable and reusable products.

In 2020, Hong Kong re-export 100,000 tonnes of plastic waste which equivalent to five thousand containers to Southeast Asia countries, including Vietnam, Thailand and the Malaysia.

Since the Basel Convention was ratified last year and implemented on January 1, 2021. HK EPD has then formulated the “Guidelines and References for Waste Plastics Import and Export Control”, which requires proper declaration for import or re-export of regulated waste plastics.