The Story of Cap & Trade: Why you can’t solve a problem with the thinking that created it 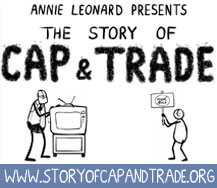 Hosted by Annie Leonard, the creator of the viral video hit The Story of Stuff, (viewed worldwide over 8 million times), the Story of Cap & Trade is the first in a series of six short films the Story of Stuff Project is releasing over the coming year with Free Range Studios (www.freerangestudios.com) and more than a dozen of the world’s leading sustainability organizations.

The Story of Cap & Trade takes a provocative but humorous look at cap and trade, the leading climate solution under consideration in Copenhagen and on Capitol Hill. Employing the same urgent honesty that made The Story of Stuff so successful-and flash animation that makes it clear who wins and who loses-The Story of Cap & Trade points to the ‘devils in the details’ in current cap and trade proposals: free permits to big polluters, fake carbon offsets and, most importantly, distraction from the significant tasks at hand in tackling the climate crisis.

“The Story of Cap & Trade helps viewers understand what’s on offer from world leaders and argues that we can and must do better,” said Annie Leonard, Director of the Story of Stuff Project. “We’re releasing the film now, in the run-up to Copenhagen, to ensure that Americans and others clearly understand the solutions on the table and to inspire them to push our leaders for real solu¬tions to climate change.”

The film introduces the people at the heart of cap and trade, including the guys from Enron who designed energy trading, and the Wall Street financiers like Goldman Sachs. Its animated characters walk viewers through both the theory of emissions trading and how it works in the real world, remind¬ing viewers that when this $3 trillion bubble bursts, it could take down everything.

Current cap and trade proposals hand the future of our planet to the very people who created the problem in the first place. We need effective and just solutions to climate change, not gimmicks and giveaways to polluters,” said Daphne Wysham, Co-Director of the Sustainable Energy and Economy Network.

The Story of Cap & Trade also points to more effective ways to tackle the climate crisis. The film’s web¬site will serve as an interactive launch pad for information with actions people can take to address the climate change crisis. The site features dozens of organizations working toward real climate solutions, offers viewers a series of ways to get involved and includes downloadable resources and information, including a footnoted script.

The following people are available for interviews about the film:

Daphne Wysham is a fellow and board member of the Institute for Policy Studies, founder and co-director of the Sustainable Energy and Economy Network, a project of IPS, and founder and co-host of Earthbeat Radio, which airs on 54 stations in the U.S. and Canada.

Janet Redman is the US Coordinator of Climate Justice Now! and co-director of the Sustainable Energy and Economy Network, a project of IPS.

Jonah Sachs is a founder and current Creative Director of Free Range Studios, the producer of The Story of Cap & Trade