The folly of waste-to-energy incineration 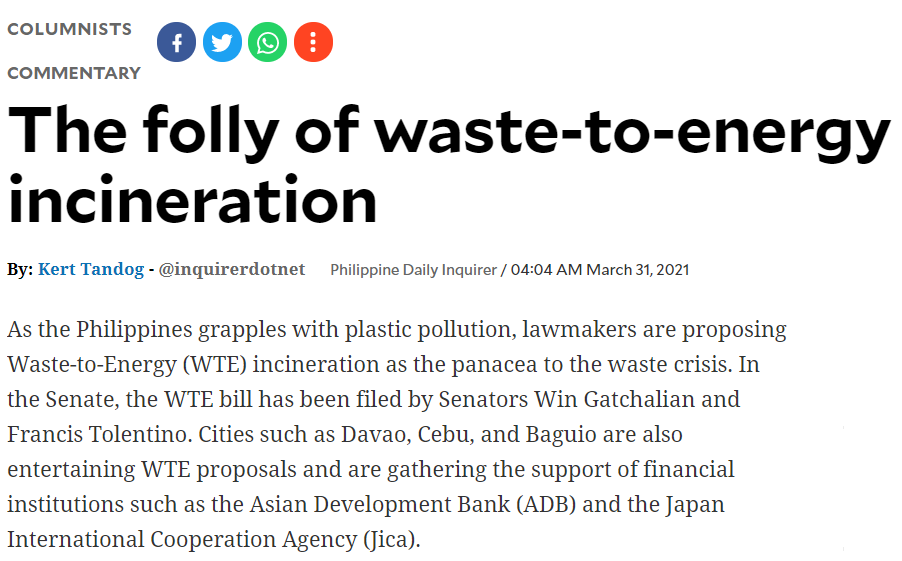 As the Philippines grapples with plastic pollution, lawmakers are proposing Waste-to-Energy (WTE) incineration as the panacea to the waste crisis. In the Senate, the WTE bill has been filed by Senators Win Gatchalian and Francis Tolentino. Cities such as Davao, Cebu, and Baguio are also entertaining WTE proposals and are gathering the support of financial institutions such as the Asian Development Bank (ADB) and the Japan International Cooperation Agency (Jica).

While technocrats see WTE incineration as a quick-fix solution to the waste problem, many studies have shown that it can compromise the health of people working in such facilities as well as those residing nearby. It emits hazardous and cancer-causing byproducts such as dioxins and furans. It has also high carbon dioxide emissions since it requires burning residual plastic wastes, which come from fossil fuel.

Waste-to-energy is deeply embedded in the discourse of environmental justice because it exacerbates social inequities and puts at risk those who are most vulnerable. There is a wide social and economic disparity between those who benefit from WTE and those who are harmed, as incinerators are usually built in marginalized communities that are already politically and economically disadvantaged, thus causing further health risks to these people.

Waste-to-energy is also enmeshed in global power struggles. Sweden and Norway have been fighting over the dominance of importing garbage from other European Union countries. In a race to the bottom, they are also battling over what to do with the toxic ash derived from WTE incinerators. These toxic substances cannot be disposed in any location. They need a special landfill made for the treatment of hazardous waste. In 2015, Sweden dumped its WTE toxic substances in a Norwegian island near Oslo, causing dispute between the two countries. Illegal dumping of WTE toxic substances occur in other European countries such as the United Kingdom because of failures in regulation.

Sweden, touted as a model for waste management, claims to have a high recycling rate but in truth, it conflates incineration with recycling. Furthermore, it manipulates its waste data by leaving out toxic ash from its municipal waste data, making it look like its recycling rate is high. In the Netherlands, a report by ToxicoWatch revealed that faulty testing methods by the Reststoffen Energie Centrale WTE power plant made it appear that it emits less toxic substances than it actually does. With the problems in WTE facilities and the minimal energy gains from them, such facilities are being shut down in many areas around the world, such as in Detroit and California in the United States.

In Asia, WTE contractors and funding institutions are setting their eyes on the Philippines, despite the incineration ban stated in the Clean Air Act. This is alarming. First, the Philippines has a problem with regulatory capacities; it may fail to monitor and assess the environmental impacts of incineration. Second, the pollution from incinerators can set us back from our climate targets. Third, it can cause and exacerbate illnesses in the country such as respiratory disease, which is already one of the leading causes of mortality in the country. Fourth, it will not contribute to post-COVID-19 recovery because WTE projects cost billions, which the public will shoulder through exorbitant tipping fees. Furthermore, much like Sweden and Norway, we may resort to importation of trash in order to feed the “beast,” thus, the possibility of becoming the world’s dumpsite. This is not impossible, given that Global North countries have already started dumping their trash in our country.

It is imperative to call on the Senate to scrap the WTE bill, and for the ADB and Jica to stop funding this contentious and polluting technology. Support must instead be given to genuine Zero Waste solutions. As we have seen from the experiences of other countries, WTE incinerators cause more harm than good. We can expect such problems to be magnified in the Philippines.

Kert Tandog teaches anthropology at the University of the Philippines Mindanao. Her research interests are environmental anthropology and political ecology.

This commentary appeared in The Philippine Daily Inquirer https://opinion.inquirer.net/138952/the-folly-of-waste-to-energy-incineration#ixzz6sjKh0cH8