TEDx: Plastic Is the New Smoking 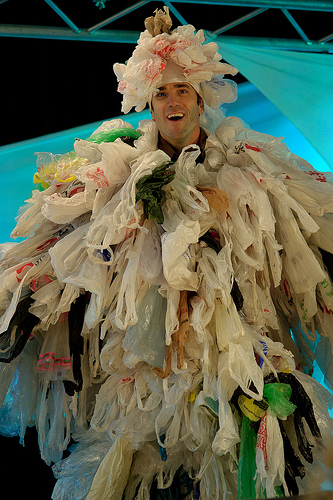 Think of the Gulf oil spill only a couple thousand miles longer. A loosely formed mass of plastic paraphernalia stretches from the beaches of Santa Monica, all the way across the Pacific Ocean, the other end of this unwieldy but deadly man made monster reaching the eastern Chinese coast. Thus the subject of a one-day conference at the Annenberg House entitled “The TED Great Pacific Garbage Patch” put on by the folks at the Plastic Pollution Coalition.

You may have heard of the TED conference, as in, Technology Entertainment and Design. This was an offshoot of the main TED event, limited to only 80 participants but available free online, as thousands of visitors watched at least part of the proceedings.

A variety of speakers and presentations were all geared around answering the critical question, “how can we live the same lives of convenience without plastics?” Makes you think of the old joke from The Graduate when Mrs. Robinson’s husband is counseling Benjamin (Dustin Hoffman) about his future. “Plastics my boy” was at the time a visionary recommendation. And how the worldwide manufacturing industry has embraced those words: over four decades of plastics addiction has caused a true unnatural disaster in our oceans. That’s what this conference tried to address.

You may have heard of the TED conference, as in, Technology Entertainment and Design. This was an offshoot of the main TED event, limited to only 80 participants but available free online, as thousands of visitors watched at least part of the proceedings.

A variety of speakers and presentations were all geared around answering the critical question, “how can we live the same lives of convenience without plastics?” Makes you think of the old joke from The Graduate when Mrs. Robinson’s husband is counseling Benjamin (Dustin Hoffman) about his future. “Plastics my boy” was at the time a visionary recommendation. And how the worldwide manufacturing industry has embraced those words: over four decades of plastics addiction has caused a true unnatural disaster in our oceans. That’s what this conference tried to address.

Suja Lowenthal, vice mayor of Long Beach, allocates millions of dollars annually to clear junk — mostly plastic — from the city’s beaches. She also documented the tens of millions that must be spent annually by Long Beach and Los Angeles to just pick up the plastic trash discarded by citizens. Loventhal thinks plastics abuse is indicative of a deeper societal problem. “We have convinced emerging societies that a sign of wealth, progress and their becoming truly middle class is usage of disposables, bottles, utensils and packaging.” We need to teach the masses to be eco-responsible, not just consumers. Obvious perhaps, but a challenge that will probably take decades to achieve.

Monica Wilson wants to end the use of incinerators to dispose of trash. When you think about it, incinerators seem on the surface to be a good idea as a huge pile of waste is reduced to a handful of ash. Unfortunately, the process releases dioxins, PCBs and other chemicals into the air. Just think about melting all that plastic, surely there are dangerous fumes released in the process. Wilson’s Global Alliance for Incineration Alternatives is trying to spread the word about the dangers of incineration worldwide.

Ken Cook heads Environmental Working Group, which believes that plastic pollution begins in the womb. They found BPA in nine of ten newborns tested per year, among other birth defects they claim are affected by the plastics waste we passively ingest.

Andy Keller is otherwise known as The Plastic Bag Monster. His company, ChicoBag, creates sustainable bags you can carry in your pocket. He also showed up in costume to spoof the pervasiveness of plastic bags in our daily life. The point was made: we can get by without, and the only way to do so will be to end single-use plastics.

To that end, a sea change (if I may use a bad pun) will never happen without getting business on board. Patrick McKenney has a plan for this: bioplastics, which use biopolymers instead of polymers. Industrial composting is another idea that needs critical mass to make an impact. “Plastic product owners don’t want to invest in R&D to retool their manufacturing,” explained McKenney. The only way we can make this happen is consumer pull-through, which will occur only if end use customers complain about plastic packaging and products and vote with their pocketbooks. Andy Behar is also encouraging business to move away from plastics through his “As You Sow” organization, which consults with corporations to increase their accountability. They serve as a policing body to ensure companies are in compliance with water and toxins regulations. They also use shareholder advocacy and the financial markets to catalyze positive change within publicly held companies.

To incentivize all this, TED XPrize honcho Ferris Thompson proposed a $10 million prize to the inventor who creates a commercial solution to cleaning up plastic polymer pollution and basically reinvents plastic as we know it. Although the TED XPrize qualifications are extensive, this appears to be a working model to spur innovation.

Van Jones, former environmental adviser to the Obama administration, suggests this is more of a socio-economic problem than we’d like to admit. “Higher income levels allow choices,” he explained. “Cheaper products are often the most dangerous. Poor people suffer the most both in production and usage of plastic packaging and products.” 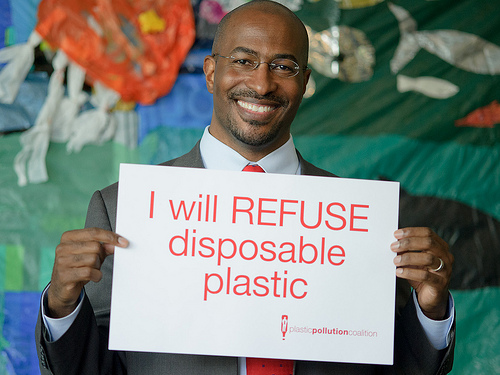 Indeed, one of the best goody bags ever included non-plastic lip balm from Organic Essence; a resuable bamboo utensils set that can replace plastic ones from To-Go Ware; a reusable sandwich bag from Graze Organic, and a glass straw from Glass Dharma. All packaged in a very handy lightweight fold-up shopping bag/backpack provided by ChicoBag. I call out the names of these products for a reason: we need to buy them to support the plastics reduction concept. If we don’t go out of our way to eliminate unnecessary plastics from our daily lives, we sure can’t expect the general public to do so. Also noteworthy is a new juice vending kiosk machine by Ecowell. I guzzled some super healthy, stunningly tasty fruit juice from this totally sustainable, no-waste system. Even Ecowell’s press kit is made from all recycled material.

We heard from David de Rothschild, who built the Plastiki, an ocean-going boat made from plastic water bottles and spent four months sailing it across the Pacific. He did this to raise awareness about the plastic pollution problem, quite effectively I might add.

Beth Terry is one of the most genuine “do not only as I say, but as I do” activists out there. She is living a life without plastic, and going to extreme lengths to do so. She literally laid out all of her plastics for the year on stage. This included mostly items for her cat, packaging from a gift, and prescription bottles. As an ex-accountant, when she mentioned she quantified her plastic consumption on a spreadsheet, it struck a chord. If we all took these extreme measures, maybe we’d understand just how much plastic we go through annually. Check out this all-important resource at www.fakeplasticfish.com to gain insight on plastic alternatives.

Other important speakers too numerous to mention all gave moving accounts of their work to help save the Pacific Ocean. Also noteworthy were performances by artists and musicians, tied into the subject matter. Several photographers and mixed media artists have done great works including photography of sea debris entitled “Drifters” by Georgia State professor Pam Longobardi and a song written by Jackson Browne and Dr. Sylvia Earle — performed live and in person, mind you, how great was that!? — dedicated to cleaning up the plastic waste in our oceans.

Any negatives about The TED Great Pacific Garbage Patch? Only that sometimes I feel we are preaching to a large choir. I have seen the pilgrims and they are us. That’s well and good, but somehow we have to sell the general public on what we are doing. Otherwise, even if all of the participants in this conference never use a shred of plastic for the remainder of their lives, not much will be gained to clean up the Pacific Ocean. We’ve got to get the trickle-down effect to make this all worthwhile.