Stories of Resilience During Lockdown

The pandemic has shattered the livelihoods and lives of millions of people across the globe.  Established states and systems are still trembling with the jolts pandemic gave to their structures, and so are individuals. Those living a sustainable life strived to live according to their principles of sustenance. Although the lockdown enforced in response to pandemic was initially lauded by some zealots for the resulting decline in greenhouse emissions and decrease in air pollution across the globe, the pandemic increased demand and consumption of single use plastics. Likewise, people used more disposable plastic cups and takeaway containers because of fear of getting infected from possibly contaminated reusable materials.

In these times, when sustainability and survivability was a challenge, there were some people who proved to be the sign of hope and resilience. When people were struggling to feed their families, some activists from Samaritan/Civic societies and organizations were on ground trying to ensure that nobody went to sleep hungry, and that no children are malnourished due to shortage of food, while keeping the dignity and privacy of beneficiaries intact. In some cities, people joined hands to clean their streets and beaches, while in other parts they were spreading information about segregating waste and disposing bio medical waste properly and effectively.

Hasiru Dala, a social impact organization in Bengaluru, India joined citizens, the State, and the local government to ensure that hope and solidarity is provided to the community of waste pickers, in particular and to the informal workers in general. The organization was actively involved in With Bengaluru, a consortium of Bangalore based NGOs and other social impact organizations that distributed relief kits to those badly impacted by the lockdown. The organization ensured that the distribution was humane, eco-friendly, inclusive, and takes into account different organizations and vulnerable groups like sex workers, migrant laborers, the elderly, pregnant women, among others.

The organization saw a wave of resilience in different quarters of the city when different sections of people came forward to help each other in this time of crisis.

In the Bengaluru neighborhood of JP Nagar (Jayaprakash Narayan Nagara), Hasiru Dala and WoW (women of wisdom) had established a community composting facility that served 70 households. During the lockdown, the city had limited waste management services which impacted the collection system. Collection services in JP Nagar, however, were not disrupted. Sorted waste continued to be collected and handled in the Dry Waste Collection Centre (DWCC) – a neighborhood dry waste aggregation center established and supported by the state and citizens, respectively.

Kumudha, an informal waste worker who operated the DWCC in Ward 177, created awareness videos about the effects of irresponsible disposal of PPE on workers with clear instructions on proper disposal of PPE and other potentially infectious materials to educate the citizens around her area who regularly gave waste to her. Her awareness videos went viral over social media and were widely shared by politicians, authorities, and citizens. As a result, we started to see the difference in people’s behavior around disposal of single-use PPEs. The eco warriors in the city and the local government also promoted reusable masks rather than single-use disposable masks. Being proactive about sustainable living during the pandemic  was laudable.

Hasiru Dala also created a poster that displayed a message from workers to citizens about the appropriate use of waste management systems, and created a podcast on how people could support the sanitation workers during the pandemic. 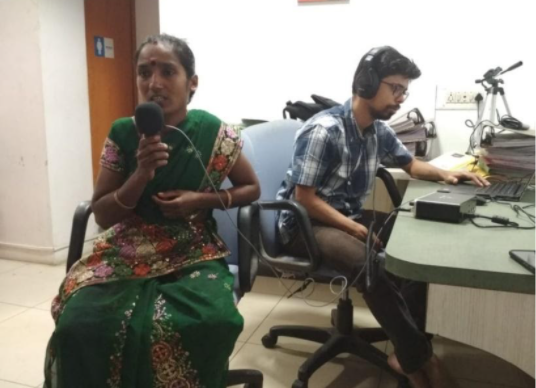 In the stories of hope and resilience that brought light to the dark phase of the pandemic lockdown is the story of Sampangi, a a waste picker who now operates an DWCC and went to the streets to find waste pickers to purchase their recyclable waste and paid them above the market prices she felt that would provide a source of income to those financially crippled while keeping their dignity intact. During the lockdown, although she suffered a loss of INR15,000 due to decline in prices of recyclable materials post-lockdown, she is glad that she was able to contribute to her community.

GAIA is grateful for the contributions from PPLH Bali. This feature is made possible through the Zero Waste Cities project — an initiative coordinated by GAIA Asia Pacific and funded by the Plastic Solutions Fund (PSF). The views expressed in this feature do not necessarily reflect that of its funders.