For over two decades, the New York City Environmental Justice Alliance (NYC-EJA) has been uniting grassroots organizations in low-income neighborhoods and communities of color throughout the city to support them in their struggle for environmental justice. Founded in 1991, NYC-EJA is engaged with issues ranging from climate justice, resiliency concerns and transportation equity, with a special focus on waste equity. NYC-EJA is also part of the Transform Don’t Trash coalition, working alongside organizations like ALIGN, International Brotherhood of Teamsters, New York Lawyers for the Public Interest, and Natural Resources Defense Council, in order to transform New York City’s commercial trash industry,  reduce waste and pollution, and foster clean and healthy communities.

Waste equity has always been at the top of a long list of priorities for NYC-EJA. One of their first campaigns focused on reducing the disproportionally large amount of waste dropped into low-income neighborhoods and communities of color where most transfer facilities are located. In July 2018, after decades of hard work and coalition-building, NYC-EJA and their partners celebrated a very important victory with the New York City Council´s passage of the “Waste Cap” (Intro 157) Bill, which was signed into law in August 2018. According to Priya Mulgaonkar, Policy Organizer at NYC-EJA, this Bill effectively “cuts the permitted capacity at the worst-acting private solid waste transfer stations in North Brooklyn, the South Bronx, and Southeast Queens.” [NYC-EJA members involved in the waste equity campaign include THE POINT CDC, Youth Ministries for Peace and Justice, Nos Quedamos, El Puente, and UPROSE. External partners include ALIGN, NRDC, NYLPI, and Teamsters. Just want to distinguish between the EJ groups and the allies.]

With a population of 8.6 million people, New York City generates roughly 35,000 tons of garbage every day. The city’s Sanitation Department handles a quarter of that figure, approximately 10,500 tons of waste from residential public buildings. The remaining 3 quarters of the city’s garbage, coming from commercial businesses, hotels, offices and restaurants, is handled by over 248 private carting companies that operate their own transfer stations with an army of 8,000 heavy-duty diesel trucks. This means that nearly 25,000 pounds of solid waste are hauled daily to a handful of low-income communities of color in North Brooklyn, Southeast Queens and the South Bronx where 26 of the city’s 38 transfer stations are located.

“Waste equity is a huge issue in New York. Over a decade ago these waste facilities were given twice [the necessary capacity] so they could expand their business. That, added to the thousands of miles travelled by privately operated trucks, represents a disproportionate burden that low-income and communities of color have to bear”, affirms Mulgaonkar. “This is why the waste bill was such an important achievement. Our biggest fight was to get political support from elected officials who said they represented the communities, but in their actions were representing the waste companies. A lot of organizing and mobilizations over the last 10 years have brought us to where we are now. Working in coalition is an important part of how we got the legislation passed.” 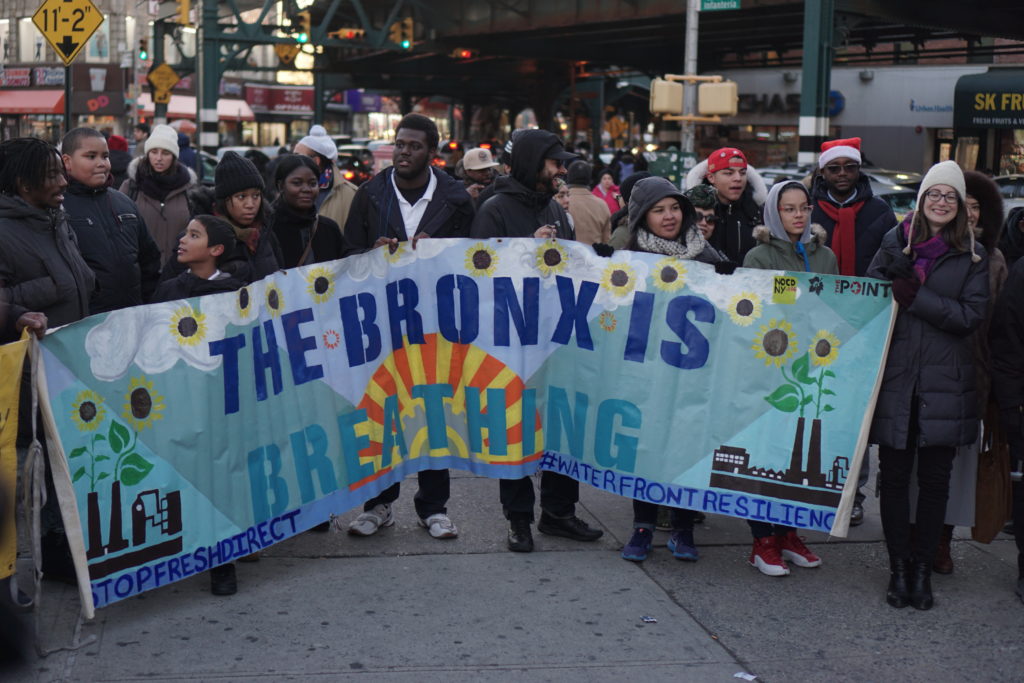 She goes on to explain that while a cap on waste represents a big milestone, there is still so much more that needs to be done. “On top of the inefficiencies in collection, these companies are bad actors that treat their workers – who are mostly people of color and immigrants – like trash. You have drivers forced to work eighteen hours shifts, covering insane routes and traveling up to 1,000 miles per night, driving outdated, unsafe vehicles and making poverty wages. It is a real issue of environmental racism and immigrant injustice, with no real oversight of how workers are treated.”

One solution proposed by NYC-EJA and their partners is a zoning system for commercial waste that would force private carters to compete for the collection zones and comply with labor, environmental and quality standards. After nearly three years of campaigning, Transform Don’t Trash – NYC got a commitment from the city to develop a zoning system, but they still have to face the powerful business interests that profit from the current system before the City Council pases this important legislation. 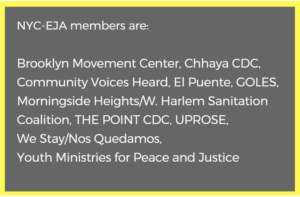 With this uphill battle on the horizon, NYC-EJA is far from discouraged. They are confident that strong, empowered communities and alliance-building can defy even the powerful interests that hide behind our waste systems. Real leadership, community-led intervention, and on the ground expertise have been at the core of NYC-EJA’s work for over two decades, allowing them to achieve victory after victory. Their multifaceted approach to climate action structures their advocacy, research and campaigns. And while waste equity is one of their primary focuses, it is also just one strand in an intricate web of strategies and alliances that they have built to advance an environmental justice agenda. “The historical waste equity fight continues, but climate change impacts are becoming increasingly important for EJ communities,” explains Mulgaonkar, “Our communities deserve good clean jobs and safe living situations. We want people that have been marginalized from the economy, and communities that are most vulnerable to climate change to be in charge of the transition towards clean energy and reap the benefits of it.”

NYC-EJA’s will continue to work tirelessly with community-based organizations, labor unions, faith groups, volunteers, business leaders and advocates across the board to combat the issues that threaten the ability of low-income and communities of color to thrive, and create economic alternatives and environmentally safe livelihoods for all communities and working people. Understanding the cross-sectionality of waste and climate issues, like NYC-EJA does,  is a critical step towards equity and justice in our policies and making environmental justice a reality for all.