We Can’t Burn Away Our Plastic Problem 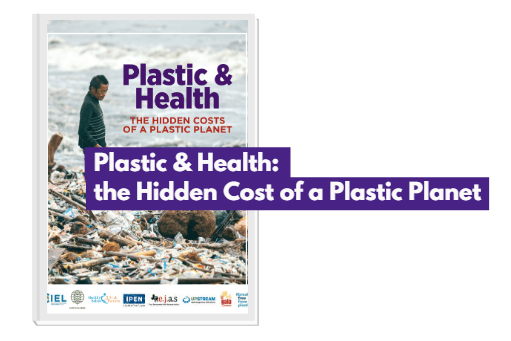 When we hear about plastic pollution, it often takes the form of sea turtles with straws up their noses, seals with plastic nets around their necks, and seabirds with soda caps in their stomachs. But as horrible as those images are, unfortunately there is yet another form of plastic pollution that is less visible but no less dangerous.

Today, GAIA joined Center for International Environmental Law along with co-collaborators Earthworks, Tejas, Upstream, Break Free From Plastic, Healthy Babies Bright Futures, and IPEN to release the report, “The Hidden Costs of a Plastic Planet.” This groundbreaking report covers the health impacts of plastic throughout its lifecycle, including from incineration.

Over 12% of plastic is burned in incinerators worldwide, turning one form of pollution into another, whether it be toxic air emissions, ash, or wastewater. The kinds of toxic chemicals released when you burn plastic include dioxins, furans, mercury, persistent organic pollutants such as polychlorinated Biphenyls(PCBs)and a host of others. These chemicals are next to impossible to get rid of– they can travel long distances and get into our soil, water, plants and accumulate in people’s bodies, wreaking havoc on human health.

In South Baltimore, where the infamously polluting Wheelabrator trash incinerator is located, noxious odors are a regular feature in people’s lives, as are the headaches, respiratory illness, and shorter lifespans. The Wheelabrator Baltimore incinerator is the city’s single largest source of industrial air pollution, and its emissions cause an estimated $55 million in health care expenses annually.

In Detroit, the incinerator has exceeded emissions standards over 750 times in the last 5 years alone. Although resident Andrew Kemp is an avid gardener, he has to leave his garden untended if the wind is blowing from the West, bringing incinerator fumes with it. After moving to the neighborhood he developed asthma, and now can no longer play basketball or do any other high-intensity sport. As Kemp says, when you live in Detroit, “It is indeed ironic that many activities that are considered healthy, even doctor prescribed, are hazardous activities.” 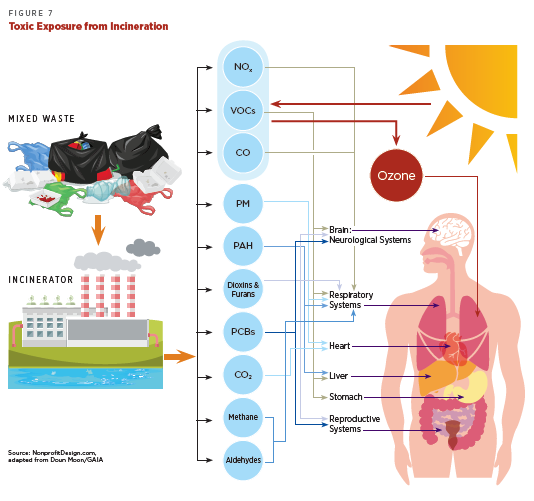 Studies show that most incinerators are located in low income communities and communities of color, who must bear the burden of toxic incinerator emissions. As Laura Cortez of East Yard Communities for Environmental Justice, a grassroots organization that fights the nearby incinerator in Long Beach, CA, puts it, “No community should have to breathe in the pollution from other people’s garbage.”

The injustice of incinerator citings are not unique to to the United States, but are plaguing communities around the world. Even the most “state of the art” incinerators in Europe have been shown to have serious problems. Long-term testing of the youngest of Dutch incinerators revealed the plant emits dioxin, furans and toxic pollutants far beyond the limits set by EU laws. In 2013, a study by ToxicoWatch found high concentration of dioxins and furans in eggs of backyard chickens located near the incinerator. Even if these toxic pollutants are captured, they have to go somewhere. The resulting ash may end up in many places: landfills, mixed with cement, dumped on open lands, agricultural lands, and on islands and wetlands, where they migrate into the water supply.

In addition to so-called ‘waste-to-energy,’ other forms of incineration that are less well-known or maligned by the public have started to surface in response to the growing outcry over plastic pollution. Treatments like gasification and pyrolysis or plastic-to-fuel have been increasingly presented as a “solution” to plastic waste, differentiating themselves from conventional incinerators.

However these kinds of approaches bring with them a variety of concerns. Firstly, gasification of waste produces highly toxic carbon monoxide and toxic hydrocarbons in concentrations far above the fatal dosage. These unavoidable by-products of gasification can escape to the air in the case of pressure build-up. Additionally, plastic-derived fuel produces higher exhaust emissions compared to diesel, and is next to impossible to monitor once it is sold to industries with less stringent air pollution control standards.

The trash incineration industry claims it will grow by 5% each year. The plastic industry plans to increase production by 40% in the next decade alone. If all this comes to pass, the incineration industry will double in size by 2025 and burn over 6 million tons of waste per day, the same weight as 5,000 blue whales. If we are to stop this growing cycle of polluting and burning, we need to join incinerator impacted communities in calling out the incinerator and plastic industries for what they are: a load of garbage.