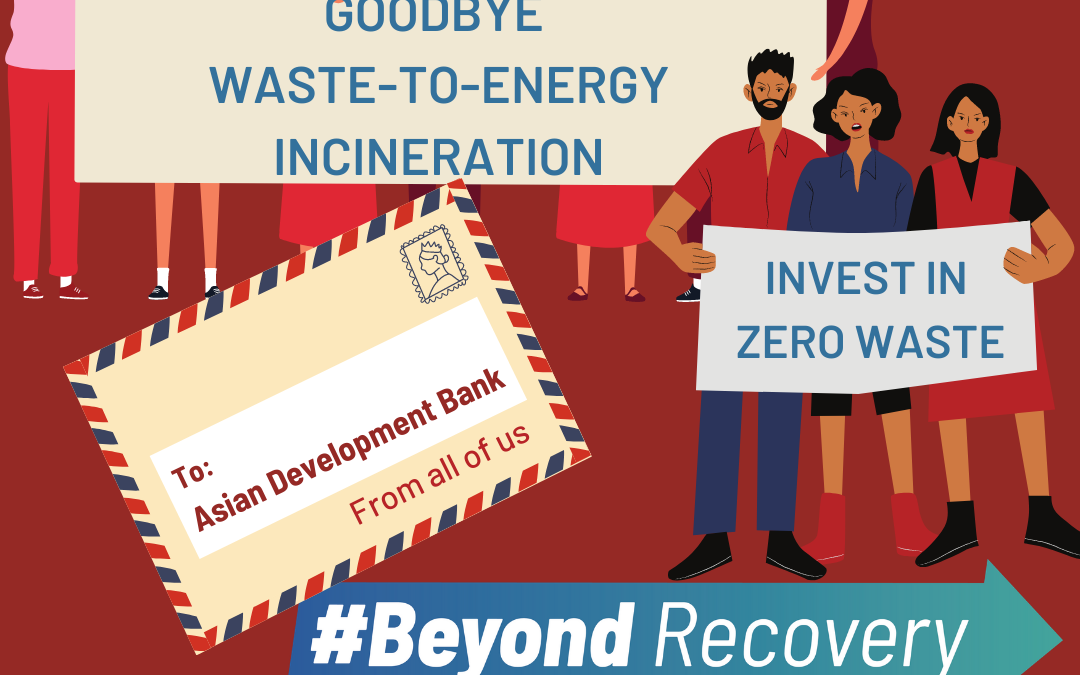 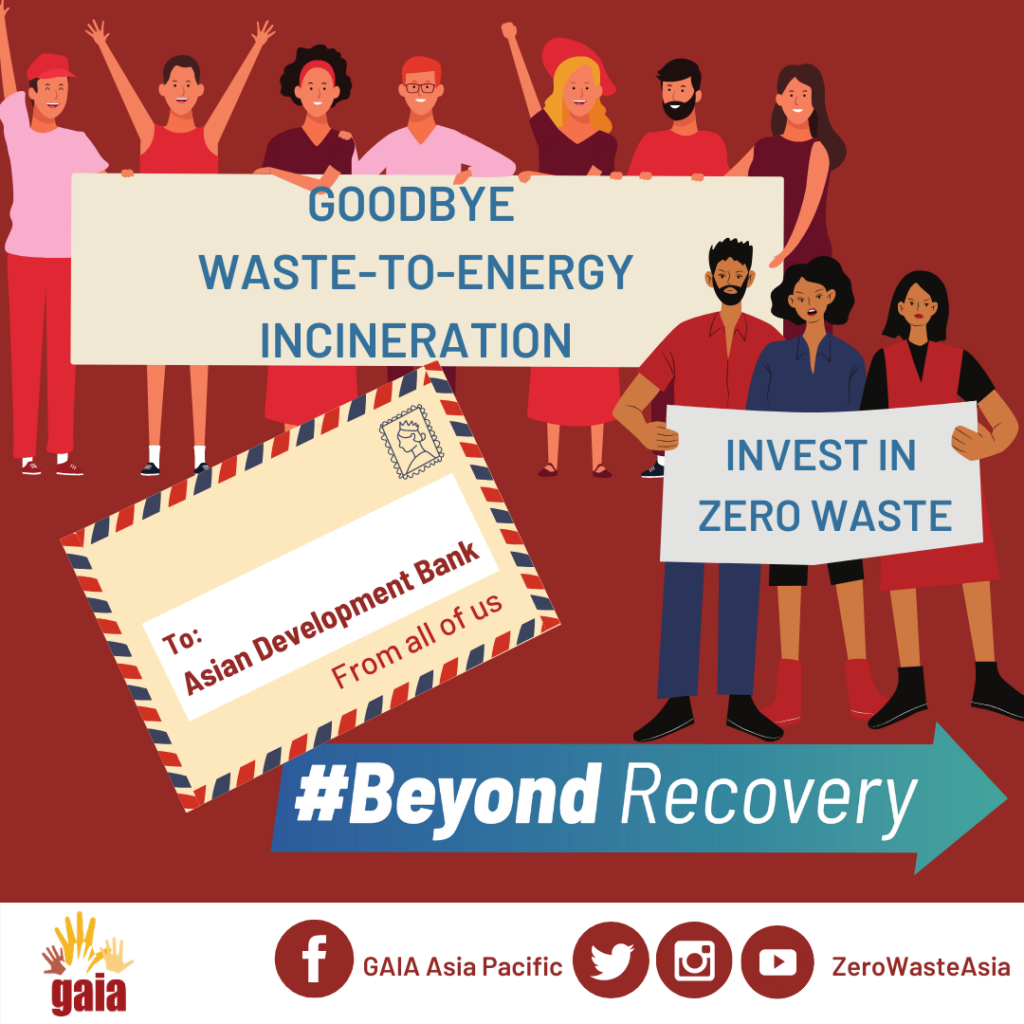 In a letter addressed to the Bank, the groups called on ADB to exclude waste-to-energy (WtE) incineration and other thermal-based technologies from the list of renewable energy sources and climate mitigation activities in its Energy Policy and other financial instruments. They recommended ADB to align itself with government-led climate action commitments made during the Climate Ambition Summit 2020.

“There is no reason why international financial institutions  (IFIs)  like the ADB should classify WtE incinerators as climate mitigation. Science and experience show that these dirty, waste-of-energy machines  are contributing to global warming as much as fossil fuel-based sources of energy, and are causing harmful effects on human health,“ Froilan Grate, GAIA Asia Pacific Regional Coordinator, said. “The ADB has been ignoring scientific evidence, government policies, and community sentiments critical to WtE incineration.”

The letter, sent ahead of the ADB’s major policy review processes on energy and safeguards  on 8 March 2021, was facilitated by the Global Alliance for Incinerator Alternatives. It was signed by non-profit organizations and social movements such as GAIA, Greenpeace, Oceana, Center for International Law ,  Zero Waste Europe, —all members of the global movement Break Free From Plastic— and International Accountability Project, 350.org Asia, NGO Forum on ADB, and regional and national Zero Waste movements.

The ADB is undertaking major revisions in two of its policies—Energy Policy and the Safeguard Policy Statement—that will impact on the region’s immediate needs to both recover sustainably and act on the climate crisis. Aside from demanding ADB to divest from WtE incineration, the groups are also calling for better implementation of ADB’s social and environmental safeguard standards in developing member countries such as Maldives and the Philippines, where WtE incineration projects are underway.

ADB’s so-called “clean energy” financing in the last decade is valued at over $23 billion. The portfolio includes WtE incineration, which has been excluded in the latest EU Taxonomy Report—a listing of economic activities that are considered “’sustainable finance.” WtE incineration has low resource efficiency and high loss in economic value of potentially recyclable materials.

Under the ADB Strategy 2030, the Bank committed to shifting 75%of its operations towards supporting climate change mitigation and adaptation, as well as providing $80 billion for climate financing, by 2030.

“The growing interest in making recovery packages stimulating not only for the economy but also for the environment is a  welcome progress in addition to the increasing number of green  funding mechanisms. But we should be prudent in identifying which green activities deserve incentives and public guarantees as we are currently facing multiple crises,” Grate said.

The groups asserted that WtE incineration is not an efficient source of energy. Waste in developing countries have a high moisture content which reduces the energy recovery efficiency of waste incineration.

They added that WtE projects pose irreversible and long-term fiscal, environmental and social risks for ADB and its borrowing countries which are already saddled by recovery loans. The letter outlined these risks.

The letter also debunked WtE as a climate mitigation activity, saying that on the contrary, it is a hindrance toward decarbonization. It cited experiences of the European Union and the United States showing WTE incinerators’ contributions to GHG emissions.

The letter also highlighted that the graver and long-term consequences are externalized by communities and the environment for generations. “WtE incineration burn various materials which contain hazardous and toxic content such as heavy metals, polychlorinated biphenyls (PCBs), and brominated polyaromatic hydrocarbons (PAHS) which are proven to cause neoplasia, congenital anomalies, infant deaths and miscarriage, cancer, and other life-threatening illnesses,“ the letter stated.

To date, ADB has not responded to the letter.

GAIA is mounting a series of protests in the region toward a Global Day of Action (GDA) on March 31 with Zero Waste advocates, climate justice movements, and communities affected by WtE incineration projects.

Waste pickers and workers are also joining the GDA to call for better representation in consultation processes involving solid waste management and incineration projects because of the latter’s impact on livelihoods and work spaces. A full list of demands can be found here.

This year’s GDA carries the theme #BeyondRecovery to challenge world leaders to do more than just recover from the devastating impacts of its single economic growth-driven models without considering the environmental and social consequences of policy and investment decisions.

It is a day to call on IFIs to divest from incinerators and invest in local solutions in its recovery plans, and on governments to put communities first by being fully transparent and inclusive with regards to how taxes are being spent in this time of crises, not least by ensuring that meaningful consultations are held with civil society and affected communities early on in the process of developing recovery roadmaps and legislations.

Link to the full letter https://www.no-burn.org/wp-content/uploads/Sign-on-letter-to-ADB-EDs-ADB-Energy-Policy.pdf

GAIA is a worldwide alliance of more than 800 grassroots groups, non-governmental organizations, and individuals in over 90 countries. The organization works to catalyze a global shift towards environmental justice by strengthening grassroots social movements that advance solutions to waste and pollution.