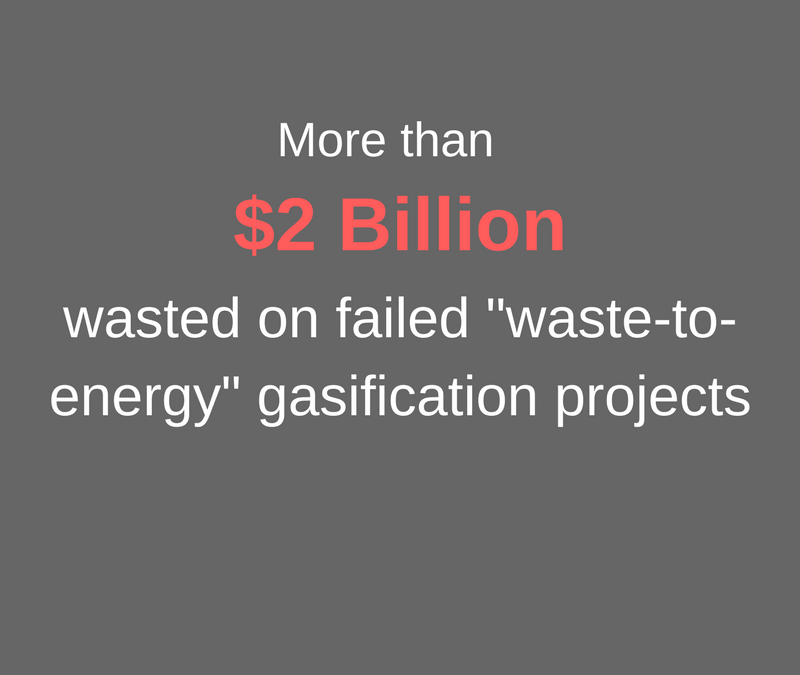 Gasification and pyrolysis attempt to convert solid waste into synthetic gas or oils, followed by combustion (meaning they are regulated in U.S. and EU as waste incinerators). Companies have been experimenting with these technologies for over three decades. This report finds that while there is little data available on the operations of attempted commercial facilities, there are numerous examples of plants that have been forced to shut down due to technical failures and financial failures. Other projects have failed in the proposals stage after raising significant investments due to community opposition and government scrutiny into false and exaggerated claims.

Over $2 billion was invested in the projects listed in this report alone, all of which closed or were canceled before commencing operations. Companies involved include Air Products& Chemicals, Thermoselect, Plasco, Compact Power, Caithness, Interserve, and Brightstar.

We conclude that the potential returns on waste gasification are smaller and more uncertain, and the risks much higher, than proponents claim. Municipal programs that rely on waste prevention strategies, source separation, intensive recycling and composting, and redesign of no-value products have demonstrated economic and technical success.

Read the full report
Read the report in Chinese