MANILA, Philippines (June 28, 2019) — As the G20 summit opens in Osaka, Japan, a coalition of more than 800 environmental organizations worldwide is challenging the heads of state to show leadership in tackling the plastic pollution crisis by addressing overproduction, rather than focusing on waste. The proposed voluntary marine plastics framework does not address the fundamental cause of plastic pollution: the overproduction of plastic. 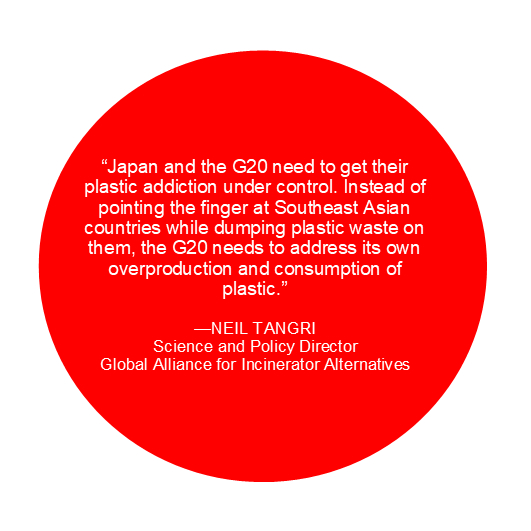 “As the second-largest consumer of plastic in the world, Japan should show leadership by reducing consumption and production of plastic, especially single-use plastics,” said Beau Baconguis, Asia Pacific Plastics Campaigner of the Global Alliance for Incinerator Alternatives and concurrently Asia Pacific coordinator of the global #breakfreefromplastic movement.

Two weeks ago, a meeting of G20 environmental ministers in Japan resulted in a voluntary initiative to share best practices and establish standards for tracking marine plastic waste, but it stopped short of setting clear indicators or a timeline for progress. It is also largely an implementation framework for the “G20 action plan on marine litter”  adopted at the G20 Hamburg Summit in Germany in 2017. The 2017 action plan focuses mostly on plastic waste and marine plastics, rather than on accelerating production and consumption, or impacts on land, air, and freshwater ecosystems.

“Plastic pollutes throughout its lifecycle — from oil and gas extraction to production all the way to final disposal. It is not only a marine litter issue. It is more importantly an overproduction issue. The G20 and Japan need to deal with the plastic pollution crisis in a holistic manner,” added Baconguis.

Most recently, Japan has announced setting aside USD 18.6 million to promote waste incineration in Southeast Asian countries. Through public-private partnerships, waste-to-energy (WTE) incineration plants will find their way to Indonesia, Philippines, and Vietnam.

“WTE Incineration directly undermines waste reduction, reuse and recycling, and incinerating plastics exacerbates climate change, and creates toxic pollution and hazardous ash. If Japan and other G20 governments are serious about resolving the plastic pollution crisis and about responding to the climate emergency, they must stop using this outdated technology and stop pushing it on other countries,” said Sirine Rached, Global Policy Advocate at GAIA.

“There is no solution to the plastic problem or to climate change that allows the industry to continue growing at 4% per year. It is time for the G-20 to rein in the oil, gas, and petrochemical industries starting with broad bans on single-use plastics,” Rached added.

A 2018 UN Environment Programme report identified Japan as the world’s second largest consumer of single-use plastic packaging per person — behind the United States. G-20 nations produce half of the world’s plastic waste. Abe, who chairs the summit, has already given his intentions to prioritize this issue at the G20 summit and through domestic policies in Japan.

“Japan and the G20 need to get their plastic addiction under control. Instead of pointing the finger at Southeast Asian countries while dumping plastic waste on them, the G20 needs to address its own overproduction and consumption of plastic,” said Neil Tangri, Science and Policy Director for GAIA.

About BFFP –  #breakfreefromplastic is a global movement envisioning a future free from plastic pollution. Since its launch in September 2016, over 1,400 non-governmental organizations from across the world have joined the movement to demand massive reductions in single-use plastics and to push for lasting solutions to the plastic pollution crisis. These organizations share the common values of environmental protection and social justice, which guide their work at the community level and represent a global, unified vision. www.breakfreefromplastic.org.