Catching up with… Huub Scheele, member of GAIA’s Global Advisory Hub and member of Zero Waste Europe’s Board 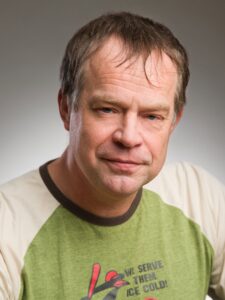 Huub grew up in Zwijndrecht, a small-town near the port of Rotterdam (Netherlands). His persistent interest in the environment and nature led him to choose environmental sciences as his higher education course. He has spent 20 years working on monitoring monetary and financial institutions, and has been working on waste trade issues since the 1990s. Once he answered the GAIA and Zero Waste Europe call, he knew he had made a commitment for life. He thinks GAIA can be likened to one of the smallest but most fascinating living organisms in the world – take a walk down the GAIA memory lane with Huub Scheele!

Huub’s GAIA experience started in a very unique way. It all comes back to the link between Global Alliance for Incineration Alternatives (GAIA) and the creation of Zero Waste Europe (ZWE): while GAIA was created in 2000 by several existing organisations, its European branch was created in 2010 by GAIA as a result of its increasing activities.

Even though Huub was not around for the first GAIA meeting ever, he has plenty to tell about his first contact with GAIA – and what an interesting journey that was!

“Even though I only fully joined GAIA in 2010 through the creation of ZWE, I had gotten to know quite a few of its people over the years. I had been working in the bank-watching sector for 20 years, and around 1990 I started getting involved in waste issues in the Netherlands campaigning to stop hazardous waste exports to a dump in Schönberg in Eastern Germany. I met a lot of GAIA people like Annie Leonard and Monica Wilson through that cause, and also demonstrations in Madrid during the World Bank annual meeting some years before that,” recounts Huub.

A turning point occurred in 2010, when Christie Keith (GAIA’s International Coordinator), Joan Marc Simon, and Mariel Vilella (both now at Zero Waste Europe) expanded the GAIA concept from a focus on fighting incineration in a very adversarial style to fighting waste through a solution-driven approach. The time was ripe for change: not only had the European Parliament realised there was a need for this kind of movement, but investors and funders were also starting to get interested in sustainability and circularity topics.

“Mariel and Joan Marc contacted me to help set up Zero Waste Europe as an entity in the Netherlands and to help with fundraising. Remember that my regular job had to do with monitoring for financial and banking institutions – I was dealing with papers and lawyers, chambers of commerce and banks, tax administrations and so forth… so I was working on environmental issues but was not really deeply into waste issues. When I was asked by ZWE and GAIA to help, I thought ‘this is fun and I can help them, so let’s do it’,” explains Huub, whose views on the incineration situation in the Netherlands acted as extra motivation. “I was very happy to join a solution-oriented organisation which dealt with the questions I was constantly asking myself: ‘How can we stop these reckless waste exports? How can we stop these appalling incinerators?’ GAIA was dealing with the same questions and had good answers to these questions.”

Huub has fond memories of his first GAIA meeting – which, incidentally, was his first ZWE meeting too. “It was a surprise for me to see quite a few older people in the hotel lobby – you see, I was expecting the more usual crowd of younger activists! That came shortly after, though, as we met with French zero waste groups and they had plenty of young people working on composting activities, alternative lifestyles, and opposing incinerators. Overall, it was very different from what I expected and there was a big positive vibe among all the 200-something people who were there. I was really happy to be a part of it.”

Spontaneity, solidarity, collaboration, and an unexpected approach to things remain a GAIA trademark, and, for Huub, are best seen during the alliance’s general meetings:

“GAIA general meetings are always very playful, with lots of fun ways to work, social moments, icebreakers and interactions. GAIA makes you feel like you are one big family.”

“I was at the 2018 GAIA meeting in Marrakesh which was full of what I call the ‘GAIA working techniques’ – for example, as part of a given activity you will have to find your favourite animal. There are also a lot of smaller working groups and everything is planned in a way that is meant to really involve you in the activities.”

In 20 years of GAIA, there are so many achievements and success stories that it can be hard to select your favourites or those which you consider being the most important. But for Huub, the work on the promotion of zero waste cities, as well as the worldwide education groups on incineration and how to fight it, are two big frontrunners. What’s more, GAIA has had so many big victories over the last two decades that, according to Huub, it has often acted as an incubator:

“It sometimes happens that GAIA’s success stories and achievements tend to become their own thing – a ‘spinoff’, if you will. I guess the best example of a ‘spinoff’ is GAIA’s work on plastic, which is now done through the Break Free From Plastic movement. The people working on the Basel Network and waste trade can also be considered a ‘spinoff’ right now.”

People are also very proud of what they call “the GAIA culture”, with a strong emphasis on solidarity, bottom-up movements, and the very democratic approach to the way the alliance discusses, decides, and implements activities. “You also get so much information, education, and training out of the network! Whenever I need to reach out, there’s also someone with specific knowledge from a specific country – things can evolve very quickly due to this collective knowledge” says Huub.

For all of these reasons, and ever a fan of analogies, Huub thinks that GAIA can best be described as an amoeba: “I know it’s a not very attractive being and you probably wouldn’t (and cannot) choose it as a pet, but it’s an organism that can change shape into anything it wants and reproduces itself in funny ways that you would not always expect! Having been around for ages they show an enormous diversity for one single cell. I think it’s a good animal reflection of GAIA’s existence.”

The last decade saw important shifts in humanity’s relationship with nature, with concepts such as zero waste and circular economy becoming more widespread and part of many binding and non-binding legislation documents across the world. Grassroots and bottom-up movements have pushed for a faster transition to a new and better global society, keeping governments and industries accountable for their impact on the environment and people’s health and well-being. For GAIA, the current COVID-19 crisis acts not as an obstacle, but as another reason why a change for the better is urgently needed.

“GAIA has a very big role to play in the current worldwide investment wave that is presented as response to the COVID-19 crisis. It is clear that we cannot carry on with a ‘business as usual’ mindset: we need to use this wave of investments to set up something better and build a better society. In this sense, the circular economy and zero waste approaches can be used by GAIA to change the economic and political system,” urges Huub. “With COVID-19, people started thinking again about the way things are produced and consumed – produced in Asia, then shipped around the world, with waste coming back around. I think people are more aware now that we should break away from this economic model, and GAIA should definitely be a part of it – it’s time to change the narrative of development.”