New Report: The Age of Incinerators in the U.S. is Ending

Today, The Tishman Environment and Design Center at The New School in New York City has released a report that confirms what we’ve long known to be true: the people who have the least responsibility for the waste crisis in the U.S.–low income communities and communities of color–are forced to pay the highest price, both with their pocketbooks, and their health. The report is the first to uncover that among the 73 incinerators that remain in the U.S., approximately 8 out of 10 are located in environmental justice communities, populations that are already overburdened by pollution from other industrial sources, causing cumulative impacts that regulators fail to take into account when setting emissions regulations.

The report is the first to uncover that among the 73 incinerators that remain in the U.S., approximately 8 out of 10 are located in environmental justice communities…

Approximately 4.4 million people across the U.S. are exposed to pollution from incinerators.

In a comprehensive study of the industry in the U.S. from its rise in the 1980’s to today, the report paints a picture of an aging, costly, and polluting industry that is under increasing pressure from both economic, regulatory forces and community action. Their business model counts on lax regulations and enforcement, shifting the economic and human health burdens onto taxpayers, leaching off of renewable energy subsidies, and furthering environmental racism. 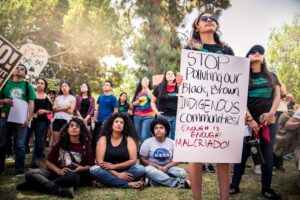 One thing that the report makes abundantly clear is that government regulations and enforcement aren’t doing enough to protect people from incinerator pollution. In addition to neglecting cumulative impacts of pollution when setting emissions limits, most of an incinerator’s emissions are reported to the U.S. EPA by the facilities themselves, and the operators often test during “optimal operating times” to avoid testing at times when incinerators are likely to emit the most pollutants. Only a small number of pollutant emissions are continuously monitored.

Burning waste produces toxic pollutants that can– even in the most trace amounts– severely threaten human health. Destiny Watford, life-long Baltimore resident and community organizer with United Workers in Baltimore, explains, “The BRESCO incinerator creates one-third of the air pollution in Baltimore City, and is responsible for $55 Million dollars in asthma hospitalizations and other health impacts,” says “I–my family, friends, and everyone who lives in Curtis Bay can expect to have an entire decade shaved off of our lives because of where we live. I’m more likely to die of lung cancer, respiratory disease, and to suffer from asthma.”

“I–my family, friends, and everyone who lives in Curtis Bay can expect to have an entire decade shaved off of our lives because of where we live. I’m more likely to die of lung cancer, respiratory disease, and to suffer from asthma.”

To add insult to injury, enforcement officials are slower to respond to incidences of violations and have historically set lower fines for facilities located in low income and communities of color compared to more affluent, white communities. In fact, many of the permit exceedances reported by incinerators are not fined by state regulatory agencies. Why are enforcement agencies giving incinerators a “get out of jail free” card?

In addition to being a public health threat, incinerators are a bad investment. Burning trash is one of the most expensive forms of energy generation in the U.S., and these costs are often borne by the public in the form of public financing and fees. If the plant is unable to raise enough revenue through tipping fees or electricity sales to service the debt, taxpayers may be on the hook. Cities who have invested in incinerators have lost millions of dollars, and some have even declared bankruptcy. Taxpayers have to pay for their city’s costly mistake. Cities like Baltimore, Maryland Harrisburg, Pennsylvania and Detroit, Michigan all faced debt payments to and lawsuits from the incinerator industry that threatened their cities’ fiscal stability.

Although the industry has caused significant damage to communities for decades, thanks to community activism, tougher legislation, and increasing awareness of the dangers of incineration and the opportunities for cities to reduce waste, the conditions that have propped up the failing industry for so long are finally changing. As these incinerators get closer to the end of their lifespans, and their contracts with cities are set to expire, cities now have an opportunity to break loose from these dinosaur facilities and transition to a sustainable future that focuses on reducing waste, instead of burning it.

“…our communities are resilient, and will continue to fight for solutions like zero waste and zero emissions.”

Cities around the country are recognizing that incineration is standing in the way of progress–since 2000, over 30 incinerators have closed, several in the past year alone! Zero waste infrastructure creates 10x more jobs than landfills and incinerators, a solid investment in local communities and the future of our planet. As Whitney Amaya, Zero Waste Community Organizer at East Yard Communities for Environmental Justice in Long Beach, CA puts it, “Despite what city officials and government agencies think or say, landfilling or burning are not the only options available to manage waste. Our communities have long-standing traditions and practices rooted in a deep connection and relationship with the land that corporations and institutions have tried to stamp out for centuries. But our communities are resilient, and will continue to fight for solutions like zero waste and zero emissions.”